By Century Financial in Investment Insights 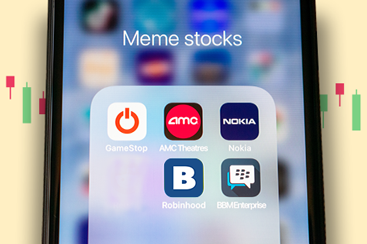 As we are set to usher into second half of the year/ H2, meme stock buzz is heightened with companies like Cleveland-Cliffs, Invesco Mortgage Capital, Clover Health, Wendy's, Geo Group, Clean Energy, joining the craze.

The term ‘meme stocks’ takes its roots from the web-based discussion forum Reddit, wherein rise in popularity of the sub-reddit forum — WallStreetBets — among stock and options traders, has had a major influence on US and UK-based exchanges in recent times.

Meme stocks typically refer to the sensitive stocks that are increasingly discussed across various online social media platforms such as Reddit, Discord and Twitter, and also have the attention from influential personalities.

The ongoing buzz over a specific stock urges retail investors to purchase the stock with the understanding that its share price might rally.

This triggers a huge increase in total traded volume for any particular company’s stock, and significant price fluctuations. Notably, this meme stock party despite being a prevalent topic of controversy and debate, has kept the US stock markets, in particular, lively of late.

The meme stock ecosystem is seen to have often favoured the companies with significant 'short' interest, in a bid to sort of 'squeeze' any investor who is shorting the stock keen on covering their short.

The exponential returns provided in a very short period of time are alluring enough for investors to add them to their watchlist.

Read further to find out how meme stocks can lead to gains and losses for traders. We discuss some of the highly trending meme stocks characterized with fluctuations in share prices, in recent times, to watch this summer.

Around the end of January, 2021, WallStreetBets users condemned large financial organisations and hedge funds for the continued shorting of struggling stocks including GameStop and AMC Entertainment.

This resulted in retail traders purchasing significant number of shares in these companies to tap gains stemming from a buy-and-hold approach. The news of a short squeeze then became viral, drawing a lot of investor interest.

The following cycle is an attempt to explain how meme stocks tend to work in the share market, as deciphered by a user of the WallStreetBets forum.

1. Early adopter phase: A company is identified to be undervalued by a significant number of retail investors, so they start to place buy orders.

2. Middle Phase: The stock starts to gain interest from other traders, who join in the process. Its share price elevates even further.

3. Late/FOMO Phase: The stock earns viral attention across social media and other online platforms. Investors that are late to the process all purchase shares at once with the fear of missing out or FOMOing on potential profits. This is where short sellers join in too.

4. Profit-Taking Phase: Buying peaks and some of the first traders involved start to close out positions. This leads to a new panic selling phase as investors do not want to lose money when the share price starts to fall.

5. Set For Next Cycle: Following the crash, the stock may trade sideways and see little activity for a few weeks or months until buyers regain interest.

Whereas retail traders could most likely rake in profits from rising share prices, on the other hand, institutional investors or hedge funds may endure losses if they have been short selling units of the affected stock.

If a hedge fund is betting that the price of a certain stock will decrease but all of a sudden, opposite starts to happen, it leaves them no choice but to cover their short position by buying the stock to avoid loss. This mad scramble of investors all fighting to buy the stock causes what is referred to as a short squeeze, which can be a costly process for shorts.

Sometimes, meme companies tap the market for more funding by issuing new shares, taking advantage of the frenzied interest in their company to bolster their balance sheets for the future. They may also do this to increase investment in strategic goals such as marketing and consumer appeal. However, this extra supply of shares hasn’t deterred the investment community much during this meme stock boom, and investors still appear confident in their buy-and-hold approach.

The most prominent example of a recent meme stock controversy involves the US video gaming and consumer electronics retailer, GameStop. Looking at the company’s financials pre-2021 suggests that it was struggling, and its share price history highlighted a long-term decline.

However, tables turned by the morning of 28 January, the stock hit an all-time high of $483. This resulted in huge losses for the hedge funds who were caught short, and causing various brokers to limit trading GameStop and other associated shares until the period of volatility was over.

Even then, its share price plunged after a week to $40, but peaked once again a month later. GameStop is up 1,187% year to date as of mid-2021 and the volatility surrounding the company is still present. So if you are looking for a volatile meme stock, then this company has to top the list.

Another struggling company that has seen its share price rise steeply is US-based movie theatre chain AMC Entertainment. Before 2021, AMC Entertainment was considered to be one of the penny stocks, trading at around $4 per share. Following the GameStop frenzy at the beginning of the year, traders also turned started taking interest in other companies with high levels of short interest. This led to AMC’s share price to reach a high of $36 at the end of March.

Throughout May 2021, the share price of the company shoot up by 570% to reach a peak closing price of $63.97. It is regularly at the top of the WallStreetBets mention list as one of the most trending meme stocks of the year, up 823% year to date.

BlackBerry Ltd, a Canadian company that specialises in enterprise and security software services, makes it to the list of meme stocks, as short interest resulted in the company’s stock price hitting a four-year high.

The parent company of mobile phone manufacturing brand BlackBerry, company was struggling at around $9 before the meme stock craze led boom, following which its share price more than tripled to a 52-week high of $28.77.

Shares of BlackBerry rocketed sharply, by almost 55% throughout May 2021. In the same month, the company entered into a five-year partnership with the University of Waterloo in a bid to drive research and development and innovation in Canada. This could indicate exciting new projects from BlackBerry in the forthcoming years, making it a stock to watch.

Bed Bath & Beyond stock had been fluctuating for some time prior to the meme stock mania commenced. The company was compelled to shut down over 20% of its stores across the US in 2020. Markedly, the home furnishings retailer is up about 60% as of June 2021 when compared with the previous month.

Even though Bed Bath & Beyond is showing characteristics of a trending meme stock with a rising share price, its CEO, Mark Tritton, does not consider that stock market activity will influence the company’s operations. He also has not underscored a preference for long-term investors or short-term retail traders, so this could be a company worth adding to watchlist for both types of traders.

Last but not the least, Nokia apparently joined the meme stock list by WallStreetBets owing to its exposure in 5G technology. The COVID-19 pandemic led to a slowdown in the rollout of 5G globally. Following this considerable number of hedge funds and institutional traders were shorting Nokia stock.

In January 2021, there was a spike in bullish sentiment for the company’s stock and a short squeeze followed over a single day. Consequently, Nokia’s share price soared by 106%. Although it fell back to its original price in the days to have followed, it has been inching up and pulling back over the months of May and June, so investors may ponder if another short squeeze is looming.

Notably, out of the aforementioned five meme stocks, Nokia has the current largest market capitalisation and huge global presence, with operations in over 130 countries. Therefore, some investors may also consider Nokia beyond a meme stock and as a company with long-term investment potential, dividing investor sentiment.

How to Play Meme Stocks

1. Open an account to trade on the live markets. Please note that shorting restrictions may apply to individual shares on our platform.

2. Choose your product between spread betting and CFDs. Notably, spread betting is tax-free across the UK* and does not require you to pay commission fees on share profits, and can be useful for short-term traders.

3. Trading on meme stocks can be a volatile and unpredictable process, so it is important to learn about how to trade on volatility.

4. Utilise risk-management tools. Particularly, stop-loss orders can effectively help in controlling your losses by closing you out of a trade amid unfavorable movement. However, in case it is triggered by short-term price movements, a stop-loss order will close you out a potentially profitable trade provided the price were to change again.

5. Analyse the markets and leverage social media. Keeping a check on Twitter, Reddit and Discord, in particular, are a good way to stay abreast with trending developments and stock news.

What risks do meme stocks bring to traders?

A company’s share price of typically reflects not only its intrinsic value but also gives a picture of overall financial status. Consequently, if the share price of a company surges overnight, it is an indication of a highly volatile market. This could result in a steep movement in the company’s share price in either direction. Therefore, it is advised to utilize prudent risk-management strategies while trading in these risk-prone types of environments.

Paul Nolte and Dan Niles are among the notable US investors predicting that the US meme stocks will crash following the announcements from the Federal Reserve in H2 of the current year. Both the investors believe that the Fed may decide to ease up on its monetary policies. This could result in less liquidity within the stock market and lower the opportunities present for short selling.

You must go through our comprehensive guide to risk-management to uncover methods on offsetting risk in volatile markets.

*Tax treatment depends on individual circumstances and can change or may differ in a jurisdiction other than the UK.