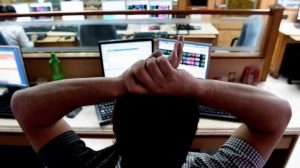 Analysts say gold, crypto-currencies and euro are likely to gain


The global equity market and the US dollar will likely fall while gold, cryptocurrencies and euro likely to gain today as tension escalates following North Korea’s successful nuclear test on Sunday.

Analysts are of the view that there would be a decline of one to two per cent in the Asian, European and regional markets as investors take a cushion and will also be gauging at how the US and its partners respond to the Korean provocations.

Kaseer Cotti Collan, head of Treasury at Lootah Holding, believes that there will be a small effect on the sudden news of Korean nuke test for a couple of days on the European, Asian and American markets.

Forecasting that euro would gain a bit while the gold will also open slightly higher on Monday, Cotticollan predicted that the US equities will drop between one to two per cent while European shares will decline less than one per cent. Similarly, he sees bullion gaining 2-3 per cent in a week time while euro will increase one per cent.

Akber Naqvi, head of asset management, Al Masah Capital, says the knee jerk reaction will be decidedly negative as this is an escalation of the North Korea issue that may provoke the rest of the global powers into a harsher response. The spike in uncertainty will push investors to the sidelines. Regional markets will be coming off a long break so volumes may remain subdued however they should follow the global trend.

Aditya Pugalia, an analyst at Emirates NBD Research, is of the view that it will not be a surprise to see flight to safety in light of these geopolitical developments. “We will get clarity after the countries that are affected like the US, Japan and Korea respond and then only we can take a call. But the general immediate call is flight to safety.”

On Sunday, North Korea announced that it detonated a hydrogen bomb that could be mounted on international ballistic missile. Last week, Korea tested a ballistic missile over Japan, rocking the global markets lower and lifting the European currency and yellow metal. As a result, the European currency hit 2015-high while the bullion also hit 9-month high.

President Donald Trump last month threatened to bring “fire and fury” to North Korea for its continuous threatening gestures towards the US.

“North Korea has conducted a major Nuclear Test. Their words and actions continue to be very hostile and dangerous to the United States,” Trump tweeted on Sunday.

The US markets are closed today for Labour Day and will reopen tomorrow.

Manoj Krishnan, managing director, at Leo Capital Advisors, points out that the market were expecting some restraint after dialogues between North Korea and the US in the wake of missile test but this surprise factor of nuclear test will have a negative impact on the market.

“We believe, the time period from now till markets opening in the morning tomorrow is too short for any meaningful dialogues to be exchanged. It becomes a natural deduction that markets will open negative. This will surely have an impact on the local markets as well,”Krishnan added.

He forecast one per cent erosion or more in most of the markets when they open today.

Tim Fox, chief economist Emirates NBD Research, stated that the Korean crisis will favour safe haven trades such as the Japanese yen and the Swiss franc in the first instance, but it may also help the US dollar against other major currencies although much will also depend on US President Donald Trump’s response.

Commenting on currency, Krishnan adds that the dollar will weaken. “Considering the present state of affairs, this would be positive for other cross currencies like the euro, sterling, Australian dollar etc.”

Krishnan is also bullish about the gold with a target of $1,550 in the coming months. “We also like global gold mining stocks which in our opinion is grossly undervalued.”

Bal Krishen, CEO of Century Financial, expects the North Korea threat to not fade away in the near future and suggests to invest in gold and other safe havens. The equity markets may take a small dip of 2-3 per cent but investors should be getting into safe haven like currencies and commodities rather than shorting equities.

“We believe that the dollar should weaken and cryptocurrencies like bitcoin could break major resistances and could go up by another 15-20 per cent. Gold, platinum, silver and palladium look to be in very big bull market and should be bought to ensure decent and safe returns,” he concluded.

Ole Hansen, head of commodity strategy at Saxo Bank, maintains end-of- year target at $1,325/oz for now but with the risk skewed to the upside. Upside targets are the post-US election and post-Brexit highs of $1,337 and $1,375/oz respectively.

Al Masah Capital’s Naqvi says bullion show more buying interest as uncertainty and volatility push investors into the standard safe haven and it should spike for the rest of the week as investors evaluate the repercussions of this global event escalating further.