Why are SPACs so popular? 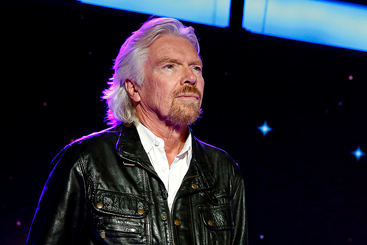 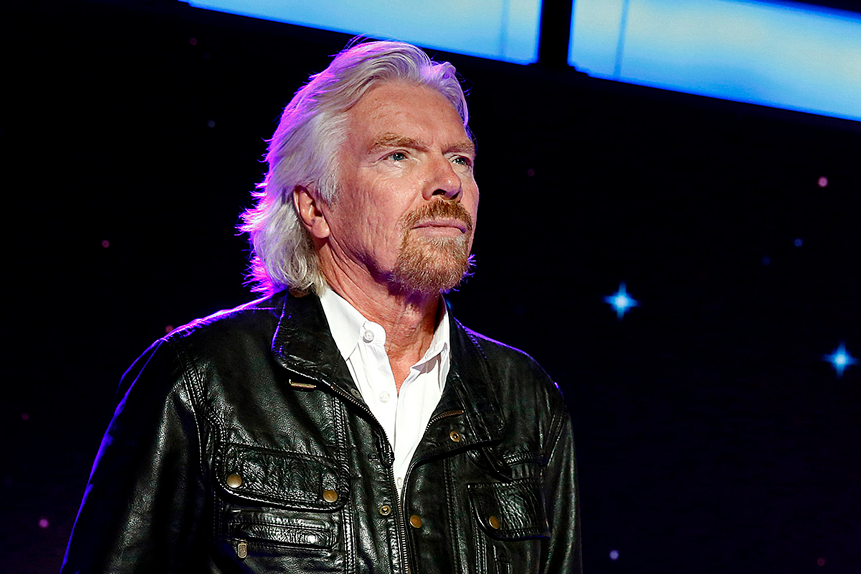 In this article, Frank Holmes, CEO of U.S. Global Investors and executive chairman of HIVE Blockchain Technologies, explores what a SPAC is and why they are so popular. He also provides an update on inflation in the US.

Wall Street thought 2020 was the year of the special purpose acquisition company (SPAC). Turns out, this title was premature.

We’re not quite three months into 2021, and yet US SPACs have already raised more money than the record $83.4bn that was raised in all of 2020.

So, what exactly are SPACs, and why have they become so popular all of a sudden?

Also known as blank cheque companies, SPACs are companies that have no explicit business plan other than to acquire or merge with an unspecified private company at some point. They’ve been around since the 1990s but haven’t drawn a whole lot of investor attention until recently, for reasons I’ll get into later.

The basics of SPACs

The way SPACs work is, they list on an exchange like the New York Stock Exchange (NYSE) and then typically have up to 24 months to acquire a target company. If a deal isn’t made by the two-year mark, they must dissolve and return the gross proceeds to shareholders.

One of the most well-known examples is Virgin Galactic [SPCE] (see Richard Branson, founder of Virgin Group, pictured) which began trading in October 2019 after merging with Social Capital Hedosophia, a SPAC founded by venture capitalist Chamath Palihapitiya.

Since SPACs don’t make anything or own any assets, it’s the founders that are the main draw. For example, Palihapitiya, an early Facebook executive, an outspoken advocate of Bitcoin and potential California gubernatorial candidate. Other SPAC sponsors have included big names such as Bill Ackman, Shaquille O’Neal and former speaker of the United States House of Representatives Paul Ryan. Investors may bank on founders having the right connections to close a deal with a hot tech start-up and bring it to market.

In other words, it’s a case of betting on the jockey (the founders) rather than the horse (the company).

Again, SPACs were once quirky backwaters in the $50trn US stock market. The NYSE didn’t bother listing any until May 2017. Just five years ago, Goldman Sachs [GS] had a strict policy against them.

Flash forward to today, and junior Goldman Sachs bankers are issuing complaints of gruelling working conditions due to the boom in SPAC issuances. A survey of first-year Goldman Sachs analysts showed that many have been working 100-hour weeks on average since January. “My body physically hurts all the time and mentally I’m in a really dark place,” one respondent wrote.

An alternative to traditional IPOs

When it comes to tapping public markets, the trend is definitely in SPACs’ favour. Last year, 248 SPACs listed, a record, compared to 209 traditional initial public offerings (IPOs). To my knowledge, this is the first time SPAC issuances outpaced IPO issuances. 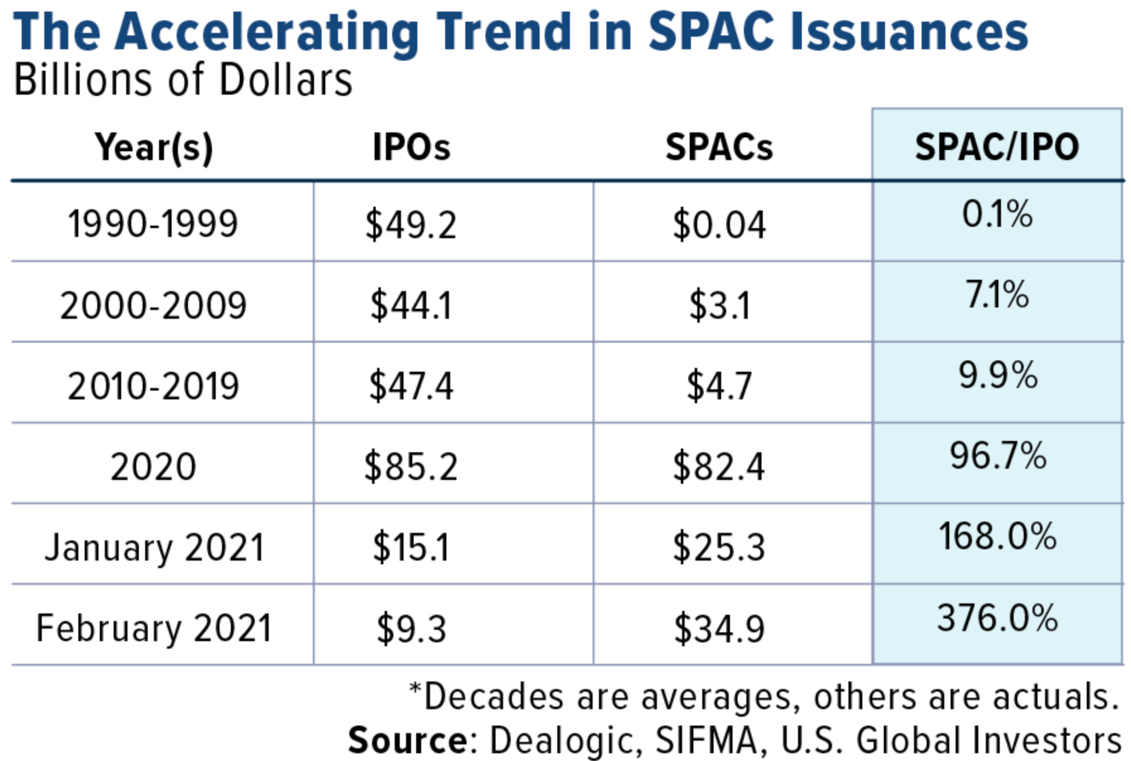 The amount of cash raised was also a nearly one-to-one ratio. The trend has only accelerated so far this year. Last month, for every $1 raised in an IPO, the SPAC market raised $3.76.

So, let me return to an earlier question: Why are these companies so popular all of a sudden?

The short answer is that, in a lot of ways, it’s easier for a company to go public through an acquisition or reverse merger than to jump through the regulatory hoops and get listed on an exchange. Traditional IPOs clearly have benefits, including greater visibility and prestige, but they can be costly and time intensive. An IPO can take up to two or three years to close, whereas a SPAC can be completed in as little as two to three months.

There are other upsides to SPACs, including requiring fewer disclosures. Deal points are limited to the SPAC founder(s) and chief executive of the target company; therefore, investor roadshows are effectively eliminated. This was an especially attractive feature in 2020 during the pandemic, which may have contributed to the SPAC boom.

I’ve written before about how the number of IPOs has been shrinking for years — both in the US and abroad — as the increase in regulations makes it tougher and more expensive to get (and stay) listed.

Companies are choosing to remain private for longer periods of time, often going public years after they’ve already become multibillion-dollar businesses with household name brands. Think Uber [UBER], Lyft [LYFT], Airbnb [ABNB] and DoorDash [DASH], all of which began trading in the past two years. This hurts retail investors, who never get to participate in a company’s meteoric rise from nothing.

For many investors and executives, SPACs can be seen as a “loophole” of sorts, allowing companies to get a public listing without going through the more typical channels. I don’t know if I would agree with that term, but I wouldn’t be surprised if regulators start to crack down on these types of transactions.

Inflation concerns at a record high?

Switching gears, I learned last week that Google searches for the keyword “inflation” hit their highest level this month since at least 2004, when the online search giant began collecting information.

This tells me that people are starting to get concerned with the direction consumer prices are headed in, and how this will affect their pocketbooks and investments.

The consumer price index (CPI) rose 1.7% year-over-year last month, but as I’ve said before, is the CPI “fake news”? This measure doesn’t include food and energy, and yet those are the goods and services seeing some of highest inflation right now.

Grocery prices increased the most in nearly a decade last year, and this rate could surge even more this year as shipping rates go up. In February, the cost to export from the US jumped 5.2% over last year, the most since June 2018, while import costs rose 3.0%. 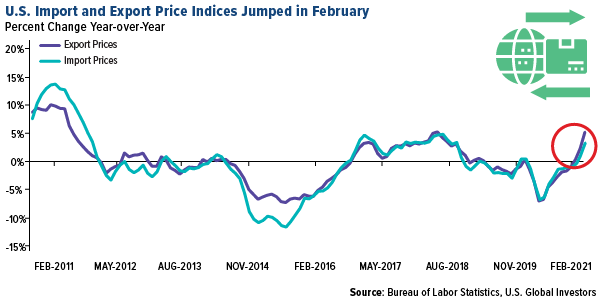 This, coupled with rising commodity prices, is having a huge effect on big-ticket items like cars and trucks. According to the Manheim Used Vehicle Value Index, wholesale prices for preowned automobiles increased a jaw-dropping 23.7% from March 2020 to today. Like I said recently, if you’re in the market for a new car, you might want to lock in today’s prices before they go up any more.

Last week, Jerome Powell, chairman of the US Federal Reserve, said he expects the US economy to grow 6.5%, which would be the most in almost 40 years. Even if this results in higher-than-normal inflation, Powell committed to continue high-growth monetary policies, including near-zero rates and asset purchases.

That said, I think gold is a prudent investment to help stem the impact of inflation on your portfolio. I often advocate the 10% Golden Rule, with 5% in gold bullion (bars, coins, jewellery) and 5% in gold mining stocks, mutual funds and ETFs.

This article was originally published on Frank Talk, a blog by Frank Holmes, CEO of U.S. Global Investors and executive chairman of HIVE Blockchain Technologies.