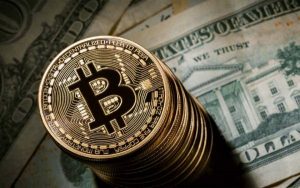 Bitcoin crashed on Tuesday to its lowest this year, falling as much as 10 percent to breach $4,300 and it is now down around 30 percent for the week. This is the first time the world’s largest cryptocurrency fell below $5,000 in more than a year.
At 10.30 AM Riyadh time, one Bitcoin was trading at $4,496.83 while the market cap of Bitcoin stood at $78,184,627,422, according to Coinmarketcap.com.
The plunge follows a sudden fall last week on Wednesday, when Bitcoin fell below the psychological $6,000 mark for the second time this year, and reached its lowest level in over a year. On Thursday, Bitcoin’s market capitalization fell below the $100 billion level — the lowest since October 2017.

This has to be seen in the context of ICO market raising almost $30 billion during the last two years with virtually nothing to show for it. As a matter of fact, he said, there are hardly 10,000 daily users of blockchain technology in spite of all the fund raisings.
The second major reason for the fall seems to be hard fork of Bitcoin Cash where it has spilt into Bitcoin Cash ABC and Bitcoin Cash SV, starting a battle between both the camps, Valecha added.
This has raised the level of uncertainty in the market, he said, adding Bitcoin has support at $4100.