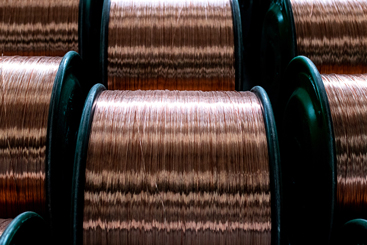 The price of copper breached the $10,000 per tonne mark at the start of May for the first time in 10 years and remains just above that level as of 11 June.

Concerns that the price of copper was due for a correction had weighed down the Global X Copper Miners ETF earlier in the year, when it fell to an intraday low of $33.90 on 25 March. However, the fund has largely recovered since then to hit an intraday high of $46.96 on 10 May.

Shares in Freeport-McMoRan have grown 57.3% in the past year (through 11 June). In April, the group — which has operations across the Americas and Indonesia — reported first-quarter net income of $718m compared with a net loss of $491m this time last year.

“We are well-positioned for… accelerating demand from copper’s critical role in building infrastructure and the transition to clean energy,” Richard Adkerson, chairman and CEO of the company, said in a statement.

Teck Resources’ share price has also surged 30.6% in the year so far, as of 11 June, off the back of positive earnings. The company posted a 247% first-quarter profit hike to $326m in April and a 76% profit rise from its copper mines in Canada and Chile.

However, copper mining companies have faced challenges, including COVID-19 mining disruptions in developing nations such as Chile. There is also a heavy reliance on demand from China, which accounts for over half of global copper consumption, according to Seeking Alpha.

Higher copper prices may also tempt buyers to switch to alternatives such as aluminium. Harrison Schwartz, a financial analyst, wrote in Seeking Alpha that he believes copper prices could decline in the short term. “Copper rose slightly too high in too short a timeframe largely due to a one-off supply issue which is now showing many signs of receding,” he wrote.

However, not all commodity analysts have such a bearish outlook. According to an article authored by Michael Gayed, founder of The Lead Lag Report, analysts at CNBC forecast that copper could hit $20,000 per tonne by 2025.

Indeed, copper demand is expected to continue to benefit from the growth in renewable products as well as from the opening of economies post-pandemic.

Jay Jacobs, head of research for Global X, recently told ETF Trends that copper can also protect investors against rising inflation. “It is a metal that has performed very well in inflationary environments for the past few decades”, he said.

Goldman Sachs is also a fan. It declared that “copper is the new oil” in a report in April, according to Investor’s Business Daily. It sees wind-related copper demand reaching 1.3 million tons a year by 2030, growing at a rate of 12.4% a year. As part of a supercycle for commodities, the firm forecasts that copper prices will likely reach $15,000 per ton by 2025.