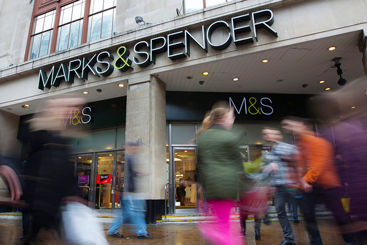 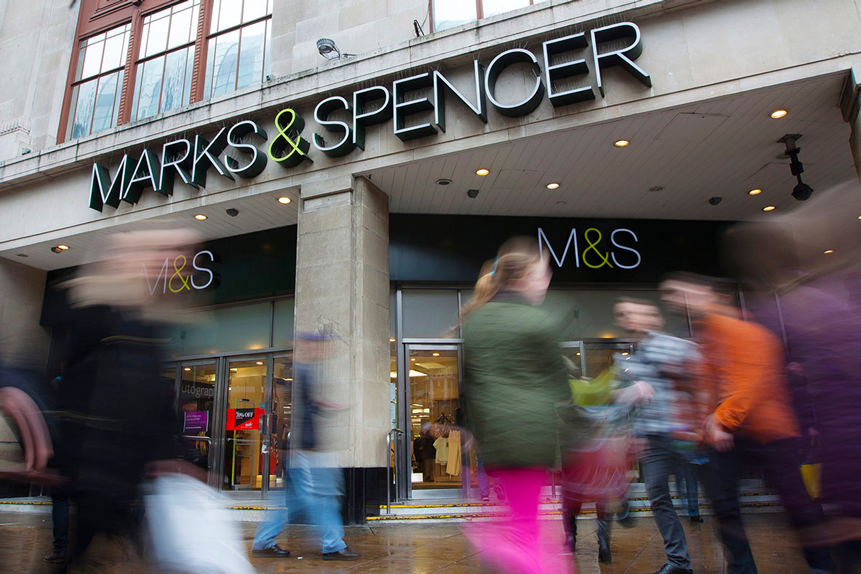 Marks and Spencer Group’s [MKS] share price hit an all-time low during the coronavirus pandemic. However, the stock’s intraday low of 73.90p on 16 March was nothing compared to the 52-week low of 1.03p that it reached on 23 September. As Marks & Spencer prepares to release half-year results on 4 November is there any magic and sparkle left for investors to enjoy in the lead up to the crucial festive retail period?

After starting the year at 215.10p, Marks & Spencer’s share price cratered during the market sell off, more than halving in value to 92.32p on 17 March as coronavirus fears panicked markets.

Marks & Spencer’s share price continued to falter over the next two months, sliding to a low of 85.04p on 15 May, as lockdown restrictions forced it to shut clothing stores. Next, shoppers turned to grocers with more established home delivery offerings. But, soon after restrictions started to ease in the UK, Marks & Spencer’s share price recovered to 120.50p on 9 June.

Despite the group’s online expansion efforts, which included the launch of an online food shopping joint venture with Ocado [OCDO] in September, Marks & Spencer’s share price is down 59.9% year-to-date at 89.14p as of 30 October. 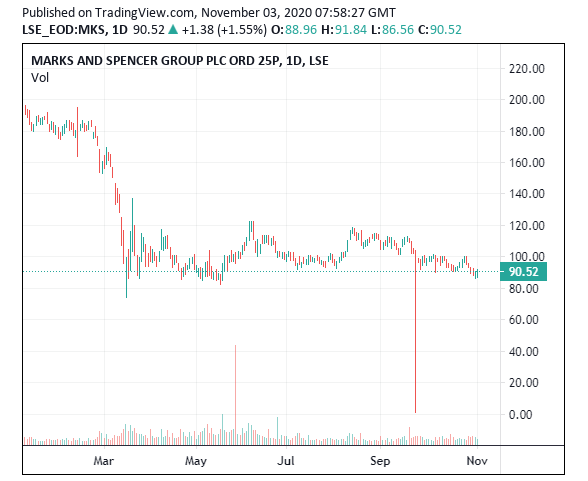 The group’s full-year results, released on 20 May, revealed that revenues had fallen 1.9% to £10.1bn alongside profits, which were down 20.2% at £67.2m. Marks & Spencer said food like-for-like sales strengthened throughout the year, jumping 1.9% and a further 0.3% boosted by the coronavirus pandemic.

In the 52 weeks ended 28 March, clothing and home sales — in tatters in recent years as designs consistently failed to impress shoppers — fell 8.3% year-over-year.

In a trading update on 18 August, Marks & Spencer said food sales had grown 2.5% in the last 13 weeks as shoppers returned to the high streets. Meanwhile, its clothing and home revenues dropped 38.5%. The group did note of some improvement in sales amid a rising number of online clothing customers. However, posted a 29.9% sales slide in the last eight weeks.”

As a result of the performance, Marks & Spencer revealed it would cut 7,000 jobs and close over 100 stores as part of its “Never the Same Again” turnaround strategy aimed at making it more streamlined and digitally focussed.

Looking to its upcoming half-year results, analysts expect it to post its first-ever loss as a public company of £59m, according to Retail Gazette. That compares with a £176.5m profit in the same period last year. Food sales are forecast to grow 0.3% with Ocado Retail likely to have performed well. However, demand in its clothing and home division is set to plunge by 41%.

The downbeat guidance for its clothing and home division stems from gross margin pressure as a result of discounts, Sophie Lund-Yates, equity analyst at Hargreaves Lansdown, said. She expects the closure of stores and its “full price” season will have made its performance worse in this area.

“The beat on trading in August has been driven by food, while clothing and home has really struggled. This dynamic was true before the pandemic, but a lacklustre online presence means this fault line has been exacerbated,” Lund-Yates said.

A consensus of 23 analysts have an outperform rating on the stock and an average target price of 129.95p, according to Market Screener. This would suggest a 45% uptick on Marks & Spencer’s share price as of close on 30 October.

“The stock is trading at a price-to-book value of 0.5. That implies the group’s assets are worth 100% more than its current market value. It would appear that the group’s current share price already reflects most of the bad news facing the business,” Hargreaves wrote in the Motley Fool.

The caveat to this, however, was that is the recent decision by the UK government to enforce a second lockdown until early December. A quiet high street will likely hurt sales, but given Marks & Spencer’s improving online clothing offering and the Ocado service, the impact might be less severe.