How Amazon, Ocado and other stocks’ share prices could rise against the tide

During the current market downturn, investors and traders are searching for stocks such as Amazon and Peloton, the share prices of which are continuing to see outperformance and defying volatility in the wider markets.

Throughout March many companies struggled amid increasing COVID-19 control measures — which has caused businesses to shutter and supply chains to falter — not to mention the crashing end to a record 11-year bull run. However, there are some that have seen their share prices rising, despite the onslaught.

For those self-isolating or stuck at home, turning to the e-commerce platform to goods online, as well as increasing demand for the grocery section, Amazon Fresh, – for those not wanting to risk a trip to the local supermarket -, have provided a boost to the business.

Meanwhile, its entertainment section, Amazon Prime, is also likely to benefit from increased traffic. Those watching the share price share this positive sentiment.

“As more and more businesses shutter or move to online operations, and more and more consumers shelter in their homes, we expect traffic on the Amazon site to increase,” Argus analyst Jim Kelleher wrote in a report last week, CNBC notes.

Stock technical analysis also looks favourable for Amazon. The short-term trend for the stock is bullish while the price trades above the 1,860 support level, according to Capital.com.

According to the publication, a head and shoulders pattern has formed, particularly prevalent for traders using the 30-minute timeframe, which indicates a potential 300-point upside. The report went further to suggest a breakout around 1,995 could prompt a rally “towards the 2,300 level” smashing Amazon’s 2,185 all-time high.

According to Evercore ISI analyst Lee Horowitz, downloads for the Peloton app in March were up five times relative to the company’s February run rate. He said the firm was “seeing Peloton subscriber growth and engagement clearly benefiting from global quarantines” and has suggested that restricted exercise options for existing customers could mean fewer subscription cancellations.

Furthermore, these effects could be longer-lasting. “If you go as far to buy the bike, you’re not somebody who’s planning on going back to traditional fitness patterns, once you’re bought in you’re bought in,” James Hardiman, analysts at Wedbush, told CNBC. 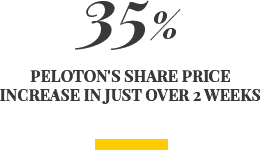 Another e-commerce platform to be benefiting from shifting consumer trends, Ocado’s share price saw a stratospheric rise, surging 37% over the course of five days before falling around 18% throughout the rest of the month to 1,244.5p.

Ocado initially benefitted from a surge from consumers reluctant to venture out to brick and mortar supermarkets during the lockdown period both for health reasons and to avoid queues.

The hope is that new customers, such as those that have previously not considered online shopping as a viable option, will continue to use Ocado after the pandemic ends. However, some are still wary of this assumption.

It has been notable that online delivery firms, not just Ocado, have struggled under the huge demand in the last few weeks with long waits before customers can place orders.

“It seems entirely possible that, post-COVID-19 resolution, momentum will switch within the industry from developing delivery capability to collection,” analysts at Jeffries said, told the Financial Times. “Ultimately, as players in various markets think about how this crisis is stress-testing the different online models, they may find Ocado a less attractive solution.”

The remote conferencing service has seen its share price climb 39% in March to $146.12, as employees forced to work from home organise online meetings using its technology.

First-time installations of Zoom’s mobile app were up 213% last week compared to the week that began 9 March and have soared 728% compared to the week commencing 2 March, according to Sensor Tower. “Zoom’s mobile app was installed about 3.7 times more than Skype’s and 8.6 times more than Google Hangouts,” said Randy Nelson, Sensor Tower’s head of mobile insights.

Despite impressive statistics and potential, some flags have been raised over the security of the company. Earlier this week, a letter seen by the New York Times indicated that the New York Attorney would be looking into the company’s privacy practices.