How will Twist Bioscience’s new deal affect its share price? 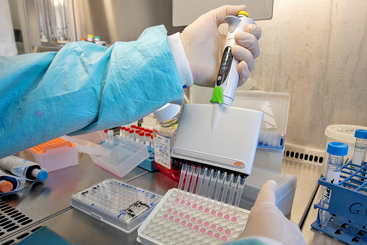 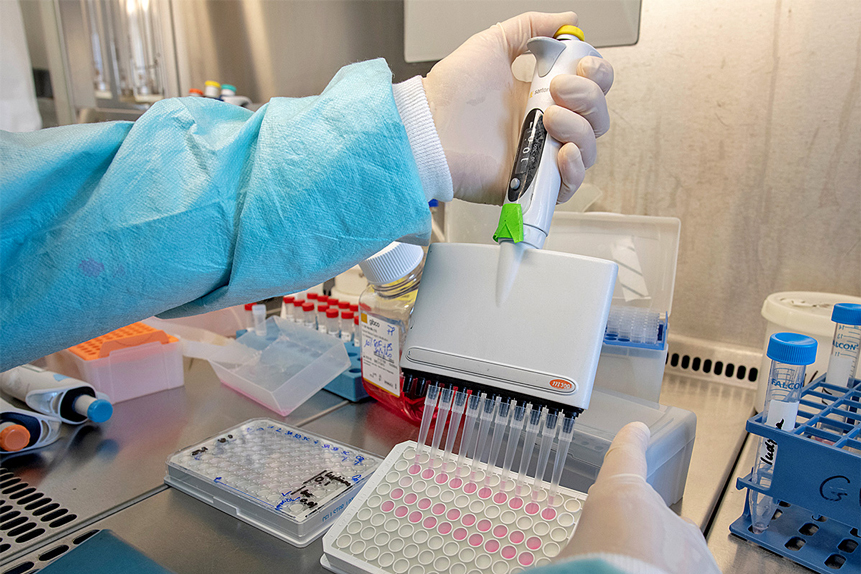 A recovery over the following week saw the cutting-edge synthetic biology company’s share price rally 39.5% to close 15 March at $144.47, 2.3% above where it ended last year.

The most unstable period for Twist Bioscience’s share price was at the end of January and into early February. In the six sessions between 27 January and 4 February, it gained 23.5%, before falling 20.1% in a single day to close 5 February at $158.02.

On 2 March, Twist Bioscience announced a partnership with enzyme manufacturer Watchmaker Genomics, and its share price fell by 2.2%. It lost a further 25.6% over the next four trading days before rallying on 9 March. 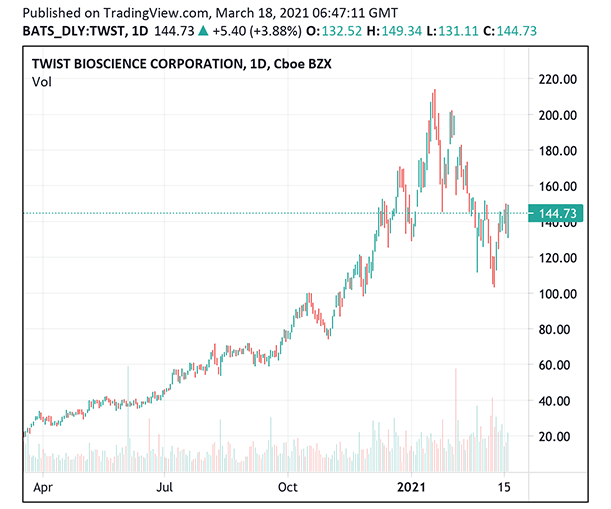 Opening the door for genome editing

The partnership is a significant development for genome editing.

“Watchmaker has developed an expertise in enzymes that is very important in sample preparation for next-generation sequencing. Twist is the leader in DNA synthesis, and pairing their enzymatic piece with our target enrichment in advance of sequencing makes a very powerful combination,” Angela Bitting, senior vice president, Corporate Affairs at Twist Bioscience, told Opto.

While the company currently produces a wide range of COVID-19-fighting antibodies, as well as products used in the testing and diagnosis of the virus, the Watchmaker Genomics partnership appears to be focused more on battling forms of cancer, at least in the near term.

The partnership’s press release makes reference to “oncology and tumour profiling”, “liquid biopsy assays”, and studies into cfDNA and ctDNA (both of which are associated with cancer).

“Moving forward, we believe there are many synergies in combining best-in-class enzyme engineering with best-in-class DNA synthesis,” Bitting noted.

“There are exciting advances in cancer that we believe will benefit from the partnership, but it is not exclusive to cancer. We believe that [Watchmaker’s] core enzyme capability and workflow experience will support further development of our products, potentially the SARS-CoV-2 products as well.”

ETFs in the genes

Twist Bioscience is its fifth-largest holding in the Ark Genomic Revolution ETF [ARKG], with a weighting of 4.5% (as of 15 March).

The performance of the fund, which tracks businesses involved in genomics, has been similar to that of Twist Bioscience’s for the year to date. A slump in late January preceded a recovery in the first half of February, only to hit freefall in late February and March. Between 12 February and 8 March, the fund lost 27% of its value. The Ark Genomic Revolution ETF’s largest holding, Teladoc Health [TDOC], fell 39.6% between 19 February and 8 March.

Other ETFs active in the pharmaceuticals space include the SPDR S&P Biotech ETF [XBI] and the iShares U.S. Medical Devices ETF [IHI]. In fact, the industry as a whole has seen a surge in ETF investments lately, with the Financial Times reporting that 13 of the 50 stocks whose free-float ownership was mostly comprised of ETFs are pharmaceutical firms. Ark Invest, with its portfolio of funds focusing on disruptive technology, appears to be a major driver behind this trend.

On the whole, analysts following Twist Bioscience are reasonably confident about the firm’s prospects, according to CNN Money. A median price target of $157.50 among the four analysts offering 12-month forecasts implies 9% growth from the closing price on 15 March, with a high target of $200 suggesting a 38.4% increase. However, pessimism surrounding the firm increased in February following a disappointing set of quarterly results. JPMorgan downgraded the stock from neutral to underweight.

“We are hard-pressed to handicap the 61.6x calendar 2022 sales valuation,” Tycho Peterson, analyst at JPMorgan, told Bloomberg. He observed that rival synthetic biology firms Guardant Health [GH] and 10x Genomics [TXG] were trading at half the price of Twist Bioscience shares.