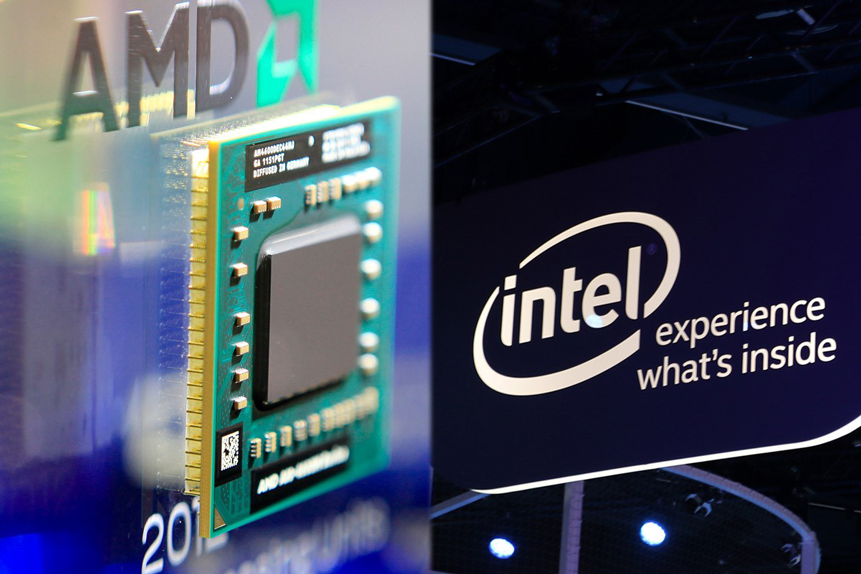 The rivalry between the two chipmakers is now decades old, with both businesses being founded in the 1960s. Intel is by far the larger business, but following the release of its third-generation Ryzen processor last year, AMD has started to put on increased pressure. Tests have shown that the Ryzen outperformed a similar processor from Intel, while also being half the price. 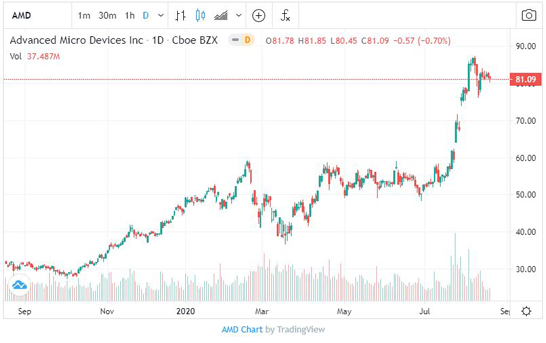 A tale of two chipmakers

AMD has already started shipping its 7nm Ryzen desktop chips, whereas Intel announced during its second-quarter earnings call that manufacturing of its own 7nm chips would be delayed by as much as a year due to a design fault.

Intel is now expected to ship the products at the end of 2022, or early 2023. Following the earnings call on 23 July, when the announcement was made, Intel’s share price dropped 17% in intra-day trading on 24 July. 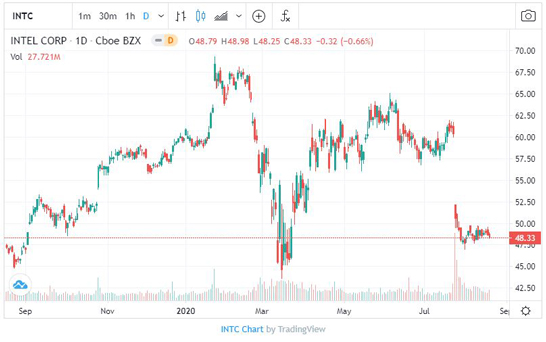 The ball has now landed firmly in AMD’s court, and analysts believe that Intel’s 7nm chip woes will be AMD’s gain.

“From here we see things growing increasingly painful as 7nm delays are likely to overshadow anything good they [Intel] can put forth, while magnifying any negative events,” wrote Stacy Rasgon, Bernstein analyst, in a note to clients, as reported by MarketWatch. He downgraded his rating from Perform to Underperform and set a target of $45 for Intel’s share price. This would represent a 7.5% downside on 18 August’s closing price.

However, that wasn't the only downgrade for the chipmaker. According to MarketBeat, the company now has 15 Buy ratings, 17 Holds and 10 Sells. A month ago, it was 20 Buys, 15 Holds and six Sells.

Rasgon added that AMD “appears ascendant, while their larger competitor flounders”. He raised his target for AMD from $45 to $70 and has assigned the stock a Perform rating.

AMD has been the recipient of a slew of upgrades since it reported its second-quarter earnings on 28 July. Vivek Arya, an analyst at Bank of America Securities, assigned the stock a Buy rating and upgraded his price target from $65 to $77.

According to Benzinga, Arya has argued that AMD is in a great position to take advantage of Intel’s misfortunes. Meanwhile, in a note to clients, Hans Mosesmann, Rosenblatt Securities analyst, said that it wouldn’t come as a surprise to him if the chipmaker increased its market share to levels not seen since 2006. AMD’s chips are in circa 19.2% of new personal computers, according to Mercury Research, up from 7.3% in 2015.

Could Intel still come out on top?

Faced with the possibility of losing further ground to AMD, analysts seem to be in agreement that Intel has to ask itself how it’s going to improve manufacturing processes in order to remain competitive. One way is for the company to pivot and begin outsourcing manufacturing, using third-party foundries to accelerate the production and shipping of its 7nm chips. Historically, Intel has done most of its own manufacturing.

Although Intel recently lost its crown as the biggest chipmaker in the US by market cap to Nvidia [NVDA], there could be plenty of twists and turns to come.

The upcoming eleventh generation of Tiger Lake processors — rumoured to be released on 2 September — is expected to help Intel take back the performance crown from AMD’s Ryzen processors. This could give Intel’s stock price a much-needed boost in the quarters ahead.

Looking to the longer-term Jefferies analyst Mark Lipacis seems to think AMD will be the winner. In a bullish move, he raised his target for AMD’s share price from $95 to $135.

Lipacis wrote in a note to clients: “We think that the bull case for AMD, which is largely based on AMD capturing 30% share from [Intel] over the next two to three years, will morph into a 50% market share bull case four-to-five years out.”