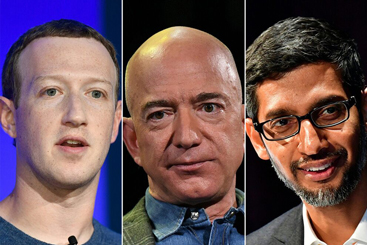 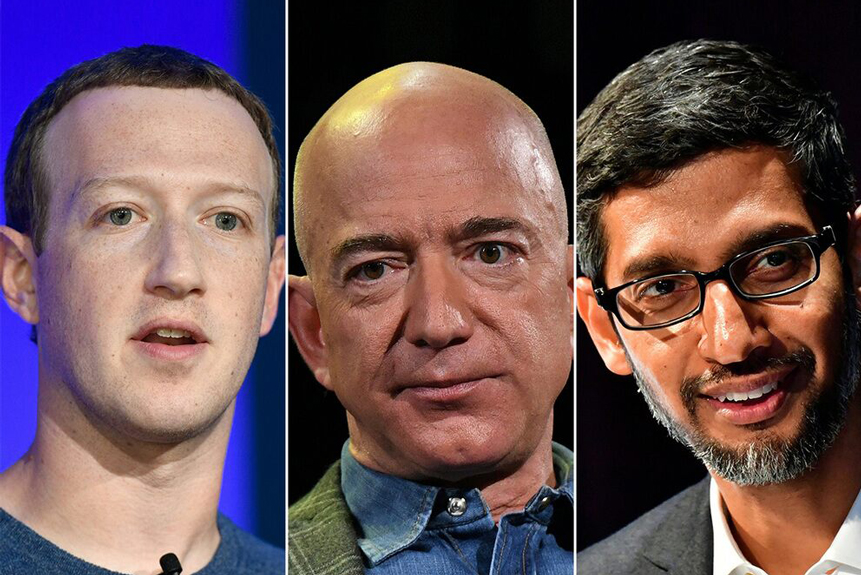 Big tech looked unstoppable. Amazon’s share price was up 76.85% thanks to the lockdown limiting shopping options and the strength of its AWS cloud computing business, while Alphabet’s share price closed up 29.61%. Facebook’s share price closed 2020 up 30.91%, despite continued negative publicity concerning content moderation on its platforms.

Yet, since late last year, the gains have cooled and JPMorgan has picked up on investor frustration following big tech’s sterling 2020 performance.

"In the early days of 2021, our conversations with investors suggest real FANG fatigue and frustration, including tepid ownership and uncertainty as to what turns things around," JPMorgan said in a note published last week.

The stocks are facing headwinds including cyclical rotation, regulatory pressure and political tensions. JPMorgan seems to suggest that investors should ride out the turbulence, but increased regulatory oversight could see these stocks come unstuck in 2021.

Why is big tech vulnerable to regulation?

Regulatory pressure may well create some volatility in the big tech theme this year, with Facebook, Alphabet and Amazon’s share prices all vulnerable to antitrust measures. To make matters worse, the threat is not limited to a specific region, as governments and watchdogs around the world take an increased interest in big tech.

In Europe, the EU is moving forward with plans to introduce regulation that will clarify the responsibilities internet companies have for the content they publish, while also putting restraints on platforms that own the marketplace in which they compete.

Over in the US, government bodies brought five separate antitrust lawsuits against Google and Facebook last year. According to Bloomberg, Amazon is also being investigated for antitrust practices on its third-party marketplace. Such scrutiny and potential legal action is only likely to increase now Democrats control the White House.

Yet, for big tech, it is Biden’s promise to double tax on profits made from intangible assets held overseas that could have the biggest impact. This would affect all of the big tech companies’ bottom lines, as well as their respective share prices.

Despite the shadow that regulation is casting over big tech, JPMorgan says the FANG stocks remain attractive, suggesting the big tech theme will remain buoyant in 2021.

"We believe all FANG names have normalized top line growth of 20%-plus, and Google and Facebook should accelerate in 2021 on a strong online ad market," the firm says.

Upcoming fourth quarter results also look promising for Facebook. Wall Street is expecting earnings of $3.19 a share, up from the $2.56 seen in the same period last year. Revenue is pegged at $26.34bn, a hefty 25% increase on the previous year. 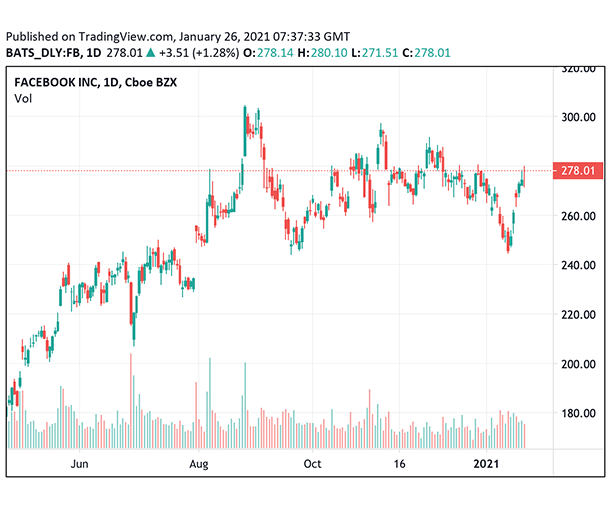 JPMorgan also expects Alphabet’s share price to benefit from increased advertising revenue this year, including a recovery in YouTube revenue. The bank forecasts a 22% operating income margin for the search giant, up 95 basis points, and has pinned a $2050 price target on the stock — an 8.32% upside on its price at 22 January’s close. That optimism isn’t necessarily shared with other analysts, with Alphabet’s share price carrying a $1,901.67 average price target on Yahoo Finance. 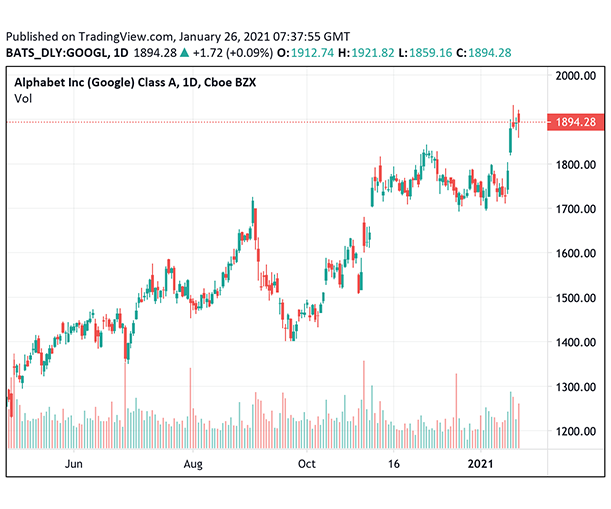 Amazon’s share price weathered the coronavirus pandemic well, as people avoided physical shops. The ecommerce giant’s third quarter earnings easily topping analyst expectations. For the fourth quarter, Amazon expects earnings to come in between $112bn and $121bn, which would represent between 28% and 38% growth year on year.

JPMorgan has a $4100 price target on Amazon’s share price. This would see a 24.54% upside on 22 January’s close, and is significantly higher than the already-toppy $3,830.84 average from analysts tracking the stock on Yahoo Finance. 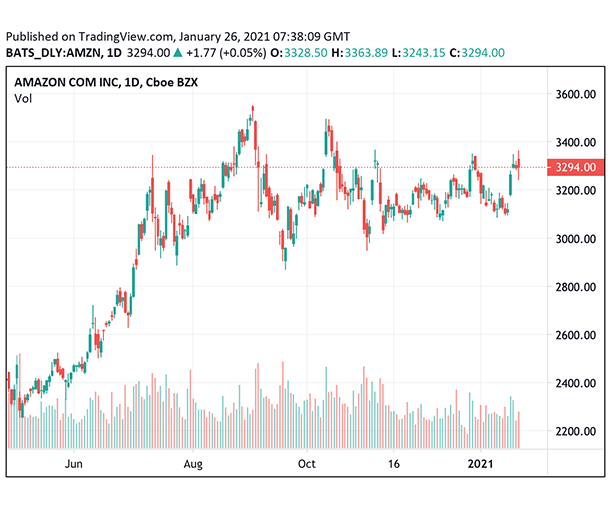 JPMorgan’s optimism for Facebook, Alphabet and Amazon’s share prices suggests that these companies are likely to see a strong 2021. The issue of how they are regulated is important, and should be kept in mind when making an investment decision. However, growth and earning potential could make these companies worth backing in 2021, despite regulation likely to dominate how they are reported in the press.

For an overview of the big tech trend’s success, and to keep track of its future moves, take a look at Opto’s new thematic ETF screener.