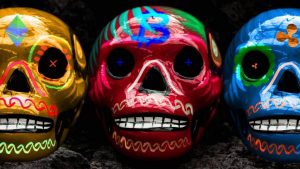 Are we witnessing the slow death of cryptocurrencies?

With Bitcoin making a recovery, investors can either dive in or shun this volatile asset class altogether

Bitcoin is back. The world’s biggest and best-known cryptocurrency is recovering from its recent crash, which saw it lose two thirds of its value from its $20,000 peak in mid-December.

On April 6, bitcoin slumped to just $6,620, with rival alt-coins such as bitcoin cash, ethereum, litecoin, ripple by XRP and dogecoin also plunging back to earth after hitting dizzying heights in 2017.

Traders who hopped on board late got badly burnt, with many exiting from the sector altogether, nursing their wounds.

Those who sold at the lower price may be kicking themselves today, because Bitcoin has bounced back. At the time of writing it was trading at $9,350, with the psychologically important $10,000 target in its sights. Other alt-coins are posting similar gains.

Could they still “fly to the moon”, to use the jargon favoured by cryptocurrency investors, and make you rich? Or should you do the sensible thing and shun this terrifyingly volatile asset class?

Bitcoin is arguably the most lucrative investment in history, surging 18,000 per cent last year alone.

However, it has attracted as many haters as fanboys, including Dr Doom himself, Nouriel Roubini, the Nobel prize-winning economist who predicted the financial crisis. In February, he slammed Bitcoin as the biggest bubble in history, one favoured by “charlatans and swindlers”, whose value was destined to crash to zero.

He was not alone in predicting meltdown, as governments and central bankers turned the screw on the unregulated cryptocurrency that only exists on computers and has no central bank behind it.

So there was widespread surprise when Bitcoin skyrocketed by $1,000 in just 60 minutes on April 12, especially since nobody could really say why.

Fawad Razaqzada, technical analyst at Forex.com, says other digital coins also fought back strongly, including ethereum, bitcoin cash, litecoin, ripple and neo. “There was no obvious trigger for the rally, but the selling did look overdone and a bounce back was long overdue.”

This was also a case of pent-up demand. “Those who missed out on last year’s rally saw the pullback as an opportunity to buy at relatively cheaper levels,” says Mr Razaqzada.

Some investors now view cryptocurrencies as a form of digital gold and rushed to buy portfolio protection as tensions rose between the US and Russia over Syria, and fears grew that President Donald Trump would unleash a trade war with China, he adds.

However, Mr Razaqzada warns the recent recovery does not guarantee further gains, as short-term climbs in a bear market are not uncommon. “Not everyone believes in the crypto hype and some have seen an opportunity to short it. Still, we may see a sizeable bounce before selling resumes.” 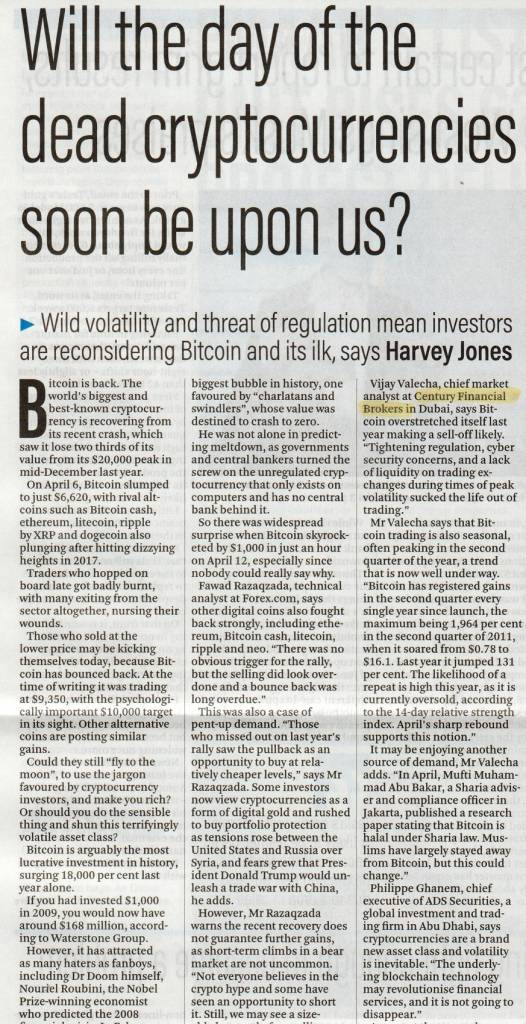 Mr Valecha says that Bitcoin trading is also seasonal, often peaking in the second quarter of the year, a trend that is now well underway. “Bitcoin has registered gains in the second quarter every single year since launch, the maximum being 1,964 per cent in the second quarter of 2011, when it soared from $0.78 to $16.1. Last year it jumped 131 per cent. The likelihood of a repeat is high this year, as it is currently oversold, according to the 14-day relative strength index. April’s sharp rebound supports this notion.”

It may be enjoying another source of demand, Mr Valecha adds. “In April, Mufti Muhammad Abu Bakar, a Sharia adviser and compliance officer in Jakarta, published a research paper stating that Bitcoin is halal under Sharia law. Muslims have largely stayed away from Bitcoin, but this could change.”

Philippe Ghanem, chief executive of ADS Securities, the Abu Dhabi based global investment and trading firm, says cryptocurrencies are a brand new asset class and volatility is inevitable. “The underlying blockchain technology may revolutionise financial services, and it is not going to disappear.”

Any asset that surged as rapidly as Bitcoin is always likely to correct, adds Mr Ghanem. “Our view is that digital coins and tokens are here to stay, but with potentially large swings up and down in the short term.”

Mr Ghanem says cryptos will establish themselves, with new exchanges and safer wallets, and greater retail and commercial uses. “Today, cryptos are traded like stocks and shares. In future, they will be traded in the same way as the pound or dollar, giving them greater functionality and stability.”

Investors should nonetheless think twice about rushing back into the market. “You need to look at your overall portfolio to make sure it meets your needs. Coins and tokens can provide significant returns but you also have to consider the potential losses.”

Dubai-based blockchain communication consultant Mohanned Halawani, who helped promote the event, said the global crackdown on crypto trading by the world’s most powerful governments and central bankers spread “fear, uncertainty and doubt”, or what traders like to call FUD. “Rest assured, the blockchain and crypto-currency story is far from over.”

Losses from the recent crash were massive, an estimated $600 billion in just three months, he says. “Existing investors cashed out, newbies lost confidence, and the market slowed. However, I believe that those who turned their back to crypto may just have committed the biggest investment mistake of their lives.”

More than 2,000 start-ups are now using blockchain technology, many partnering with global corporations, while governments are getting involved, Mr Halawani says. “France is planning a new regulatory framework to attract financial start-ups that use cryptocurrencies to raise funds. Last year, Dubai announced emCash, an encrypted blockchain-powered digital currency allowing citizens to pay for government and non-government services. G20 countries have agreed to engage with blockchain technologies to build an exclusive, transparent and accountable digital economy for all.”

Mr Halawani says government caution is understandable. “They do not want cryptos to shoot to the moon as they want to deter money laundering and criminal activity, and because what goes up quickly can also can crash just as fast.”

Iqbal V Gandhi, UK managing director of eToro, a popular platform among crypto traders, says the interest is still there despite a “wobbly” start to the year. “As cryptocurrencies become a more accepted asset class and larger institutional investors move in, investors are shifting from day trading to a buy and hold strategy.”

This is creating a steadier market, steadily pushing Bitcoin above $9,000, easing bearish sentiment and attracting investors back to the market, he adds.

Whether you invest depends on your personal tolerance for risk. “This is still a volatile asset class, although you can mitigate the risk by diversifying your portfolio and holding a broad spread of crypto-currencies.”

Mr Gandhi says the industry will grow in respectability as it edges closer to the mainstream, while a regulatory framework should lend it further legitimacy and longevity. “I am chair of self-regulatory trade body CryptoUK, which is working with government, regulators and wider opinion formers to map out what that framework could look like.”

The doubters continue to outnumber the believers. Steen Jakobsen, chief economist and chief investment officer at Saxo Bank, believes there will only be one winner out of the thousands of competing currencies. “It will be stronger, better and less energy consuming. The problem is that nobody can say which currency that will be.”

Mr Jakobsen says the winner will most likely be a cryptocurrency not yet born, one that is fully compliant and no longer anonymous. “No crypto will be able to operate parallel to the existing money system without fulfilling these two key conditions. The most likely scenario is a global currency led by the IMF and World Bank, but that is at least 10 years down the line.”

In the interim, he anticipates a further crackdown and believes the rush into Bitcoin is over. “Governments could take measures to stop the independent issuance of money and will be less likely to allow anonymous transactions. Investors must be cautious, the fear of missing out is the worst reason for buying anything.”

John Viney, chief operating officer at AES Investments in Dubai, is also sceptical. “Evidence demonstrates that the ‘next best thing’ never beats stocks, bonds, property and cash over the longer term. Cryptocurrencies will follow this trend.”

Trading in assets such as Bitcoin is not for the fainthearted. Dreams of riches can quickly dissolve, as prices have a habit of doing exactly the opposite of what you want them to do: those who bought at the recent top or sold at the bottom will be kicking themselves equally hard. That is the nature of trading.

Cryptocurrency trading and investing is a psychological game, as much as a financial one. Crashing and soaring prices can also play havoc with your emotions. The days when Bitcoin could make you a millionaire are almost certainly over, but you could still lose an awful lot of money.