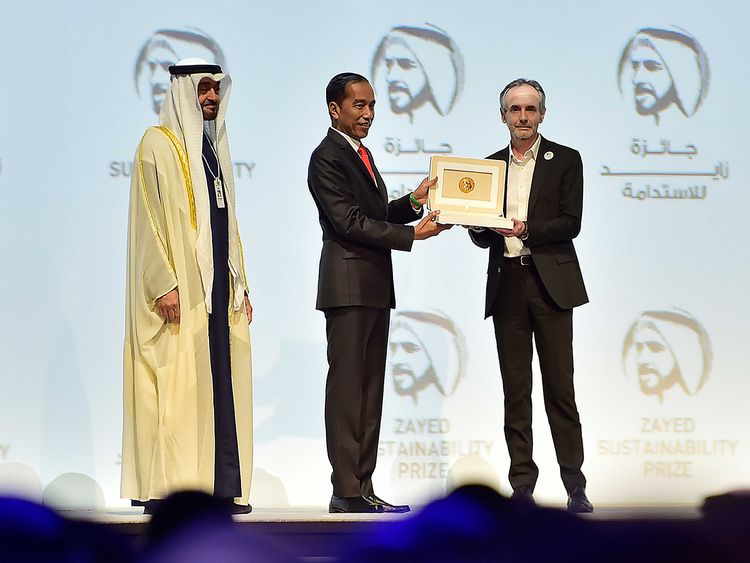 Amid the green rice fields of Central Java’s northern coast sits Batang Integrated Industrial Estate. The special economic zone is one of several set to bring billions of dollars in investment into Indonesia, according to President Joko “Jokowi” Widodo. Touring the 4,368-hectare facility in June, he announced an influx of $850 million (Dh3.11 billion) as seven foreign companies, including LG and Panasonic, confirmed plans to relocate production facilities to the Asian archipelago — many to Batang. About 30,000 new jobs come with the investment, according to the country’s Investment Coordinating Board (BKPM).

Although the Batang park will take up to two years to develop, Widodo said at the event that another 17 multinationals are “close to 100 per cent commitment”. These companies are expected to bring another 12,000 jobs and total foreign investment of $37.8 billion to Batang and another 26 new industrial parks, BKPM data shows. The new business is being attributed to a special task force targeted at businesses looking to diversify their supply chains in the wake of recent events such as the coronavirus pandemic and the trade war between China and the US. American lighting products maker Alpan is reportedly relocating out of Xiamen, China, to Kendal, also in Central Java, because of a new 25 per cent import tariff on products from China, The Jakarta Post reported. On the other hand, LG wants to build a regional hub in Indonesia to serve its Australasian markets — half of all trading activity in Asia now takes place within the region, according to estimates from management consultant McKinsey.

Widodo promised to roll out the red carpet for investors with cheaper land prices and quicker processing times. “If there is any difficulty with permit processing, I’ve ordered the BKPM head to take care of it, from A to Z, so investors can feel catered to,” he was quoted as saying. “If other countries are asking 1 million for land, then we can offer it for 500,000,” the Nikkei Asian Review quoted him as saying on the tour. Likewise, if other countries offer business permits within a week, he said Indonesia should be able to grant these within a day or two. FDI currently comprises 30 per cent of Indonesia’s Gross Domestic Product (GDP), second only to household expenditure.

The country presently ranks 73rd on the World Bank’s ease of doing business index; Widodo wants to improve this to 40 by the end of this year — something he reiterated as part of a national address ahead of the country’s 75th anniversary of independence on August 17. In April, the government accelerated planned corporate tax reforms to help companies impacted by the effects of the coronavirus. It cut the corporate income tax rate to 22 per cent from 25 per cent for this year and further to 20 per cent in 2022, a year earlier than previously planned.

Meanwhile, BKPM data shows that realised investment created 263,109 jobs in the April-June period, up by 3 per cent from the same period last year.

Like every other country, however, Indonesia must first battle the effects of the pandemic. The nation reported its first economic contraction in more than two decades this month. Second-quarter GDP shrank by 5.32 per cent from a year ago, but the government expects a significant rebound in the third quarter. Finance minister Sri Mulyani Indrawati expects the economy to grow at 0.5 per cent in the third quarter and has revised GDP forecasts for the year to a range of 1.1 per cent contraction to 0.2 per cent growth.

Nevertheless, Indonesia balances a favourable medium-term growth outlook and a low government debt/GDP ratio against a high dependence on external financing and low government revenue, credit ratings agency Fitch Ratings said earlier this month. “Fitch forecasts a rebound to 6.6 per cent growth in 2021, partly driven by a low-base effect, and expects growth momentum to continue at 5.5 per cent in 2022, supported in part by the government’s renewed focus on infrastructure development,” it said in a statement. By contrast, pre-pandemic GDP growth was 5 per cent in 2019.

The figures are in line with government estimates: Widodo’s 2021 budget assumes GDP growth of 4.5 per cent to 5.5 per cent next year.

Investors, therefore, should take the long-term view, says Vijay Valecha, Chief Investment Officer, Century Financial, a Dubai-based investment and research advisor. “Having doubled its GDP over the past decade, Indonesia is now a trillion-dollar economy. Despite challenges related to Covid-19, it is fair to expect that Indonesia will again double its GDP in the coming decade since it is growing from a low base,” he told GN Focus. “The black swan event of Covid 19 has made companies realise the necessity of having a diversified supply chain. Indonesia is expected to be a primary beneficiary of this trend, which is expected to accelerate in the coming decade.”

By most accounts, Indonesia is set to become one of the world’s top 10 major economies by the end of this decade, vaulting into fifth place with a GDP of $5.4 trillion (by purchasing power parity, PPP) by 2030, according to the PWC’s The World in 2050 report. By 2050, the consulting firm predicts that demographics and productivity will propel the country to become the world’s fourth-largest economy by 2050.

Although the figures date from before the coronavirus pandemic, they chime with broader market realities. “As China’s population ages and real labour costs increase, we are likely to see global multinationals shift some of their off-shoring jobs from China to other relatively cheaper economies, such as Vietnam, Bangladesh and Indonesia,” the PWC report says.

In other words, the coronavirus and the tariff wars between the US and China may well have simply accelerated an inevitable supply chain shift towards markets such as Indonesia. Widodo’s 27 business parks may not be enough for Indonesia.

The relocation of Indonesia’s new capital city from Jakarta to East Kalimantan province on Borneo island will cost an estimated $34 billion, with over 80 per cent to be funded by public-private partnerships and direct private sector investment. Abu Dhabi Crown Prince Mohammed bin Zayed Al Nahyan has agreed to personally lead a committee to oversee the building of the new capital.

Indonesia’s 2020-2024 National Medium-Term Development Plan (RPJMN) prioritises sustainable infrastructure development with the aim of building an integrated industrial network to improve logistics, citizen mobility and the distribution of goods and services. Better connectivity is crucial across the archipelago’s 17,000 islands. The plan specifically targets opportunities for foreign investors within the sector.

In a televised state-of-the-nation address last week, Widodo pledged to improve the health sector by accelerating fundamental reforms in the wake of the coronavirus pandemic. As of 2017, amendments to the country’s Negative Investment List gives foreign investors a larger stake in sub-sectors such as hospitals, specialised clinics, and medical equipment. At present some 1.2 million Indonesians spend an estimated $2 billion on healthcare overseas each year.

Although Saudi Arabia accounts for nearly 50 per cent of Indonesia’s crude oil imports, the UAE and other nations have recently invested in the sector. The Abu Dhabi National Oil Company and Indonesian state-owned Pertamina recently concluded a memorandum of understanding to develop refinery facilities, while Mubadala has been involved in oil and gas production activity in Indonesia since 2004.