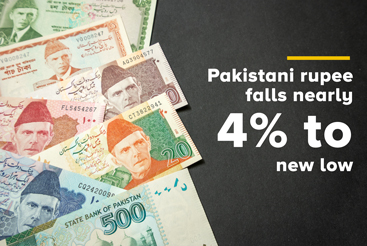 The Pakistani rupee fell nearly 4 per cent on Wednesday, continuing its losing streak to hit a new record low as finance minister Asad Umar travelled to Indonesia for bailout talks with the International Monetary Fund (IMF).

Pakistan needs “bridging loans” of about $8 billion (Dh29.3 billion) to avert a balance of payment crisis amid dwindling forex reserves, which fell to $8.4 billion during the week ending Sept 28, its lowest in four years, creating shortage of dollars and impacting the local currency.

“This move looks like a measure to boost the economy and improve the balance of payments situation in the country as exports are likely to see an upward swing,” Sudhesh Giriyan, chief operating officer at Xpress Money Services Ltd told Gulf News.

Because of this optimism, the Karachi Stock Exchange KSE100 Index extended gains for another session. The index rose 0.75 per cent to be at 38,792.09.

However, analysts feel that more pain may be in store for the battered currency. Pakistan may be headed for more trouble given the ballooning current account deficit. Even if the IMF funds come, it will be barely enough to meet two months of imports.

“That the Pakistan economy and its markets remain in really rough shape, there is no hiding from this and the fact that investors are more than aware of the number of times Pakistan has sought help from the IMF in its relatively short history as a country does inevitably weigh on the reputation of investing in Pakistan,” Jameel Ahmad, Global Head of Currency Strategy & Market Research at FXTM told Gulf News.

“The fast rise in international oil prices, normalisation of US monetary policy, and tightening financial conditions for emerging markets are adding to this difficult picture. In this environment, economic growth will likely slow significantly, and inflation will rise,” he said in a statement.

Washington, which recently suspended military aid to Pakistan over its alleged failure to crack down on the Taliban, has expressed concern about IMF funds being used to repay Chinese loans.

“The downtrend in Pakistani rupee is likely to continue and UAE dirham could fetch 40 against the rupee in short term,” Vijay Valecha, chief market analyst, Century Financial said. A UAE dirham fetched 33.47 Pakistani rupees on Wednesday.