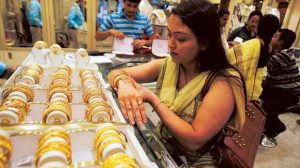 Dubai: Bargains again await jewellery fans in UAE as the precious metal continued to move south, almost hitting its lowest level in more than a year on Monday.

The bullion has taken a beating as investors moved to other assets amid concerns over the Turkish crisis, consequently pushing the US dollar higher.

“[Gold prices dropped] as fears over crisis in Turkey pushed the US dollar higher, dampening demand for the precious metal,” said Vijay Valecha of Century Financial.

“The US imposed sanctions doubled the tariffs on the Turkey’s steel and aluminium on Friday to 50 per cent and 20 per cent respectively, and this sent investors flocking to the dollar.”

Besides, gold is also facing a slowing investment demand due to trade wars, while anticipations of another interest rate increase by the US Federal Reserve aren’t doing any help for the precious metal to regain its shine.

On the jewellery front, there also seems to be limited demand from Indian and Middle East consumers.

During the second quarter of the year, buyers in India were confronted with a high local gold price and seasonal challenges, while Middle Eastern demand was dampened by economic factors, as well as the introduction of value-added tax (VAT) in some markets, according to the World Gold Council.

“Globally, investment demand for gold has waned due to trade wars which has made the US dollar the new safe haven asset,” said Valecha.

“Anticipations of gradual rate hike from the Fed has been one of the key factors keeping a lid on any attempted recovery move for the non-yielding yellow metal.”

“Gold seems to be losing its shine as rising interest rates and a strong bull market in global equities means that there are better avenues for investment.”

When gold prices will pick up

Valecha, however, pointed out that gold’s decline is unlikely to continue in the second half of 2018, citing that the months of August and September have always been positive for gold.

“With festivals like Eid and Diwali around the corner and Indian wedding season coming up, gold jewellery demand is expected to pick up in the second half of the year,” he said.

“Moreover, gold is often given as a gift during festivals like Christmas and the Chinese New Year celebrations and we could also witness the demand rising from the expatriates living in UAE during these winter months.