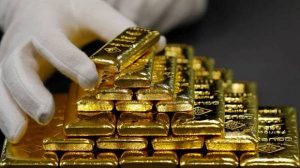 Gold jewellery prices in the UAE went up on Wednesday and are forecast to rally further, as the bullion has recently gained support on the back of a softer greenback and investors digest results of the US elections.

The price of 24-karat gold jumped to Dh149 per gram, up by Dh1.50 per gram from the beginning of the month.

This could spell bad news for UAE consumers who are making last-minute purchases for Diwali. Other analysts also suggest that 24K could go up further and breach the Dh150 mark, hitting Dh151.70 per gram next week.

Retail rates for 22K, 21K and 18K also got costlier by the same margin, according to the prices provided by the Dubai Gold and Jewellery Group, an association of gold retailers in the emirate. Spot gold went up by 0.3 per cent to $1,230.26 an ounce as of 11:52am.

Americans cast their votes on Wednesday in the mid-term congressional elections that could have an impact on Republican President Donald Trump’s presidency.

“The spectre of a Democrat-controlled House suggests that we will see a little bit of risk-off in the market, which should probably benefit gold in parts,” Reuters quoted ANZ analyst Daniel Hynes as saying.

The bullion’s rise has also been due to high demand for gold during the festival of lights, which is considered an auspicious time to buy yellow jewellery.

“Diwali has certainly helped in boosting prices since the Indian festival is a major occasion for buying gold in India,” Vijay Valecha of Century Financial told Gulf News.

“What could support it further is the fall in the value of the US dollar against major currencies on account of the US mid-term elections. The House of representatives was captured by Trump’s opponents, the Democrats, after a gap of eight years and from now onwards, it will be very tough for Trump to push his economic agenda,” Valecha added.

Valecha said the poll results may not work in favour of the US dollar, as the policies in the Trump administration “tend to be inflationary.” “Nevertheless, what is bad for the US dollar is good for gold, as they have an inverse correlation with each other.

Jewellers in UAE said there have been a “decent” demand for gold this week. “Diwali sales have been decent so far. Customers are continuing to buy for their loved ones and family,” said Karim Merchant, group CEO and managing director of Pure Gold Group.

“Our gold sales today are at a steady rate compared to yesterday, as the demand spiked by Diwali festivities and offers are still on.”