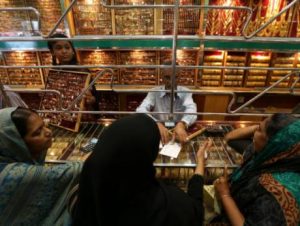 Precious metal not likely to average $1,300 an ounce anytime soon

Gold is likely to feel a little pressure over the next few days, so fans of the yellow metals in the UAE are in for some declines in prices on the retail side, experts have said.

“As more institutional investors look to square off their books so as to ensure a profit before the end of the year, I expect gold prices to be under a little pressure, yet remain range-bound for this year between $1,250 and $1,300,” Karim Merchant, CEO and managing director of Pure Gold Jewellers, told Gulf News.

Gold buyers in the UAE have seen quite affordable jewellery pieces recently, especially over the past several weeks, as the precious metal has struggled to stage a major rally after falling below the key level of $1,300 an ounce. The last time prices soared so much was in October 16, when spot gold hit $1306.04 an ounce.

“During the past two months, the price has been averaging close to $1,280 an ounce, with support remaining firm despite several high volume selloff attempts and reductions in bullish hedge funds bets,” said Ole Hansen, head of commodity strategy at Saxo Bank, in a note.

“While Fed funds expectations for December 2018 has moved higher, ten-year real rates have traded within a relatively tight range. This goes to show that gold is more responsive to events further out on the US yield curve.”

Krishen Rathore, CEO, Century Financial Brokers in the UAE, said that gold has “remained a mixed bag with the political uncertainties” in Germany and talks of US Fed rate adjustments, but there should be some price changes in the coming few weeks

“Gold has been steady in a narrow range between $1,265 and 1,305 [an ounce],” he said in a statement sent to Gulf News. “ “Gold should break out on either side of the range in the coming few weeks, which would then determine the closing price of gold for the year.”

“Gold is likely to remain range bound, with bias to the downside,” Century Financial Brokers added in a research note.