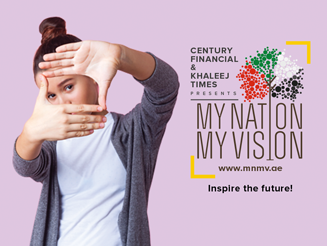 Century Financial, one of the leading regional financial services company in the region, recently joined hands with Khaleej Times to roll out a campaign to celebrate the 49th UAE National Day.

The campaign, titled ‘My Nation My Vision’, was launched across the social media channels of Century Financial and Khaleej Times. It invited UAE nationals and residents to share their vision for the world on ‘My Vision Wall’ and its people on a dedicated microsite, www.mnmv.ae. The creative visions enlisted on the wall can be viewed by site visitors who will be encouraged to vote for the best-posted visions.

The campaign saw wide participation from the UAE community through the hashtag #MyNationMyVision and set the path for the beautiful future. These include popular influencers and media personalities.

Richard Wason, CEO, Lulu Financial Holdings, said: “The upswing recorded by UAE stocks is an indication of the confidence that investors have in the country’s resilience and the ability of its economy to withstand the shocks caused by the health crisis. The recent amendments in the company law and bankruptcy law, as well as the peace agreement, have together helped FDI into the country. With a slew of favorable policies and government support marking the country’s rapid return to normalcy, the UAE is positioned uniquely to witness one of the fastest economic recoveries globally, with the added advantage of creating new opportunities across sectors.”

Bringing life to the campaign is a powerful video featuring distinct visions across different walks of life.

The recently launched campaign has garnered a lot of attention online. The video views have reached up to 95,000 within a span of 10 days with over 500 vision entries on the microsite. Some of the examples shared by the participants highlighted the vision of a sustainable future, affordable health for all, plastic-free culturally diverse world.

The campaign has also provided residents an opportunity to easily express their creative vision for a better future.

The initiative will continue until December 25.