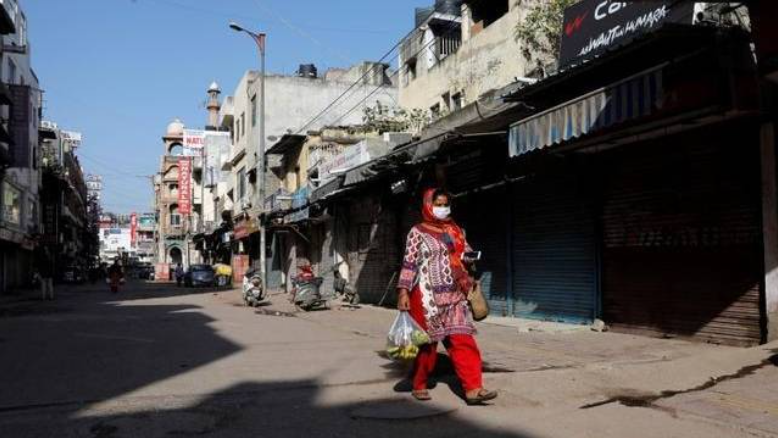 The world’s second most populous nation is in deep crisis, as it grapples with the second wave of covid-19. With hospitals and morgues overwhelmed, the second wave of covid-19 has dealt a much bigger shock to India’s health system than the first wave last year. The country’s total Covid-19 cases passed 18.7 million on April 30, 2021 as it reported another world record number of daily infections of 386,452, while deaths from Covid-19 jumped by 3,498, according to health ministry data.

To curb the resurgence, state governments have imposed stricter restrictions, and this has begun to limit mobility and affect business activity. The impact would be mirrored in India’s gross domestic product (GDP) growth in the coming quarters, and analysts have begun trimming expectations.

Still, this pessimism has not caught up with the equity market so far. From its all-time high of 15,431.75 seen in February, the Nifty50 index dropped to as low at 14,152, but quickly recovered to end the month of April at 14,631. The expectation for any major pull-back like last year also seems very limited with the fear gauge Nifty volatility index (VIX) currently at 23, much lower than the intra-day high of 86 levels it touched in March 2020.

What is keeping the market afloat? This article highlights 10 reasons why the Indian markets are expected to remain resilient despite having one of the highest infection rates in the world.

One big reason responsible for limited impact on stock market lies in the restricted lockdown rules this year which allow greater relaxations for industrial activity and movement of goods than last year. Unlike last April, when large parts of Indian industry were forced to shut down because of a long nation-wide lockdown, this time has been different. Manufacturing and infrastructure activities have not halted, and companies appeared to be proactive this time to persuade most workers to stay back by offering basic amenities and facilities.

Overall, the impact on economic activity is expected to be less severe than that seen in 2020 given the focus on micro-containment zones to contain the current wave of infections, as opposed to a nationwide lockdown.

The government has permitted everyone above the age of 18 years to get vaccinated starting May 1, 2021. This is sentimentally positive and increases hopes of normalcy resuming.

At the same time, vaccination is progressing well as more than 109 million people have received the first dose, and over 17 million people have been fully vaccinated after receiving two doses. Meanwhile, for ensuring better availability of vaccines, the government has relaxed the rules. While 50 per cent of Indian vaccine production must go to the Central government, the rest can be sourced by state governments and the private sector. Any vaccine that is being utilized in the US, Europe or Japan can be applied for in India. Dr Reddy’s would import Sputnik V and distribute in Indian private market. Other vaccine producers are also looking to tap the Indian market.

The United States said this week it will send more than $100 million in medical aid to India, including materials the country needs to ramp up vaccine production and make over 20 million doses. The country would also send therapeutics, rapid diagnostic test kits, ventilators and other protective equipment to India. According to news reports, the first batch of aid has already arrived in Delhi on Friday. European countries Britain, France and Germany have also pledged aid to India.

3.Taking cues about the covid trajectory from global peers

India has been lagging the US and the other nations in terms of its covid trajectory. With the US recovering sharply, it does add to expectations of the same happening in India.

Mumbai is already experiencing a stability at higher levels and recoveries are now similar to or ahead of new cases. Last year’s example also showed that once the numbers start to peak off and recede, economic activity certainly tends to come back because of pent-up savings and pent-up demand.

Global equity markets, especially in the US, are doing well, courtesy of improving economic data. The S&P500 index hit an all-time high of 4,218 earlier in this month. This does seem to have a positive rub-off on Indian equities.

Prior experience shows how the market made a massive comeback after bottoming out in March last year. As a result, investors and fund manager are less likely to offload equities in a big manner this time, thereby preventing a major pull-back in benchmark indices.

Investors are hoping that India’s central bank would keep its accommodative stance longer, given the risks from the second wave. The minutes of the Reserve Bank of India’s (RBI’s) April policy show that members of the monetary policy committee are very worried about growth. The market is pricing in a laxed monetary policy stance for now, which is preventing a steep fall.

The corporate earnings season for the fourth quarter of FY21 has started on a positive note and numbers are expected to be strong going forward on the back of faster-than-expected demand recovery and on account of a low base effect. The combined net profit of 81 companies that declared their quarterly results as on 26th April 2021is up 36.2 per cent year-on-year (YoY).

Meanwhile, pandemic distress and widening lockdowns have failed to curb the markets’ optimism for FY22 with analysts on Bloomberg upgrading Nifty earnings per share (EPS) estimates by 3 per cent. There is a view that corporates have better control of their businesses now compared to last year and hence the pandemic would not hamper earnings potential. Expanding vaccinations and favorable monsoon also support the earnings outlook.

According to the current analysts estimates, the earnings momentum is expected to take Nifty EPS to over Rs 700 in FY22 and to over Rs800 in FY23 after spending seven years in the Rs400 range.

There is no doubt the Indian economy would receive a setback, however, stock markets seem to have factored in the same. On a relative basis, Indian stock markets have underperformed other markets in recent times, as investors were predicting India to witness a second wave just like the other major nations.

There’s no doubt as more and more local authorities impose lockdowns, mobility will take a hit, and high- contact sectors such as hospitality and tourism will be severely impacted. However, the composition of nifty works in its favor with no exposure to hospitality and travel stocks. While asset quality of banks could deteriorate, liquidity support from the government would limit the losses for quality private sector banks which account for over 35 per cent of Nifty Index.

Meanwhile, other parts of the economy like manufacturing, agriculture, or work-from-home and online based services should be resilient and support the nifty. Following financial services; IT, consumer goods and oil & gas account for nearly 40 per cent of the Index.

Overall, India’s economic growth is expected to be of a higher order than elsewhere in the globe and should remain so even after the cut in growth projections on account of the resurgence in Covid-19 cases. There may be some near-term tension in the markets, but most investors will look past the pandemic. Dips are likely to be viewed as buying opportunity by investors and markets should quickly rebound higher. Trading range for Nifty is expected to be 13000-16000.

Long term investors could consider the dip as favorable opportunity to accumulate quality stocks. Portfolio in sectors like Pharma, IT, FMCG, metals and fertilizer sector can be considered as these sectors are expected to do well even in case the lockdowns are imposed.

Reimposition of complete lockdown to contain the virus, shortage of vaccines leading to a speed bump in the inoculation process or ineffectiveness of the vaccine against the new variant will dent the economic activity and hurt consumer and market sentiments. Besides, persistent inflation is another threat, which can erode purchasing power of households, and make it difficult for the RBI to continue its accommodative stance in the coming months.