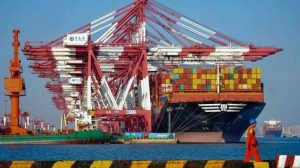 Global financial institutions and economists expect that the ongoing trade tensions between the US and China will negatively impact the world’s economic growth.

Analysts in the region said that the GCC may also have an adverse impact, but the strong economic base can absorb the shocks of global trade war.

They noted that the GCC region may impacted indirectly due to fall in global crude oil prices, slowdown in trade and logistics industries, tariffs on aluminium and outflow of capital.

The International Monetary Fund last week cut its global economic growth forecasts for 2018 and 2019, saying that the US-China trade war was taking a toll and emerging markets were struggling with tighter liquidity and capital outflows.

The Gulf region is mainly an importing region with large trade deficits outside of its oil exports. However, the region could be impacted if the trade tensions escalate, leading to uncertainty in global growth and outflow of capital. “The risk of escalating trade tensions between the US and China could weigh on oil prices as demand from China could go down due to a hit to its economic growth. On the other hand, Saudi Arabia and Russia ruled out any expeditious supply increase to ease price pressures. Moreover, due to the US sanctions on Iran, the market will not have enough capacity left to replace Iranian supplies. These factors could further push oil prices higher,” he said.

In addition, the US introduced tariffs on steel and aluminium imports. The GCC region exported approximately $2.5 billion of aluminium to the US and is the largest exporter after Canada and China in 2017. Introduction of tariffs and focus on usage of domestically produced aluminium would affect GCC exports.

Vijay Valecha, chief market analyst, Century Financial, said tariffs have still not hit hard anyone but if this is escalated, it would turn out to be a catastrophic event with global consequences.

“Without an iota of doubt, GCC will certainly be hit hard as it has a lot of global economic exposure. A highly globalised economy helps us to leverage on global economic growth in good times while in bad times like the ‘Great Recession ‘that occurred in 2008-09, it can throw us out of our balance. It might still be surprising to some, but today’s global economy is interlinked beyond our wildest possible imagination. It’s much more than the old adage ‘When US sneezes, World catches a cold,'” Valecha added.

Legal experts claim that those UAE and GCC companies which are engaged in business with Iranian companies and individuals in strategic sectors like automobile, energy, banking and finance, petrochemical and industrial products will take a hit next month due to the US sanctions irrespective of the fact that they have presence in the US or not.

First round of sanctions is already imposed on Iran as the US pulled out of the nuclear deal earlier this year and the second round will come into effect from November 5.

“After November 4, non-US companies that are owned or controlled by US firms – including foreign subsidiaries of US companies – will no longer be authorised to engage in any Iran-related activities and will once again become fully subject to the primary sanctions. That is of interest here in the UAE and GCC because a lot of US companies have foreign subsidiaries here. The second layer of sanctions are secondary sanctions which are also known as extraterritorial sanctions. Those sanctions can apply to anyone with absolutely no US connection. Under secondary sanctions, where the US government doesn’t have jurisdiction over parties to impose civil or criminal penalties what they can do is sanction foreign companies for engaging in an activity that is targeted under those secondary sanctions,” said Inessa Owens, Associate, International Commercial & Trade Group, Baker McKenzie (based in Washington DC).

Matt Shanahan, partner, Financial Services Regulatory Group, Baker McKenzie Habib Al Mulla (based in Dubai), said even legitimate businesses in the UAE and GCC are facing difficulties engaging in business with Iranian firms and individuals due to strict scrutiny, especially by central bank of closely monitoring activities of bank transactions with Iran.

“There has been an increase in scrutiny and all these financial institutions are becoming very conservative. Some business can be done legitimately, but a lot of businesses are being prevented from dealing with Iran by the inability of parties to get paid. Transfers of currencies from Iran to the UAE through banking system will be more difficult in the post-sanction era. So they are trying secondary sources like using money exchange companies and unfortunately that is not working either. So, ultimately the impact is that even legitimate business which doesn’t fall under secondary sanctions is having material difficulty in transacting,” he said.