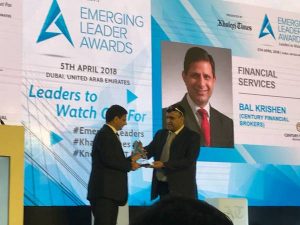 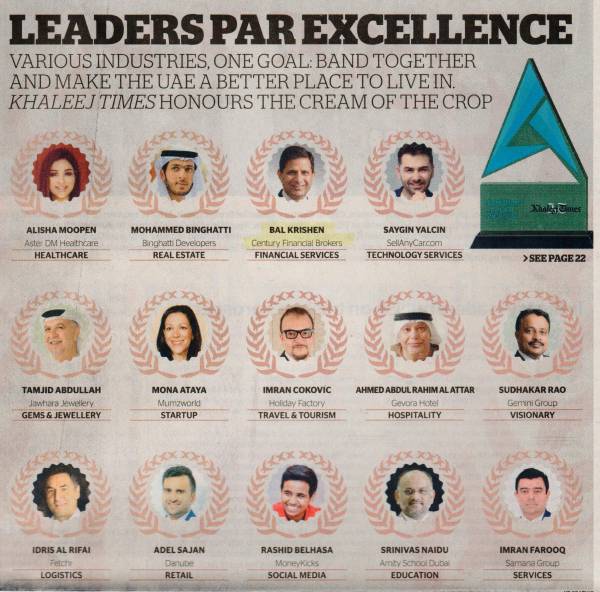 Determination, passion and a strong belief in the idea that you are bringing to life are the key ingredients for the formula that will allow your company to stand out from its competition and succeed, industry experts said at the Emerging Leader Awards.

Organised by Khaleej Times, the UAE’s first English-language newspaper, the event sought to identify and honour the vision, dedication and achievements of various industry leaders in their respective fields. The winners were selected based on their contributions in different sectors across 14 categories.

The evening kicked off with the winners being announced for the healthcare, real estate and financial services categories. Alisha Moopen, CEO of Aster & Medcare Hospitals & Clinics for the GCC; Muhammad BinGhatti, CEO and head of architecture at Binghatti Developers; and Bal Krishen, CEO of Century Financial Brokers, were respectively honoured in each category.

“I am honoured and at the same time delighted to be selected as the emerging leader of the healthcare sector in the UAE,” Moopen said. “It is a testament to our collective efforts as an organisation to live-up to our vision of making quality healthcare easily available and accessible for everyone. It is the sheer hard work and spirit of determination that we have at Aster DM Healthcare, which continues to drive us to push boundaries and scale greater heights of excellence in healthcare.”

Similarly, BinGhatti said that he was humbled and grateful to have received the recognition. “We, as citizens of Dubai, are all inspired by our leaders’ vision that has excelled us over the years as a globally recognised economy, driven by the desire to be number one. We are proud to help embody the vision of His Highness Sheikh Mohammed bin Rashid Al Maktoum, Vice-President and Prime Minister of the UAE and Ruler of Dubai, to dream big and that nothing is impossible. We positively embrace challenges and overcome them every day; this is, as His Highness taught us, the path to true happiness and success in life.”

Krishen noted that he was humbled to receive the award, which is symbolic of the bullish attitude of the UAE and the company. “I would like to sum up that this achievement is a result of having the right team, with the right attitude, at the right time and in the right country.”

“Our mission, when we first launched the company, is the same as our vision now – to empower mothers around the region to make the most informed decisions for their children,” Ataya said, upon receiving her award.

Speaking about the success of Jawhara in the industry, Abdullah said that it was important to have a healthy amount of determination and dedication when undertaking any venture. “You need to have the right motivation, the right team, and the passion for your work to succeed. You have to set your whole mind for an idea to be successful. In addition, technology today is what is acting as an enabler towards business excellence.”

While sales across the UAE took a hit in the first quarter of the year, industry experts say that they are bullish about business picking up in the next few months.

Sajan said that businesses were already seeing a pick up, post the implementation of value added tax.

“In December 2017, we saw a spike in retail sales, as consumers rushed to purchase items before they would be taxed, come the new year. In January, we saw a significant dip in sales compared to the same period a year ago. This was because people that wanted to buy in January, did most of their shopping in December the previous year. Now, in March, we have seen a pick up in business again,” he said.

“I don’t think VAT, which is set at only 5 per cent, will have much of an impact on consumer spending in the long run. Many retailers, including us, have chosen to absorb the cost of the VAT, so that has also made consumers very comfortable with spending. Also, if you look at it, living in the UAE has meant that we have been spoilt in not having to pay taxes. And now, with the introduction of VAT as part of the UAE’s strategy to limit its dependence on oil, we will see a lot of projects that will only improve the lifestyle of residents here.”

Sajan’s observations were echoed by Cokovic, who said that VAT has not had much of an impact on residents planning their vacations. “When it comes to outbound travel, we will see an increase in the number of travellers,” he said.

“People like to travel, and they still want to travel. We were monitoring the situation carefully to see if there was an impact of the VAT on traveller appetite and we have not seen any.”

Al Rifai noted that the UAE is a country that has all the right ingredients. “You have a young population with a lot of purchasing power, and who are very tech savvy. You also have a market that is always ready for disruption and innovation, so you will see a lot of new age business models that will come in and change the traditional way of doing things with new technology.”

“The ecosystem has definitely evolved,” he added. “When I first started the company about six years ago, it was a completely different landscape; now you see a lot of early stage incubators that are helping the ecosystem. There is also a lot of maturity in the market right now. The evolution is that people have realized that they are eager for convenience due to their busy lifestyles, and so there is a shift towards more services as an offering.”