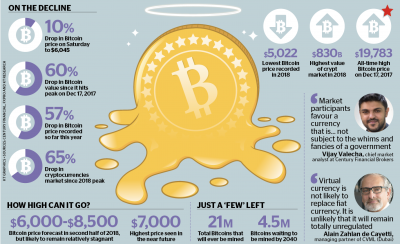 World’s most popular cryptocurrency to test $6,000 barrier again; will it rebound?

Prices of Bitcoin and other cryptocurrencies are expected to recover in the second half of 2018 following persistent declines so far this year due to tightening regulations and government threats to ban virtual currencies, say analysts.

Vijay Valecha, chief market analyst at Century Financial Brokers, believes that the short-term forecast for Bitcoin is likely to remain relatively stagnant with its price expected to fluctuate between $6,000 and $8,500 in 2018.

“Government threats to ban cryptos, tightening regulations and a series of recent security breaches have sucked the life out from the cryptocurrency market in the past few months. While tightening regulation and security breaches will continue to hamper the price of cryptocurrencies, it’s important to note that market participants favour a currency that is borderless and is not subject to the whims and fancies of a government,” Valecha added.

Bitcoin on Saturday fell nearly 10 per cent to its lowest price of 2018 in the wake of the Japanese regulator FSA’s decision to ask six biggest cryptocurrency trading platforms in the country with business-improvement orders.

The cryptocurrency market are down around 65 per cent from its peak total value of $830 billion in 2018. The massive drop has caused Bitcoin, the largest cryptocurrency, to lose an eye watering 50 per cent in 2018 itself, falling by nearly two thirds from its record high near $20,000 in December 2017.

Yuzo Kano, CEO of bitFlyer, the Japanese virtual currency trading platform, apologised for the FSA sanctions and causing concerns and inconvenience to investors.

“We take this order seriously and will make all efforts to improve our operations,” he said.

Transactions on bitFlyer averaged about $2 billion a day during late-April and early-May, thanks in large part to Bitcoin margin contracts popular with Japanese day-traders.

“The market is quite soft, with liquidity lower across the board, especially compared to recent quarters,” said Tiantian Zhang Kullander, a partner of Amber AI Group, a crypto hedge fund. “The FSA punishing operators, the BIS report and the Bithumb hack are all affecting sentiment.”

“The market is still trading on low volumes and has yet to break out of its current downtrend, leaving itself susceptible to sell-offs. Although the market reacted negatively, I view this as a positive for the industry as a whole,” said Ryan Rabaglia, head trader at Octagon Strategy in Hong Kong, in an e-mail.

Some experts noticed that optimism has returned to the market due to Securities and Exchange Commission in the US announced that Bitcoin won’t be considered as securities, hence pushed the virtual currencies higher last week after prolong depression. Bitcoin had increased four per cent in just 24 hours to $6,700 last week on Tuesday.

Valecha expects Stellar Lumens and Cardano to be outperformers as their architecture is easily scalable. Stellar is backed by IBM and can theoretically reach 1,000 transactions per second with a billion unique users.

Cryptos in the UAE

In the UAE, Dubai has announced that it will develop and implement emCash, an encrypted blockchain-powered digital currency enabling citizens to pay for government and non-government services. The crypto currency is being developed by a partnership of Dubai based Emcredit and UK blockchain company Object Tech.

Alain Zahlan de Cayetti, managing partner of CVML (Dubai), said the main driver to issue cryptocurrencies is the absence of heavy regulations or the clear the intent to bypass them.

Alike the US and EU regulators, the UAE is spending an immense energy, talents and resources in order to address the reality of virtual currencies whilst defining a common regulatory framework.

“Virtual currency is not likely to replace fiat currency. It is unlikely that it will remain totally unregulated even if, unlike other technologies, their raison détre is to perate outside the scope of a regulatory framework,” he said, adding that cryptocurrencies will flourish whilst continuing to be a special category of speculative and legally unsecure assets, until they become, very soon, apprehended by judges and legislators.