Khaleej Times – NRI alert: Are you going to remit now or hold? 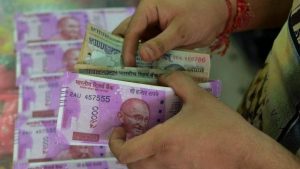 The increase in foreign institutional fund inflows to India along with dollar weakening should see the rupee strengthen to 17.5 level against the UAE dirham. 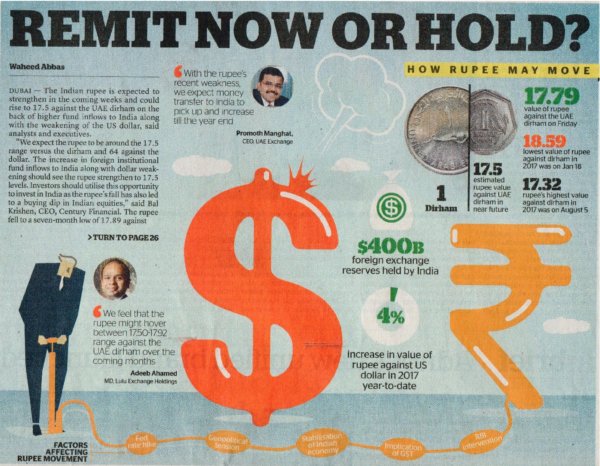 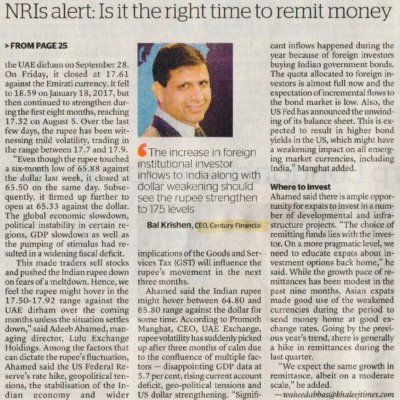 The Indian rupee is expected to strengthen in the coming weeks and could rise to 17.5 against the UAE dirham on the back of higher fund inflows to India and the weakening of the US dollar, analysts and executives said.

“We expect the rupee to be around the 17.5 range versus the dirham and 64 against the USD. The increase in foreign institutional fund inflows to India along with dollar weakening should see the rupee strengthen to 17.5 levels. Investors should utilise this opportunity to invest in India as the fall in the rupee has also led to a buying dip in Indian equities,” said Bal Krishen, CEO, Century Financial.

The rupee fell to a seven-month low of 17.89 against the UAE dirham on September 28. On Friday, it closed at 17.61 against the Emirati currency. It fell to 18.59 on January 18, 2017, but then continued to strengthen during the first eight months, reaching 17.32 on August 5. Over the last few days, the rupee has been witnessing mild volatility, trading in the range between 17.7 and 17.9.

“Even though the rupee touched a six-month low of 65.88 against the dollar last week, it closed at 65.50 on the same day. Subsequently, it firmed up further to open at 65.33 against the dollar. The global economic slowdown, political instability in certain regions, GDP slowdown as well as the pumping of stimulus had resulted in a widening fiscal deficit. This made traders sell stocks and pushed the Indian rupee down on fears of a meltdown. Hence, we feel the rupee might hover in the 17.50-17.92 range against the UAE dirham over the coming months unless the situation settles down,” said Adeeb Ahamed, managing director, Lulu Exchange Holdings.

Among the factors that can dictate the rupee’s fluctuation, Ahamed said the US Federal Reserve’s rate hike, geopolitical tensions, the stabilisation of the Indian economy and wider implications of the Goods and Services Tax (GST) will influence the rupee’s movement in the next three months.

Ahamed said the Indian rupee might hover between 64.80 and 65.80 range against the dollar for some time.

According to Promoth Manghat, CEO, UAE Exchange, rupee volatility has suddenly picked up after three months of calm due to the confluence of multiple factors – disappointing GDP data at 5.7 per cent, rising current account deficit, geo-political tensions and US dollar strengthening.

“Significant inflows happened during the year because of foreign investors buying Indian government bonds. The quota allocated to foreign investors is almost full now and the expectation of incremental flows to the bond market is low. Also, the US Fed has announced the unwinding of its balance sheet. This is expected to result in higher bond yields in the US, which might have a weakening impact on all emerging market currencies, including India,” Manghat added.

Ahamed said there is ample opportunity for expats to invest in a number of developmental and infrastructure projects. “The choice of remitting funds lies with the investor. On a more pragmatic level, we need to educate expats about investment options back home,” he said.

While the growth pace of remittances has been modest in the past nine months, Asian expats made good use of the weakened currencies during the period to send money home at good exchange rates. Going by the previous year’s trend, there is generally a hike in remittances during the last quarter.

“We expect the same growth in remittance, albeit on a moderate scale,” he added.

Manghat said many Indian expats were holding back remitting money because of the rupee’s sharp appreciation in recent months. “Also, we are entering the festival and marriage season in India. With the rupee’s recent weakness, we expect money transfer to India to pick up and increase till the year end,” Manghat added.

With regard to investment in India, he advised NRIs that equity and bond markets are buoyant and doing well. “This year saw equity markets running up massively, making stocks look a bit expensive for now. But those who are keen on long-term investments needn’t wait. They can continue to add their drops to the ocean. The long-term growth story of India is intact,” he concluded.