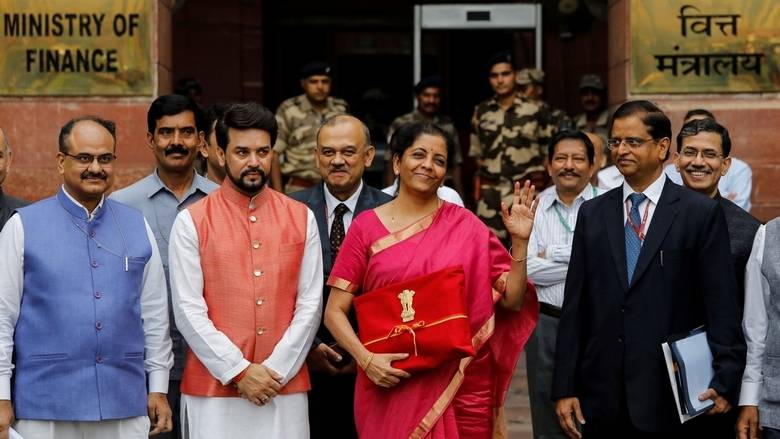 Most promising proposal was issuance of Aadhaar cards on arrival.

Through her budget speech lasting nearly two hours, Sitharaman inspired non-residents with a promise to transform India into a $3 trillion global economic power this year and to further propel its growth with a goal to reach $5 trillion in the next few years.

However, for most non-residents, the most promising budget proposal was the issuance of Aadhaar cards on arrival, without the mandatory waiting period of 180 days to be eligible for it.

Following are the excerpts from their reaction to Narendra Modi 2.0 Government’s first budget.

Yusuffali M.A., chairman of Lulu Group: As expected, the budget has covered almost all critical sectors, which will surely boost India’s march towards becoming a $5 trillion economy. The key take-aways for me are the stress given to rural and agricultural development, women entrepreneurship and making India the global education hub of excellence. The plan to revitalise the railways, the backbone of our internal trade, is highly encouraging.

Dr B.R. Shetty, founder of NMC Healthcare and Finablr: A well-balanced budget that seeks to boost to startups, women and youth. Further ease of doing business in India is expected to attract bigger flow of foreign investors. The study in India programme is a great move. The focus on agricultural investment, research and technology, aviation, infrastructure and affordable housing are positive steps.

Dr Azad Moopen, founder chairman and managing director of Aster DM Healthcare: It is very good to hear that we are striving to become a $5 trillion economy soon. However, regarding NRIs and the healthcare sector, there is not much to sing about. It is good to know that NRIs shall be allowed to take Aadhar card.

P.N.C. Menon, chairman of Sobha Group: Proposed tax benefits and interest deduction up to Rs350,000 for houses priced up to Rs4.5 million will help stimulate demand for the affordable housing segment and is expected to attract first-time homebuyers. The move by the government to introduce a new tenancy law will help streamline the unorganised Indian rental market which is estimated to be an around $20 billion.

Mohan Valrani, senior vice-chairman and managing director of Al Shirawi Group: The best feature is the Rs700 billion bank recapitalisation, plus the fact that the government is going to borrow abroad that will ease the overall borrowing rate. The priority given to the education sector will ensure India’s schools future-ready with a deeper focus on research and new age skills such as robotics and AI.

Dr Ram Buxani, chairman of ITL Cosmos Group: India’s first woman finance minister in her maiden budget has tried to establish that women can manage the money better. Billions of dollars are being spent by Indians in studying in the United States and other countries where students are Indian, money is Indian, faculty is Indian but only soil is foreign. Now on Indian soil, education will be provided. This is a great development.

Paras Shahdadpuri, chairman of Nikai Group of Companies and president of Business Leaders Forum: The finance minister has done a good job in promoting rural India, which can generate new jobs while releasing the pressures on urban cities. For the first time, role of NRIs was mentioned twice. However, major steps to create jobs were not visible. More allocation on health and education could have been announced. Revenue side was not fully spelt out.

Rizwan Sajan, founder and chairman of Danube Group: The budget looks very positive with overall focus on improving standard of living by providing piped water, electricity, gas, housing and toilets to all. The government is definitely focusing on transforming rural India, which is a good sign for the development of the nation.

Dr Dhananjay Datar, chairman and managing director of Al Adil Group: I see the support of private entrepreneurship with regards to the farm sector as a great game-changer. This is a conscious effort to bring majority of the Indian population who are directly or indirectly dependent on the agricultural sector into the mainstream. The 10,000 new farm produce organisations and 80 livelihood business incubators to be set up under Aspire to develop 75,000 skilled entrepreneurs in agro-rural industries will be a big boost.

Kamal Vachani, group director of Al Maya Group: One significant proposal is that corporate tax would be reduced to 25 per cent for companies with a turnover of up to Rs4 billion. The budget offers big relief for homebuyers who have taken loans. The issuance of Aadhar has been simplified to benefit NRIs. Easing of FDI in media and aviation sectors will bring more investments.

Shaji Ul Mulk, chairman of Mulk Holdings: Massive spending in infrastructure will help the economy to expand fast and the government’s plans to upgrade about 125,000km of road connecting rural areas over the next five years at an estimated cost of Rs802.5 billion will change the landscape dramatically. NRIs have reasons to cheer as they will easily get the Adhaar card – a very important move.

Taher Shams, managing director of Zulekha Healthcare Group: I commend the target of making India a $5 trillion economy by 2025. Over the years, the reduced external debt and disinvestments have been beneficial. Thanks to the provision of interesting investment schemes and rebates on house and corporate taxes, that will encourage growth. Additionally, digitalisation of operations across sectors is the need of the hour and a promising move to bridge gaps in efficiencies.

Nimish Makvana, president of The Indian Business & Professional Council Dubai: The initiative of calling for investments in the infrastructure sector shows strong vision. The reduction in red tape for better governance is a loud and clear message for growth and transparency of government. The intention to open investments with FDI in aviation, insurance and media sectors will have big flow of investments and a great opportunity for business the community outside India.

Mahmood Bangara, chairman of the Institute of Chartered Accountants of India Dubai Chapter: Focus on infrastructure will result in high efficiency across all sectors. A clear road map is drawn for overall rural and urban growth. Tax on fuel, surcharge on higher income can hinder growth. The recapitalisation of banks will create more liquidity in the market.

Bharat Bhatia, CEO of Conares: Proposals to simplify tax administration and bring greater transparency to stimulate the economic growth and promote inclusive development are welcome. The government spending assumes huge significance on infrastructure development in the next five years. The move to attract foreign and domestic tourists with the government’s plan to develop 17 iconic tourism sites as world-class tourist centres is commendable.

Adeeb Ahamed, managing director of Lulu Financial Group and Twenty14 Holdings: Focus on connectivity, infrastructure, media and digital technology coupled with ease of living, ease of doing business and digital literacy, echoes the sentiments of the interim budget. The proposal for skilling India, reforming the education system and promoting women-led entrepreneurship will also enhance the economy to a large extent.

Sunny Kulathakkal, president of the Global Organisation of People of Indian Origin: The integration of PAN and Aadhar card is a pragmatic step. The huge investment proposed for railways and the PPP model of development and investments in infrastructure will have a far-reaching positive impact.

T.N. Manoharan, non-executive chairman of Canara Bank: Huge investment on infrastructure is expected to provide stimulus for aviation, water ways, roads and rail transportation sectors. Initiatives to make India an attractive destination for FDI and measures to tap and bring in foreign funds and savings are welcome.

Naveen Sharma, head of Accounting, Audit & Advisory Services Focus Group at IBPC: A step in the right direction to transform the Indian economy from an informal to a formal one and to reach a $5 trillion target by 2024. The Aadhar card on arrival for NRIs, instead of waiting for 180 days, is a game-changer. The ability for foreign investors to buy debt of listed real estate trusts is again an opportunity for NRIs to be part of the real estate story.

K.V. Shamsudheen, director at Barjeel Geojit Financial Services: To get an Aadhaar card one has to be in India more than 182 days. Now the government had decided to remove that clause. I appeal to the government to provide an Aadhaar application processing and delivering facility in all diplomatic missions. Presently, the passport is issued though the Indian network with biometric identification so processing of Aadhaar also will be possible same network.

Promoth Manghat, Group Chief Executive Officer of Finablr: At first glance, the 2019 Union Budget lays out a host of policy initiatives seeking to drive investment-led growth be it easing the rules for FDI inflows, divestment of state-owned enterprises or the call made out by the Finance Minister for public private participation for developmental programmes.

Dr Thumbay Moideen, Founder President, Thumbay Group: Emphasis on strengthening the basic sectors like agriculture, education and infrastructure, while adopting several forward-looking measures in taxation and boosting entrepreneurship/investment, are some of the notable aspects of this budget. Tourism is yet another point of focus. The budget as a whole aims to prepare the country for new and emerging global challenges.

Krishnan Ramachandran, CEO, Barjeel Geojit Financial Services: The finance minister has presented a growth oriented budget setting the road map for the country to become a $5 trillion economy in the next few years. A number of initiatives have been proposed in the budget for an aggressive push the overall infrastructure development. We expect a significant FDI & FPI flows into the country with the expectations that the Government would start raising funds from global markets and currencies.

Nalapad Ahmed Abdulla, Chairman, Credence High School, Dubai: The first budget of Modi 2.0 government provides the path the country would take in the next five to ten years. Government aspires to make India a 5 trillion dollar economy. I think the government has set some realistic goals for most sectors of the economy and has laid down the framework to get there. I welcome the announcement of the New National Education Policy in the budget.

Vijay Valecha, Chief Investment Officer, Century Financial: No big bang reforms, more of a continuation of the interim budget. In a way it was to be expected as the Finance Minister Nirmala Sitharaman faced time constraints. Nevertheless, there are some aspects of the budget which can impact the NRIs; particularly those who are fond of Gold. Custom duty on gold and other precious metals have been increased by 2.5 per cent to 12.5 per cent which should make Middle Eastern Gold more expensive in India and this could hit the Gold retailers here.

Sunil Subramaniam, Managing Director, Sundaram Mutual Fund: I would rate the budget at 7.5 out of 10. While markets have reacted negatively this is a good time to buy as the budget is long term positive for the economy with prudent fiscal management; wide ranging infra initiatives including for real estate and housing; FDI relaxation for aviation, insurance etc; relaxing KYC norms for FPIs; Equating NRIs and FIIs  and steps to regulate and support NBFC especially housing finance etc.

Manish Gunwani, CIO, Reliance MF: This budget has been pragmatic with the view to improve medium term sustainable growth potential. The Government had a tough ask to provide support to the economy without compromising on fiscal prudence. The fiscal deficit target for FY20 has been maintained at 3.3 per cent of GDP versus 3.4 per cent in FY19