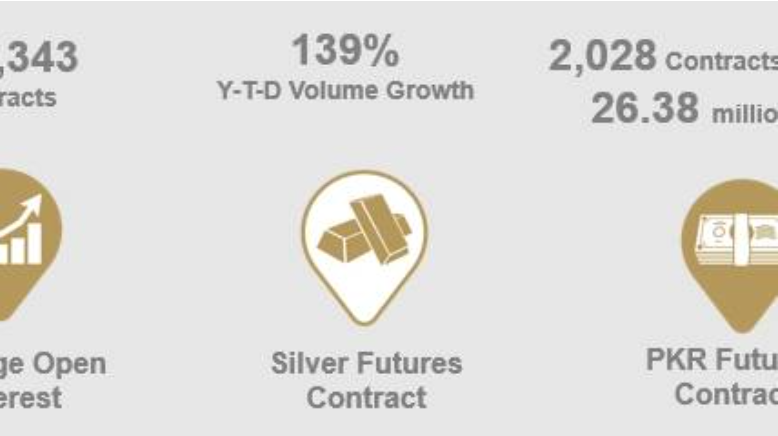 The Dubai Gold and Commodities Exchange (DGCX) on Wednesday announced that it registered a monthly average open interest (AOI) of 208,343 contracts worth a total value of $12,853 million in May.

The Silver Futures Contract recorded a year-to-date (YTD) volume growth of 139 per cent compared to the same period last year.

“Our Silver Futures Contract demonstrated strong growth last month, which is a testament to the increased global demand for the precious metal over the last year, as well as its reputation as an optimal alternative to gold,” Les Male, CEO of DGCX, said.

Meanwhile, he said DGCX new PKR Futures Contract also continued to grow in terms of volume and value, as market participants looked to expand their trading opportunities to the Pakistani market.

“Going forward, we are fully focused on leveraging our recent partnerships with the Global Islamic Financial Services and S & Royal Group Mongolia — as well as our permit from the Israel Securities Authority (ISA), to bring a host of new and value-added products for the benefit of our member base,” Male said.

Bal Krishen, chairman and CEO, Century Financial, said the strong interest in the precious metal following global trends as well as market volatility saw the silver jump to an eight year high earlier in the month. The rising demand for silver has been witnessed due to the pandemic bought under control in most developed nations, he said.

“Silver is heavily used in industries such as electronics and solar panels that is gaining traction as the global economy is on the path to rebound and investors are hopping on to the bandwagon to gain from the current silver trend by using DGCX’s silver contract,” Krishen told Khaleej Times on Wednesday.

About the launch of the long-awaited PKR Futures Contract, he said it has experienced a significant growth since the exchange allows regional market participants to hedge their exposure to the Pakistani rupee.

“Pakistani nationals are the second largest population in the UAE, provides market participants with trading opportunities against a wide range of existing foreign exchange currency products to gain exposure to the large and increasingly prominent Pakistani market,” he said.

Also, he said the UAE -Pakistan trade flows have increased over the years, which could be an added reason for a successful pick up for the newly launched Rupee (PKR) Futures Contract with traders looking to hedge their risk.

“India is the third largest Asian economy with significant trade links with UAE. Inspite of the pandemic, India has witnessed a considerable inflow of FIIs into its equities and bond markets,” he said.

During Covid, he said the Indian rupee had depreciated substantially against the US dollar and investors looking to hedge their currency exposure would often prefer the DGCX’s Indian rupee mini futures contract over its Indian counterpart because of tax free transaction, narrow spreads and its traded and cash settled in US dollars eliminating basis risk.

About the May’s trading volume, he said transactions conducted in a block trading facility which is typically between two parties, prices are set with certainty, and execution is done without delay.

“The liquidity pool available with the DGCX platform is large allowing the average trading volume of block trades to be substantial. The wholesale DGCX trading facility enables members and market participants to pre-negotiate large-scope transactions and bundle transactions without any price drop,” he said.