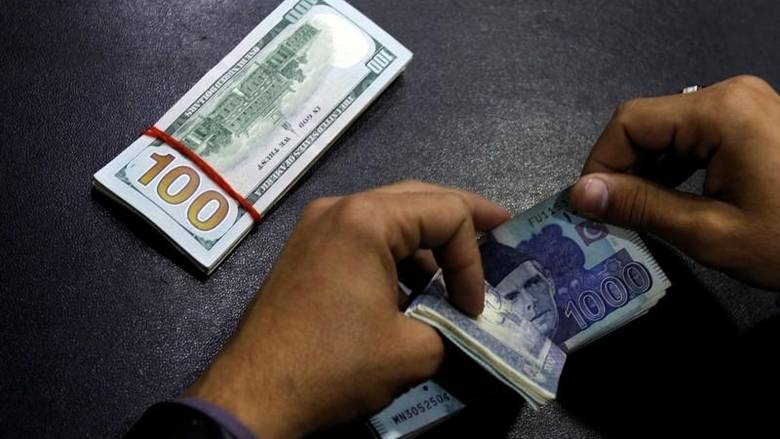 Pakistan's rupee has staged a smart recovery against the US dollar on positive economic indicators, and experts believe it will continue its upward trend despite some challenges ahead.

Analysts and market experts said the currency will be a major beneficiary of higher GDP growth, rising foreign exchange reserves, and consistent remittances inflows of over $2 billion during the first eight months of the current 2020-21 financial year.

The rupee has so far appreciated 1.7 percent against the dollar this year and closed at 157.12 on the interbank market on Friday. Against the UAE dirham, it ended slightly up at 42.77 against 43.6 on January 8, reflecting an appreciation of 1.9 percent.

“The Pakistani rupee has returned to stability chiefly due to higher remittances, debt relief on account of Covid-19 payment relief plan and economic rebound in the country,” experts said.

The country registered a 24 percent year-on-year increase in workers’ remittances to $16.5 billion during the July 2020-January 2021 period, while foreign exchange reserves rose to $20.13 billion during the week ended February 26 from $20.04 billion a week ago, according to the State Bank of Pakistan (SBP).

“The forex reserves held by the central bank increased $70 million to $12.978 billion due to the government’s official inflows. The foreign exchange reserves of commercial banks also increased to $7.155 billion from $7.132 billion,” the SBP said.

The central bank data also showed that Pakistan’s current account deficit shrank by 55 percent on a year-on-year basis to $229 million in January from $512 million in the same month last year due to rising exports and higher remittances.

Devesh Mamtani, the chief market strategist at Century Financial, said the rupee sustained an upward trend on account of positive economic indicators, but some challenges will keep the currency under pressure in 2021.

“From a high of 168 against the US dollar seen during the last year when pandemic started, the rupee has appreciated by 6.5 percent and is currently trading near 158 levels. A wave of positive factors have helped the rupee to gain strength over the past year. This includes factors like the resumption of the IMF’s [International Monetary Fund’s] $6 billion lending facility, narrowing of current account deficit, and G20 lenders’ agreement for second debt relief for the Pakistani economy. The resumption of the IMF bailout programme is especially a huge win for the economy as had it been stalled last year owing to the pandemic,” Mamtani said.

About the rupee’s outlook in 2021, he said its future primarily hinges on the full availability of the bailout package as well the country’s success in raising additional funds through bond issuance. “The IMF facility will help the country win over international investors when it seeks to raise more than $1.5 billion through global bond sales. This is required in order to plug the budget deficit gap, which is currently set at 7.5 percent of GDP. The government needs to strictly adhere to its budget deficit target and not overshoot key expenditure areas so as to balance the overall deficit numbers,” Mamtani said.

He said the IMF’s return is definitely a big positive for the rupee as well as the economy. IMF staff recently reached an agreement with Pakistani authorities in order to complete the second to the fifth round of reviews that were announced in 2019.

“Successful completion of this will likely see funds of around $500 million flowing into the economy. The IMF plans also create optimism regarding the economy with larger and global institutional investors, who will be reluctant to invest and spend without any IMF presence,” he said.

To a question about major challenges to the rupee, he said the Pakistani government’s adherence to budget deficit targets, compliance with broader IMF terms, success of internal bond sales, and a further drop in inflation rates will remain key factors to determine future direction of the currency.

Samiullah Tariq, head of research at Pakistan Kuwait Investment Company, said the rupee is likely to appreciate against the US dollar on account on positive economic indicators as well as stability in the economy.

“Main reason for the rupee’s appreciation is stronger inflows under Roshan Digital Accounts and higher remittances during this financial year. Pakistan has also started availing certain lending facilities to pay for petroleum products,” he added.

To a question, he said the resumption of the IMF plan will further strengthen the rupee in the near future.

“The IMF plan is expected to firm up repayments of existing loans as well as strengthen forex reserves of the country,” he said.

In reply to a question about major challenges, he said higher oil and other commodity prices will keep the rupee under pressure in 2021.

“I expect the rupee may depreciate by two to three percent against the greenback this year.”

About the impact of the Financial Action Task Force’s (FATF’s) possible decision on the grey list, Tariq said the currency will not be impacted by this — be it grey or white.

“I think that we are already seeing significant inflows despite being in the grey list. Supply of the US dollar is getting better with the introduction of new channels for inflows and liberalization of the forex regime, so those seem more important than FATF at the moment,” he said.

“Yes, the blacklist could be dangerous, but grey or white... [but] I don’t think it will have any major impact on the rupee’s future direction.”

Muhammad Nafees, vice-president for finance at the Pakistan Business Council, said the value of a currency is directly related with the current account position.

“The Pakistan economy is getting better every day. An increase in remittances from overseas Pakistanis, investment in Roshan Digital Accounts, increase in exports, and decrease in import of non-essential items have contributed to the increase in the value of the currency. However, Pakistan is still not out of the woods and will need support from the IMF,” he said.

Further, he said China Pakistan Economic Corridor (CPEC) prospects are getting brighter, and more and more countries are realizing the importance of this project.

“It will further support the value of the rupee. I see a very bright outlook for the currency in 2021 and beyond. Pakistan has very well managed the Covid-19 challenge and has announced a full return to economic activities from March 15, 2021,” he said.

Work on CPEC continues unabated even during the peak of the Covid-19 pandemic and several projects for Gwadar Port City have been completed ahead of time, according to a senior government official.

Gwadar Port has already started playing its key role in trade facilitation to Afghanistan as, so far, thousands of metric tonnes of fertilizer and sugar have been delivered to the landlocked country, he said.

“The Gwadar Port and CPEC projects will not only benefit Pakistan and China but also other regional countries, including the landlocked Central Asian states as well,” he added.