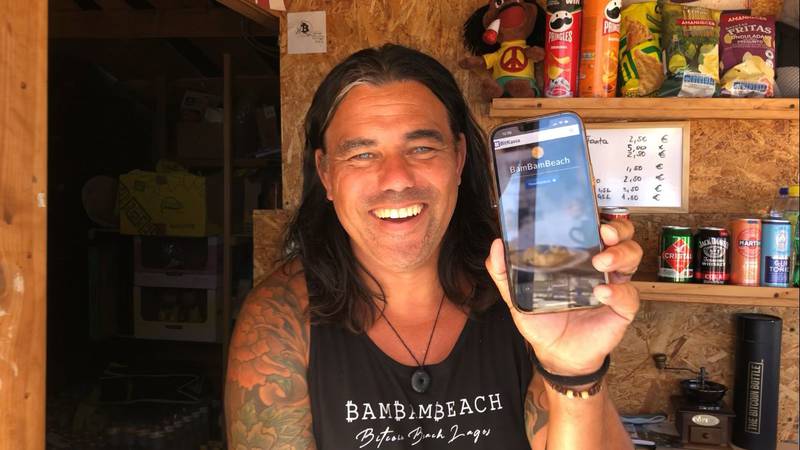 The “Bitcoin Family”, who sold everything they owned to invest in the digital token when it was trading at only $900 in 2016, has lost more than $1 million on their cryptocurrency investments amid market volatility in the past few months.

However, Dutch citizen Didi Taihuttu, who is married and has three daughters, remains unperturbed.

“The cryptocurrency market volatility doesn’t disturb us at all,” Mr Taihuttu says.

“There are two amazing moments in Bitcoin. When we reach the top to make a profit and when we reach the bottom so we can buy again. We are in it for the long term, but at the same time multiplying BTC by trading.”

It has been a rough ride for the cryptocurrency market as prices plummet with some of the most popular companies in the industry filing for bankruptcy.

The “crypto winter” came on the back of 40-year-high inflation in the US, rising interest rates in many parts of the world and recession fears, with Bitcoin falling below $20,000 in June — a long way from its November high of $67,734.

About $2 trillion has been wiped from the market value of cryptocurrencies since late last year, according to data compiled by CoinGecko.

“Even before the current crypto market decline, volatility has always been an inherent feature in the crypto space,” saysDevesh Mamtani, Devesh Mamtani chief market strategist at Dubai-based Century Financial.

“The current increase in Bitcoin volatility has been primarily due to the drying up of global liquidity.”

Global central banks led by the US Federal Reserve and the European Central Bank have begun the process towards achieving interest rate normalisation. The Fed has also started to reduce the size of its balance sheet under quantitative tightening, according to Mr Mamtani.

“Another factor causing Bitcoin volatility is the panic-selling bouts. Bitcoin prices tend to react their worst whenever they are near their major support drops,” he says.

In terms of an appropriate level to buy Bitcoin, the asset’s overall bearish cycle is intact, Mr Mamtani says. This has caused a sell-on-rise scenario whenever prices have spiked.

Conservative investors can look for further dips below the $20,000 to $18,000 zone for good entry levels, he says.

“However, it is essential to note that cryptocurrencies tend to be very volatile. Therefore, targeting an entry at a specific level can be very tricky, especially during periods of high volatility and immense market turmoil,” Mr Mamtani warns.

Mr Taihuttu continues to buy Bitcoin during the dip. He had exited his Bitcoin positions earlier and subsequently bought back in.

This is the third market cycle the Taihuttu family has experienced and “by now you understand that BTC will always create a new path”.

“We sold Bitcoin when it was around $55,000 after it fell from $70,000. We exchanged a part of Bitcoin capital into USDT [stablecoin Tether] to buy back cheaper,” he says.

“We exchanged 15 per cent of our Bitcoin holdings into stablecoins, but we gained more than 3,000 per cent since 2016 when we sold everything to invest in Bitcoin.”

Investors with an average buying price in the $14,000-$18,000 zone (who purchased during the bull cycle between October 2020 and November 2020) can look to start booking their profits at these levels, he says.

Technically, for Bitcoin prices, the most critical level to watch out for would be $17,500-$18,000. A break below these levels could signify further losses for the asset class, according to Mr Mamtani.

Meanwhile, the Dutch family of five has travelled the world in the past six years. They currently run a Bitcoin bar in one of the most popular beaches in Lagos, Portugal.

“We still travel, but at the moment we are in Portugal for the next six months as I opened the BamBamBeach bar in Lagos, where people can pay with BTC using the Lightning network,” Mr Taihuttu says.

Lightning is a payments platform built on top of Bitcoin that enables instantaneous and low-fee transactions. Mr Taihuttu plans to convert all vendors in the beach into Lightning-friendly retailers.

“I converted another beach bar, a restaurant, a sailing school and an adventure company to accept Bitcoin as well, so slowly we will grow to become the Bitcoin beach in Europe,” he says.

“The future plan is to decentralise BamBamBeach by tokenising it and using a decentralised autonomous organisation, among other measures.” Mr Taihuttu believes the cryptocurrency industry is the "biggest peaceful revolution" changing the future of money.

“It’s the first time in our lives we are experiencing a real decentralised working form of money,” he says.

Although he dabbles in other coins and stablecoins, Mr Taihuttu’s goal is to obtain more Bitcoin.

“I don’t need to work any more as we have enough Bitcoin, but because I like it, I trade, speak, write, create YouTube videos and much more.”

Although Bitcoin and cryptocurrency investing have matured over the past two years with more participation from institutional investors and large Wall Street banks, the need is for sound and stable regulation by developed market authorities, according to Mr Mamtani.

Failing this, the sector will continue to be looked upon as speculative and more barriers to entry will exist, he says.

The Taihuttu family store their portfolio of cryptocurrencies in secret vaults across the world, with 70 per cent of their holdings in cold storage and 30 per cent in hot wallets, which they access for daily expenses.

Hot wallets are connected to the internet and give cryptocurrency owners easy access to their digital coins. The cold wallet storage method is more secure as it is completely removed from the internet ecosystem.

“We store a bigger share in cold wallets because we don’t need the BTC as we live a normal minimalist lifestyle where ownership of luxury products is not necessary,” Mr Taihuttu says.

“We believe each BTC will go up to $1 million and will by then be usable as peer-to-peer cash, so why would we exchange this real money to the fake one that is printed unlimited?”

“Taking the holdings offline can reduce online hacking as well as other platform-related risks to a great extent,” he recommends.

“Investors should look to buy the hardware from a reputed provider only. The investor should also be careful with the private key storage and not disclose this to anyone.”

On the other hand, investors looking to trade and invest in Bitcoin for a shorter duration, of less than a year, can look to invest or trade through platforms such as futures exchange brokers and CFD (contract for difference) providers, Mr Mamtani says.

The split to store such assets would depend on investors' requirements for liquidity.

“For example, an investor who requires immediate liquidity and is fearful of further market decline can look to keep most of his holdings in a hot wallet,” Mr Mamtani says.

“An investor who is not concerned about market volatility and can sustain without immediate cash requirements can look to put only some percentage of his Bitcoin holdings in a hot wallet for short-term opportunities and play.”