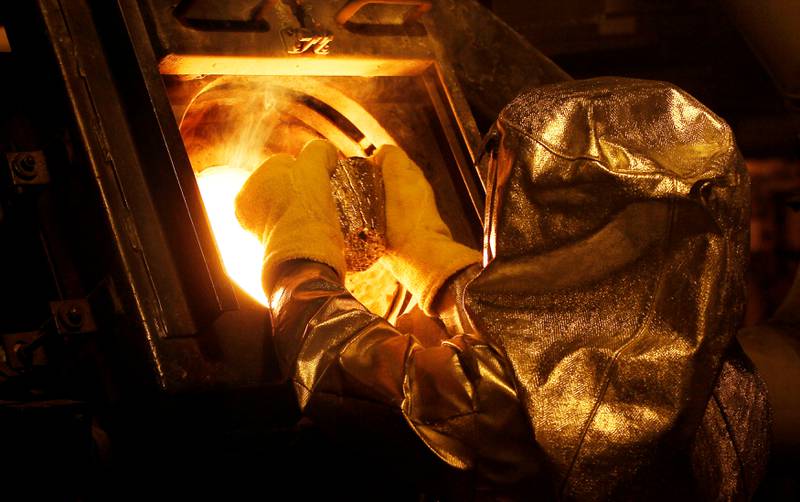 The National - Is it too late to boost your exposure to commodities to hedge against inflation?

With US consumer price inflation hitting a 30-year high, investors are scrambling for ways to protect their portfolios against rising prices and falling currencies.

Many are responding by piling into commodity stocks, which are a traditional inflation hedge. Should you join them?

History shows the price of natural resources such as oil, gas, precious and industrial metals and agricultural products rise in value when inflation climbs.

The inflation-hedging power of commodities has been “strong and consistent” for more than three decades, according to research by fund manager Vanguard published in August.

It found that a 1 per cent rise in unexpected inflation (rather than standard, anticipated price growth) drives a 7 to 9 per cent increase in commodities.

That makes them superior to another inflation hedge, index-linked bonds, and shares generally, which “have a love-hate relationship” with inflation, says Sue Wang, an assistant portfolio manager at Vanguard’s Quantitative Equity Group.

“Commodities stand apart as a vehicle for hedging against inflation,” she says.

So far this year, the link has held firm. Energy and food prices rose sharply, while in May, copper hit an all-time high of more than $10,700 per tonne.

The S&P GSCI Commodity Index is up 73.68 per cent over the past year. That would have turned a $10,000 investment into $17,368, but investors cannot rely on commodities at every point in the investment cycle.

Commodities are having a moment, but they are also notoriously cyclical. The past year has been terrific, but there is a danger that today’s investors are coming to the party too late.

“When inflation strikes and currencies lose their purchasing power, tangible assets will save you by holding their value."

Yet, he is cautious today as some of the price drivers may be a temporary “reaction to the pandemic, global supply chain disruptions and bad weather in many countries”, and could soon reverse if economic growth slows.

Commodity price growth has been turbocharged by a range of factors, including fiscal and monetary stimulus, the post-vaccination economic rebound, US President Joe Biden’s $1.2 trillion infrastructure splurge and continuing high demand from China. Yet, several of these impulses are now fading.

The economic bounce back is slowing, Chinese demand is falling and central bankers are preparing to taper stimulus.

The post-Covid-19 spike in global mining stocks has gone into reverse. London-listed, globally diversified mining giant Rio Tinto fell 27.22 per cent over the past three months, while Anglo American dropped 20.47 per cent and BHP by 18.4 per cent.

Copper and gold were immediate beneficiaries, while iron ore, coal and crude have all hit long-term highs in recent weeks.

“Commodities as a group appear to have further to run now that inflation prints have started picking up, with no sign that supply has begun to respond in a meaningful fashion,” Mr Beauchamp says.

It has been a cracking year for commodities, with oil rising 60 per cent, cotton up 45 per cent and sugar up 25 per cent, but this raises an old question about chicken and eggs, David Jones, chief market strategist at Capital.com, says.

The more pressing question for private investors is this. Can it continue? “If you take the central banks’ view that inflation is likely to be transitory, then a buyer of commodities now risks getting involved near the end of the current cycle,” Mr Jones says.

However, if you think inflation will persist – and the latest shock US inflation figure suggests it will – Mr Jones reckons upping your commodity exposure could boost returns and hedge your portfolio.

“Just don’t take for granted that the great run we have seen this year is a surefire bet,” he says.

There are no surefire bets in investing, but every investor should consider adding some commodity exposure to their portfolio if they do not already have it.

You may find that you do – for example, a fund tracking the FTSE 100 will be heavy on oil stocks such as BP and Royal Dutch Shell, and globally diversified mining giants.

Inflation is often described as a caged tiger, Devesh Mamtani, chief market strategist at Century Financial in Dubai, says. “Once released, it is tough to tame it again.”

Prices are likely to continue climbing as range-positive feedback loops come into force. For example, higher natural gas prices drive up the cost of fertilisers, which increases food prices. “What started as a supply chain issue is becoming broad-based inflation,” Mr Mamtani says.

Inflation is likely to climb higher, with the US producer price index up 8.3 per cent over the past year. In China, growth is at 10.7 per cent in the year to September.

The Invesco DB Commodity Index Tracking Fund gives you diversified access to 14 of the most heavily traded physical commodities, including crude oil, natural gas, gold, silver, wheat, corn, sugar, copper, zinc, silver and aluminium. It is up 69.88 per cent over the past year.

Any investor who doubted whether gold is still an inflation hedge got their answer when the price jumped $30 after the US inflation figure was released, Fawad Razaqzada, market analyst at Think Markets, says.

“Bitcoin and Ethereum rallied, too, confirming suspicions that the cryptocurrency rally has been partly fuelled by rising inflation,” Mr Razaqzada says.

“Only invest as part of a diversified portfolio and consider focusing on defensive commodities that everyone needs, like water and food,” Mr Kirbaj says.

Commodities are cyclical and relatively high risk, so make sure you understand what you are getting into and invest as part of a diversified portfolio.

Spreading your money across dozens of companies through an ETF tracker makes more sense than buying individual stocks.

Inflation no longer looks transient. Nor does the investment case for commodities.