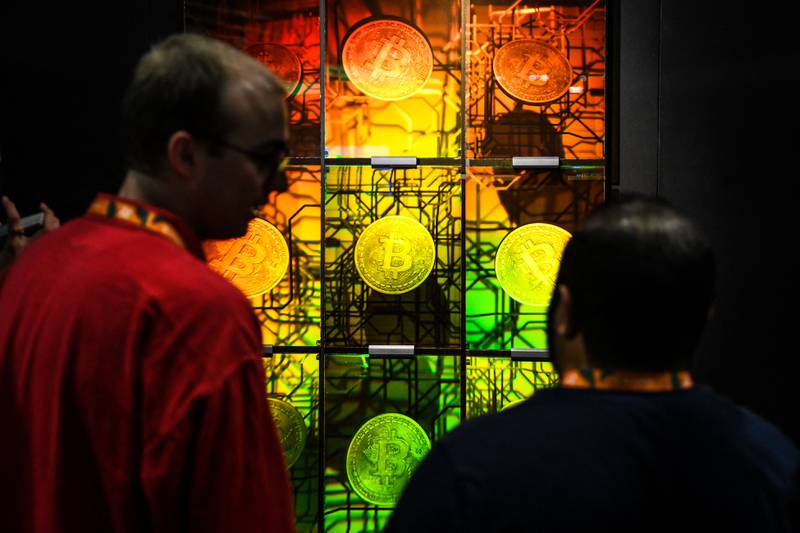 The National - Is now the right time to buy Bitcoin?

Bitcoin divides people like no other investment. While some will be mourning their losses after last week's spectacular cryptocurrency crash, others will be celebrating what they hope will be an end to this pointless distraction. All, however, will be wondering what happens next.

Bitcoin fans will be hoping that last week’s blistering sell-off is only a temporary setback and wondering whether they should take the opportunity to buy more in the hope of cashing in on an equally spectacular recovery.

Critics of cryptocurrencies might be feeling vindicated, but they could also be quietly wondering if they should buy some Bitcoin, just in case.

So what are we looking at today — the actual death of Bitcoin or an unmissable buying opportunity?

Even by its volatile standards, the crypto world has gone crazy. Bitcoin is down 60 per cent from its record high, falling from $67,000 last November to a low of $27,000 last week, with Ether, BNB, XRP, Cardano, Solana, Terra’s Luna and others also in meltdown.

The cryptocurrency sector has lost a cool $1 trillion in market capitalisation and, at the time of writing, was valued at $1.3tn. But there could be worse to come, says Sam Kopelman, UK manager of global cryptocurrency exchange Luno.

He warns against rushing to buy the dip as Bitcoin could fall to $20,000 before finding its floor. “This could be the start of a long-term bear market for crypto.”

Mr Kopelman blames the sell-off on “the chaotic combination of interest rate hikes, fears of an imminent recession and military conflict in Europe”.

However, Bitcoin is not the only high-profile victim of these wider trends. US technology stocks, the other great growth story of the post-financial crisis era, are also in meltdown.

New York's tech-heavy Nasdaq index is down about 30 per cent this year — and the same forces are at play.

More than a decade of near-zero interest rates and multitrillion-dollar stimulus has inflated asset bubbles everywhere but the era of easy money is now over, as the US Federal Reserve increases interest rates and slashes stimulus in a belated attempt to curb today’s raging inflation.

Yet the cryptocurrency market has issues of its own, Vijay Valecha, chief investment officer at Century Financial, says.

The collapse of the TerraUSD stablecoin hit sentiment and hastened the flight from digital tokens.

“Stablecoins are key elements of the crypto market, where traders park funds as they move in and out of other tokens. This loss of confidence could be an existential test for the entire digital asset ecosystem,” Mr Valecha warns.

The spate of cryptocurrency fraud cases has further undermined confidence.

“Crypto’s Wild West reputation was reinforced by news that infamous [Bulgarian] crypto queen Ruja Ignatova has been added to Europol's most wanted list for convincing people she invented a cryptocurrency to rival Bitcoin before disappearing with billions.”

The crash is a tough pill to swallow, Mr Jobson says, especially for younger investors who have taken big risks to gain exposure.

Interactive Investor research shows that cryptocurrency is the investment of choice for 45 per cent of people between 18 and 29 years old.

“An alarming number have funded this through credit cards and other forms of credit, leaving them with a double whammy of investment loss and debt, made worse by rising interest rates,” Interactive Investor said.

However, they do have one hope — we have been here before.

“Crypto evangelists will point out that the market has fallen before then skyrocketed to record highs, but as interest rates rise and the economy slows, we are in a different world today,” Mr Jobson says. Bitcoin has yet to prove that it offers the world a killer application it can’t get elsewhere and, given that most investors do not really understand how it works, its price moves are still largely driven by sentiment, whether positive or negative.

“Confidence is shaken and people are in no mood to take on risk. So, even when we see periods of relative calm, it does not last long.”

“Bitcoin has survived corrections of 70 per cent to 80 per cent in the past. This may be an opportunity for institutions to build positions at better levels.”

Recent events appear to have cleared up one myth about Bitcoin — that it is now digital gold, a safe haven in a crisis.

Instead, it has correlated rather too closely with stock markets, piling on the risk rather than adding protection.

Bitcoin is not alone in this, Mr Razaqzada says. “If you look at gold and FX markets, there are no signs of any serious haven demand. The likes of the Japanese yen and Swiss franc have shown no strength whatsoever.”

Gold, silver and cryptocurrencies are struggling because they do not pay any interest or dividends, making them poor inflation hedges.

All three are priced in US dollars and the surging value of the greenback has made them relatively more expensive for those buying in foreign currencies, making them even less appealing.

It is difficult to see how cryptocurrencies could bottom out given today's poor economic fundamentals, says Mr Razaqzada.

“Granted, we will see bounces here and there, but as long as government bond yields are on the rise and the dollar is in an uptrend, the risks remain skewed to the downside.”

Tech stocks and cryptocurrencies are now closely correlated and both find themselves in a tough situation, says Walid Koudmani, chief market analyst at financial broker XTB.

“It requires a recovery of the general sentiment before we see an improvement.”

Traditional investment advice is to keep your nerves in the middle of a crash and avoid crystallising your paper losses by selling up in a panic.

That has worked pretty well with shares, as history shows stock markets have a habit of recovering over time.

Bitcoin has recovered from its previous setbacks, too, but here is the proviso. That was in a very different world to the one we find ourselves in today.

However, one thing has not changed: don't invest money you cannot afford to lose.