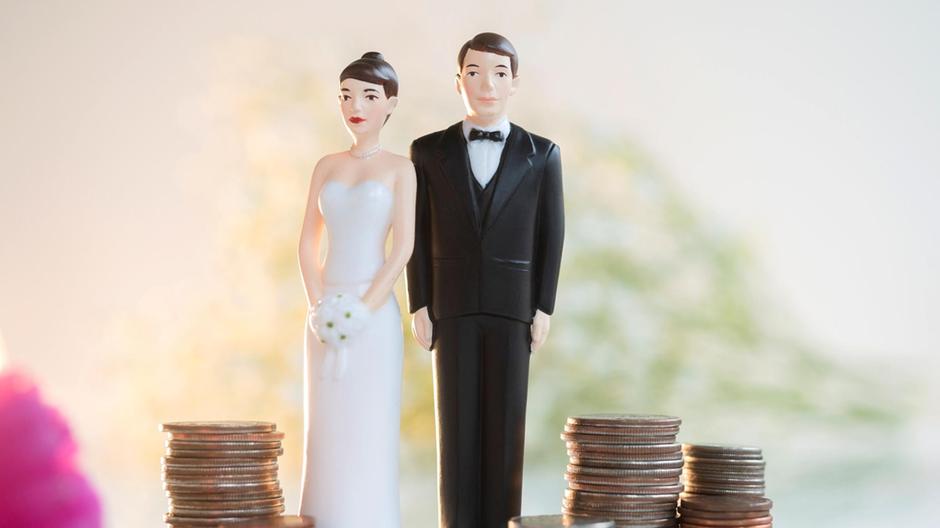 The National - Marriage and money: Top tips for newlyweds to find financial bliss

When Tripthi Tharoor and Nikhil Ravindran were married in August 2020, their wedded life got off to a rocky financial start because Mr Ravindran had lost his job just a month before their big day.

It didn’t help that Ms Tharoor, 26, a flight analysis co-ordinator, was also paying her MBA fees every month and had her salary cut as a result of the financial impact of Covid-19.

“In 2020, after the deductions for my MBA fees and Covid-19-induced salary cut, I was basically earning next to nothing. We faced four months of financial struggle,” Ms Tharoor, an Indian expat, tells The National.

However, their situation began to improve when Mr Ravindran, 30, found a job as a procurement engineer in December and Ms Tharoor's salary was restored to its original level earlier this year.

“From December 2020 till February 2021, my university payments continued to be deducted and we were living on my husband’s income alone. From March, I have been getting my full salary and we are back on track with our finances,” she says.

Ms Tharoor says she is a saver and managed to keep aside most of her income while living with her parents until the wedding. Her then-fiancé had more expenses because he was living alone.

However, before the wedding, the couple had an honest conversation about how they managed their finances, with Mr Ravindran admitting he was a spender. They decided that the responsibility of saving would be handled by Ms Tharoor, and Mr Ravindran would transfer money to her account every month to prevent him from wasting it on unnecessary purchases.

Financial experts say it is vital for couples to have an honest money talk before saying "I do". This includes being truthful about their current financial situation, debts owed, spending habits and goals for retirement or buying property.

“Getting a good grasp on each other’s spending habits will better enable the couple to make budget decisions, set spending limits and even help on deciding how to merge their money after marriage, if that must be done in the first place.”

Ms Tharoor and Mr Ravindran have maintained separate accounts after their wedding and also have their respective car loans as well.

“We were quite open about what we were earning and our monthly expenses before we got married,” Ms Tharoor says.

“We balance each other. The experience to manage finances as newlyweds can get challenging, especially if your spouse has different spending habits.”

She says that managing a house, paying for groceries and other related bills is a different experience compared with life before their nuptials, when she wasn’t accountable to anyone about her finances.

“It’s not always easy to shift from a mindset of looking after your own finances to balancing your and your spouse’s needs. It gets even trickier if the two individuals have different spending habits, financial beliefs and goals,” says Mr Valecha.

The most common problem newlyweds experience is different spending habits. Some people are natural savers and risk-averse, while others are big spenders. Others rack up debt, while some are natural investors.

“Whichever profile you and your spouse most resemble, it’s best to recognise bad habits and address and moderate them. The way to handle it is to talk about it openly and work out a blended spending style that’s respectful of both their needs,” Mr Valecha adds.

Ms Tharoor and Mr Ravindran do not divide household expenses equally, however, there’s a tacit understanding between them that bills need to be paid.

“I take care of some costs, while my husband pays the remaining bills. Or, if he has spent a big amount in a particular month, then I take care of smaller expenses to support him,” Ms Tharoor adds.

If one spouse’s costs are going overboard in a certain month, there is an open discussion to cut down on social expenses to maintain a budgetary balance, she says.

The couple eventually plan to migrate to Canada and are now saving to have enough funds to make the big move.

A Couples & Money study conducted by financial services company Fidelity Investments in 2018 found that seven in 10 couples generally communicated very well with their partner about finances, while one in four said they communicated exceptionally well. Furthermore, two thirds of couples indicated they discussed some aspect of their finances at least monthly, according to the survey, which polled 1,662 couples aged 22 years or older in a married or long-term committed relationship.

When it comes to marriage and money, experts say honesty and a system of checks and balances are key to reaching long-term financial goals.

“Things like debt and credit cards are concealed and slowly exert pressure on the relationship over time. Transparency is the cornerstone of any successful relationship – you should be as honest about your finances as with everything else in life. Take the time to sit down and lay all your cards on the table.”

Sagarika Badyal and her husband Kartikay Aggarwal believe it’s important for spouses to have honest conversations about debts.

The couple, who tied the knot in March 2020, have separate bank accounts, although they have considered setting up a joint account. They contribute an amount that is proportionate to their salaries towards meeting family expenses.

“We didn’t have a money conversation as such before getting married, but we have been on the same page about saving and making sure we had enough liquidity for a rainy day,” Ms Badyal, a 30-year-old consultant for an oil and gas company, says.

The couple do not have any debts and are particular about paying their bills on time.

Although Ms Badyal has not invested in any assets as yet and her earnings have accumulated in her bank account, Mr Aggarwal, a 32-year-old Indian expat who works as an actuary at an insurance company, has been investing in the Indian stock market for the past few years.

“I am a spender and he is a saver. I spend on household stuff and clothes whereas he spends on technology products such as an Apple TV or a new sound system. But, we always consult each other before making big-ticket purchases like a TV or an iMac,” she says.

The couple are currently saving to buy a property in the UAE.

Setting up joint investments and retirement plans are a good way for couples to establish trust, show their commitment to one another and plan for the future together, Mr Ritchie says.

“However, merging finances can be scary for some. After all, if something bad happens to the relationship, how would you decide what’s mine and what’s yours?” he adds.

There’s no one-size-fits-all approach – some couples combine it all, others do not merge finances at all, or have a combination of both with separate and shared accounts.

“Keeping finances separate could foster harmony in the marriage, especially if the two individuals have very different spending styles. However, it could be simpler to navigate financial planning, goals and everyday life if the couple has a joint account instead of two separate accounts,” Mr Valecha says.

“Some legal affairs are also streamlined with joint bank accounts. In the event that one of them passes away, the other will retain access to the funds in a joint account without having to refer to a will or go through the legal system to claim the money,” he adds.

However, a joint account can be problematic if the relationship ends in divorce. It can also lead to a loss of financial independence.

Another common problem in most marriages is when one spouse earns more than the other. Salary inequality can lead to guilt and resentment – especially if it is not talked about, says Mr Valecha.

“Some couples have joint accounts and act like the disparity doesn’t exist, others contribute 50:50 to the expenses no matter the disparity and others follow the proportion rule,” he adds.

Newlyweds also need to be careful to avoid overspending. Honeymoon expenses, dinner dates, home renovations or moving into a new house can add a lot of debt burden.

“They need to come up with a realistic and achievable budget and stick to it so they can take care of their needs and wants, while making sure they have something left behind as savings,” Mr Valecha adds.

Newlywed couples should also establish an emergency fund and update their beneficiaries on key financial accounts, he says.

“One of the first things couples should do after getting married is review and update their beneficiaries on key financial accounts, including investment accounts, savings accounts, wills, insurance policies [life, health, auto and homeowners],” Mr Valecha says.

“Failure to do so will not allow your spouse to inherit any of your assets should something happen to you. Also, if neither of you have written a will, that’s something you’ll want to do sooner rather than later.”