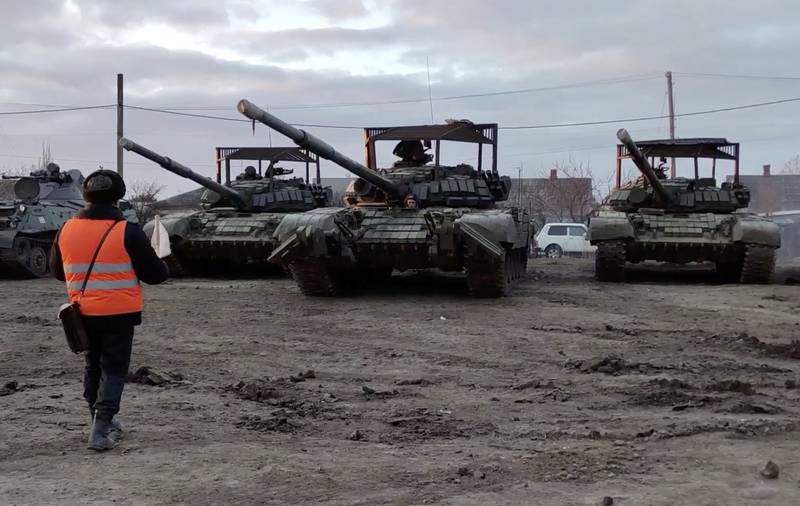 The National - Russia-Ukraine crisis: how worried should investors be?

Investors are said to dislike uncertainty more than anything else and few things are more uncertain than war.

Markets are on tenterhooks as they wait to see if Russian President Vladimir Putin will invade Ukraine after signing a decree to recognise two breakaway regions in the east of the country as independent entities or is merely toying with the idea to rattle the West.

Meanwhile, the US will announce economic sanctions against Russia today, the White House announced on Monday.

When invasion seemed imminent on February 14, Europe stocks fell hardest, with Germany’s DAX down 3.7 per cent, followed by Italy’s FTSE MIB, France’s CAC 40 index and Spain’s IBEX 35 all dropping about 3.5 per cent. London’s FTSE 100 dipped by about 2 per cent.

By the time the US market opened, the panic had calmed on signs of de-escalation. Yet, the invasion threat hasn’t disappeared.

War isn’t good for much but how bad is it really for share prices?

In 2014, when Russia invaded and annexed the Crimean Peninsula, the US S&P 500 fell 6 per cent, yet markets quickly recovered their initial losses, says Arun Leslie John , chief market analyst at Century Financial.

The S&P fell by a more dramatic 43 per cent after the Russian invasion of Georgia in 2008, but “that had more to do with the US sub-prime mortgage crisis than Russia”, he adds.

The US-led invasions of Iraq in 1990 and in 2003 caused global stock markets to quickly fall by more than 10 per cent on each occasion. However, they were on the up within months.

Airlines were worst hit, but there were also winners. Defence and weapons contractors were in demand, while gold and oil soared. By November, Wall Street had recovered its losses.

It was a similar story during the Second World War. The US stock market fell 3.8 per cent when the Japanese attacked Pearl Harbor on December 7, 1941, but the Dow Jones was 50 per cent higher by the time the war ended on September 2, 1945.

While conflict carries a high human cost, the impact on stocks can be relatively muted, Paul Craig, portfolio manager at Quilter Investors, says.

Markets may even climb if investors anticipate a swift victory. “We saw this when the US invaded Iraq in 2003, as early successes led the market to believe the war would be quicker than expected. CNN even ran an article headlined, ‘Bombs fall, stocks rise’.”

As a rule, markets are more responsive to weak company performance than wider geopolitical events, as they should be, Mr Craig says. So don’t get too distracted by war talk or nervously reshuffle your portfolio.

“Corporate earnings and the economic environment are more important for markets than conflict politics in the medium term, especially since Russian trade flows are relatively small,” Mr Craig says,

Unexpected geopolitical events can trigger strong market reactions, with markets crashing one day and bouncing back the next, according to David Morrison, senior market analyst at Trade Nation.

“It's very difficult for traders to consistently profit from event-driven moves as you require a crystal ball to predict the outcomes in advance,” he adds.

The big danger this time is that the Russia-Ukraine tension could worsen the existing inflationary crisis if the West imposes hard-hitting sanctions on Russia and Mr Putin retaliates by blocking oil and gas supplies to Europe.

“For European indices, particularly the German DAX, the negativity could be longer lasting due to the country’s connections with Russia,” Mr Morrison says.

Investors may seize on any dip in US markets as a buying opportunity, Mr Morrison says. “It’s unlikely the US would involve itself directly in the conflict, but who knows for sure.”

Any move to block Russia from using the Swift international payments system would be particularly damaging for Italian and French banks, which have a combined $50 billion exposure to that country, according to the Bank for International Settlements, while Austrian banks have $17.5bn. Total US banking exposure is lower at $14.7bn.

Yet tensions can also bring winners, as oil giants Shell, BP, Exxon Mobil and Chevron all climb with oil prices.

Investors who are wondering how highly markets rate the prospect of war can probably get their answer by looking at oil prices. Or gold, which has been climbing and could soon hit $1,900. That is partly due to Ukraine, but the precious metal is also in demand from investors who fear inflation will erode fiat currencies.

War isn’t the biggest worry facing investors right now, as US inflation hit a 40-year high of 7.5 per cent in January.

That could force the US Federal Reserve and other bankers to increase interest rates from today’s record lows and bring the era of cheap money to a sudden end.

Today’s stock market valuations could prove harder to justify if inflation beds in, which could make the US technology sector look even more overpriced as it erodes the value of their future earnings.

British billionaire investor Jeremy Grantham has been warning of what is only the fourth “superbubble” in history, after 1929, 2000 and 2008, saying: “When pessimism returns to markets, we face the largest potential markdown of perceived wealth in US history.”

Investors should increase cash to between 10 and 20 per cent of their portfolios as threats multiply, George Ball, chairman of wealth manager Sanders Morris Harris, said in a recent note to investors.

“Stocks have been premium priced for quite some time and a mixture of rising interest rates, military threats and the highest rate of inflation since 1980 makes a modest baby bear move in stocks likely in the near term,” he added.

“Investors seem to be emerging from hiding and are picking up bargains, but you should be prepared for further wild intraday swings,” he says.

The Russia-Ukraine stand-off looks set to drag on, Mr Beauchamp says. “While tensions have eased, there is no actual solution in sight. It looks like the weakness in stocks will be with us for a while yet.”

Investors have notably short attention spans and their minds will soon drift to other subjects if Ukraine slips out of the headlines. Number one will be inflation, which they see as a bigger threat than Mr Putin. The danger is that we get both.