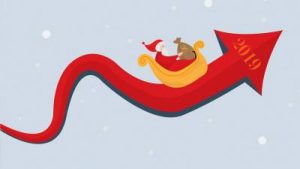 The National – Should you hop on board the Santa rally?

This is traditionally the most wonderful time of the year for investors, as stock markets have a habit of rising strongly in the final weeks leading up to Christmas and the New Year.

This is called the Santa rally – a statistically proven phenomenon, as markets put on a festive front as the holiday season gets into swing.

Investors could do with some good cheer after a disappointing 2018, so will we end the year with a fireworks show?

You may not believe in Father Christmas but there is firm evidence for the Santa rally, as UK wealth manager Brewin Dolphin has discovered.

It crunched the data and discovered that the final two months of the year have outperformed the previous 10 months put together in 25 years out of 34, a convincing 73.5 per cent of the time.

Its figures are based on the FTSE 100 but the pattern can also be seen across global stock markets.

Alisdair Ronald, senior investment manager at Brewin Dolphin, says the few exceptions came in the 1980s and in 2007, at the start of the financial crisis. “Otherwise our data suggests the Santa Rally is real.”

So what drives the Santa sleigh? Nobody knows for sure although Mr Ronald pins it on a combination of festive cheer, tax planning and annual bonuses. “You could make the case that the Santa rally is almost a self-fulfilling prophecy. Investors anticipate it and try to get in ahead of everyone else,” he says.

Historically, the best couple of weeks tend to begin after December 10, he adds. “It is being pushed into earlier in the year as investors gear up for the annual phenomenon.”

Chris Beauchamp, chief market analyst at online trading platform IG, which has offices in Dubai, said there is another seasonal factor at play. “In the US, the pre-Thanksgiving bounce in equities is as traditional as the roast turkey people eat at this time.”

Mr Beauchamp says US investors remain optimistic despite October’s share price sell-off. “Markets are sufficiently oversold to be primed for a bounce. How far it goes is another matter, but there are signs of a possible end to the selling and some will now be asking, is the bottom in?”

He says US indices have now completed another part of the ‘W’ formation that usually accompanies a big sell-off: “We have had the slump, a short-lived bounce, then another drop. Next comes the more sustainable rally, although of course nothing is certain.”

Gordon Robertson, director of financial advisory group InvestMe Financial Services in Dubai, says that while the Santa rally is real, it faces strong headwinds as the US Federal Reserve continues its policy of lifting US interest rates.

Higher interest rates drive up both business and borrowing costs, which hits profits, while consumers have less in their pockets after paying more for mortgages and other credit. “As a result, we are probably witnessing the end of the 10-year bull market run.”

However, Mr Robertson warns against trying to time the market, whether than involves chasing a Santa rally, or fleeing a bear market.

Instead, he says you should stay invested for the long run, and keep charges to minimum with a low-cost exchange traded fund (ETF). He suggests the iShares Core Growth Allocation ETF (AOR) that invests in a balanced global portfolio of stocks and bonds.

Vijay Valecha, chief market analyst at Century Financial Brokers in Dubai, says 2018 has been a rollercoaster year for investors as stocks initially flew upwards due to US President Donald Trump’s tax cuts, then crashed down on fears of a hawkish Fed and higher interest rates. “However, there is always a good probability of stocks rallying in the last month of the year.”

Mr Valecha expects US consumers to be spending freely this holiday season, with unemployment down to just 3.7 per cent and consumer confidence near an 18-year high. “Analysts expect a 5 per cent in holiday sales when compared to last year, which should bode well for equities.”

He names two ETFs that could help you benefit from rising consumer spending both in the short and long-term: the SPDR S&P Retail ETF (XRT) and Vanguard Consumer Discretionary ETF (VCR).

Konstantinos Anthis, head of research at forex broker ADS Securities in Dubai, warns that investors hoping for a Santa rally this year may be disappointed. “Plenty of people look to pick up bargains in December but our view is that stocks peaked earlier in the year and now may not be the best time to be long on equities, particularly US ones.”

Mr Anthis pins this on a combination of factors. “First, trade war uncertainty is keeping investors on the defensive, particularly with little hope of a meaningful outcome at the G-20 meeting.”

There is a growing concern that corporate earnings have peaked as the effects of Trump’s fiscal stimulus starts to reduce, he adds. “Finally, the Fed’s tightening schedule currently points towards another 0.25 per cent on rates in December, with two or three more hikes to follow in 2019, which will further slow growth.”

Mr Anthis is inclined to sit this holiday season out. “Your best opportunity may be to go short on certain sectors, notably US technology.”

He is also looking at shorting Italian banks in case of a full-blown confrontation with the EU over the country’s budget, and UK banks as Parliament seems likely to reject the draft Brexit agreement.

Mr Anthis suggests that long-term ‘buy and hold’ investors should explore defensive stocks in the healthcare, consumer staples and utilities sectors, as the US nears the end of its growth cycle. “However, it’s not quite there yet so this positioning might take some time to bear fruit.”

Investors have good reasons to wish it could be Christmas everyday but as global uncertainty and stock market volatility grows this could be the year that Santa does not pop down our chimneys.