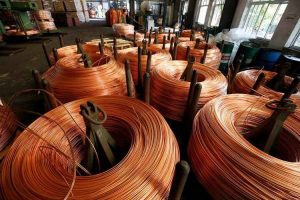 Zawya – Copper stopper?: Will Donald Trump, a Chilean miners’ strike or electric cars have the biggest impact on demand ?

As the third-most widely used metal in the world, after iron and aluminium, copper prices are impacted by the same global issues facing all investors, such as Donald Trump’s trade tariff war and China’s slowing economy. However, it also comes with its own industry-specific set of issues with regards to supply and demand.

Three-month prices on the London Metal Exchange on Tuesday rose 0.4 percent to $6,316 per tonne by 0713 GMT on Thursday. Zawya looked at the data and spoke to some analysts to get a sense of the short-term and long-term outlooks for the metal.

Figures released on July 20 by the International Copper Study Group (ICSG), a global industry body representing producers and buyers, showed that in the first four months of this year global copper mine production rose by 6.1 percent. This was mainly due to a 15.5 percent rise in production in Chile, the world’s biggest copper-producing country. Large increases were also seen in other major producers such as Indonesia, Peru, Congo and Zambia, but these were offset by production disruptions in mines in Canada and the United States, which dropped by around 10-11 percent during the same period.

The biggest issue currently facing the supply of copper is the threat of industrial action by workers at Chile’s Escondida mine, which is the largest copper mine in the world. “Unions at the Escondida copper mine said that negotiations with management had broken down and that an agreement did not look likely before next week’s deadline,” analysts from ANZ said in a note, according to a report by Reuters on Tuesday. “This could see the mine suffer another strike-related disruption,” it added.

A final offer was made by the mine’s operator, BHP, to Escondida workers on Wednesday, Reuters reported.

Investors will be looking closely as the outcome of negotiations as the price of copper surged above the $7,000 a tonne mark in June, the highest since January 2014, when news of the worker dispute began to surface.

“As with any commodity, the major factors impacting copper price are demand, supply and inventory. About 40 percent of the annual copper demand comes from China… it is clear that Chinese hard economic data will be among the numbers that can cause most volatility in this commodity,” Vijay Valecha, chief market analyst at Dubai-based Century Financial Brokers, told Zawya in emailed comments earlier this week.

Valecha said industry data from Europe and China “suggests stronger Chinese copper demand and in 2018 we expect (the) global copper market to be in marginal deficit”.

He said London Metal Exchange Copper inventories showed supply had declined from an all-time peak of 383,075 metric tonnes in March this year to 255,325 metric tonnes currently.

“A seasonality study of last two years suggests that the high demand is likely to last till September, which indicates that short-term price trend for copper is bullish,” he added.

However, figures released last week showed China’s economy grew at its slowest pace since 2016 during the second quarter of 2018, which is likely to impact its demand for copper.

“Long-term, copper consumption is expected to spike significantly on account of higher intensity of usage in electric vehicles and renewables,” Valecha pointed out.

His comment was backed up by a report in June by consultancy firm IDTechEx, which was commissioned by the International Copper Association (ICA). The ICA report forecast that the growing number of electric vehicles on roads will fuel a nine-fold increase in copper demand over the next decade.

“Our research predicts this increase will raise copper demand for electric cars and buses from 185,000 tonnes in 2017 to 1.74 million tonnes in 2027,” Franco Gonzalez, senior technology analyst at IDTechEx, said in the report, according to a Reuters article published in June.

“Each electric bus is expected to use 224-369 kg of copper per vehicle and electric cars around 83 kg per vehicle. This is in contrast to 20-25 kg of copper used in internal combustion engines. Copper mining is a long gestation project and with new production not likely to come on stream quickly, they seem ordained for higher prices,” Valecha said.

Despite this upbeat long-term outlook, Menke was not optimistic for a rally in copper’s prices in the immediate short-term. “We see prices now better aligned with fundamentals and expect them to consolidate around $6250 per tonne. Consequently, we do not believe current levels offer a buying opportunity,” he said.

Just as China is facing domestic issues, it also has to contend with a trade war with U.S. President Donald Trump, who has threatened to impose tariffs on all $500 billion worth of imported goods from China. However, Menke did not believe this would have a major impact on the price of copper going forward.

“While the tariffs announced by the United States target metal-containing consumer goods, e.g. air conditioners or washing machines, the impact on overall metals demand for these kinds of products should not be affected too strongly,” he said. “Will US consumers buy fewer washing machines or fridges as a result? We do not think so. Either, they will switch to a domestic product or they will stick with the Chinese one.”

The Gulf region imports about twice as much copper as it exports, therefore while any price rallies may be good for investors they will be bad for consumers in the region and the industries that dependent on it.

“Middle-East is a large copper consumer and high prices are inflationary for the region, since they are used for almost everything from electronic goods to construction equipment,” Valecha said.