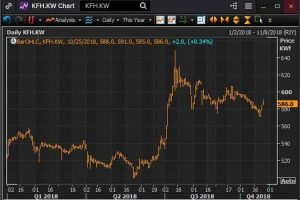 NCB’s Q3 net profit was up 15.4 percent and was largely in line with analysts’ estimates

Shares in National Commercial Bank (NCB) dropped on Wednesday, despite the Saudi lender reporting a 15.4 percent rise in third quarter (Q3) net profit for the year 2018, which was in line with what analysts had expected.

NCB’s results were largely in line with analysts’ expectations, with SICO bank having forecast it would make a quarterly profit of 2.46 billion Saudi riyals.
“NCB reported net income broadly in-line with consensus. The growth in interest income and asset yields were lower than what we have seen for other Saudi banks this quarter so far but is still healthy,” Pritish Devassy, head of equitiy research at Al Rajhi Capital, told Zawya by email.

So far this year, the bank’s stock had added 18.26 percent, outperforming the stock market index which has risen 4.26 percent since the start of 2018.

Data from Eikon shows that the Saudi banking sector has added more than 9.75 percent from January to date.

On NCB, Valecha said: “The stock has a lot of room to run up as foreign ownership right now is only 1.58 percent when compared to the maximum permissible limit of 49 percent.”

In May 2018, NCB announced the appointment of Faisal Omar Alsakkaf as CEO.