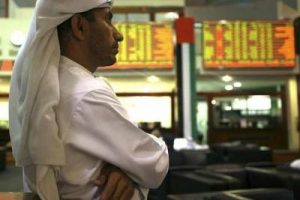 A sharp drop in oil prices during the month of November and a mixed set of third quarter (Q3) 2018 earnings results weighed on investor sentiment in the region.

Brent oil prices dropped 22.2 percent in November, from $75.47 per barrel to $58.71 per barrel. Continued oversupply and weak demand were the main drag on oil prices.

According to a monthly Reuters poll of 13 leading Middle East fund managers, participants have become more defensive following the drop in oil prices and expect on balance to reduce their equities exposure and increase their fixed income portfolios.

“Economic activity in the emirate has been lagging as real estate prices dropped and domestic demand faltered, prompting the government to announce a series of measures to stimulate growth. Traditional growth engines of Dubai economy such as real estate, trade, transport & hospitality have remained weak,” Raghu Mandagolathur, head of research at Kuwait Financial Centre (Markaz) said in a blog published on the company’s Marmore website.

“On a valuation basis, the overall market looks highly undervalued, currently trading at a P/E of 7.5 when compared with the S&P GCC Composite Index valuation of 14.8,” Mandagolathur added.

Nishit Lakhotia, head of research as Bahrain based bank SICO, told Zawya by email that Emaar Properties led the Dubai index lower “on weak 3Q earnings and overall negative sentiments and newsflow towards RE (real estate) and hospitality sector in the emirate.“

Lakhotia said that Abu Dhabi’s stock market was also dragged lower “due to both Etisalat and FAB (First Abu Dhabi Bank) declining 4.5% and 1.6% MoM (month-on -month) and together (they) have 65%+ weight in the index”

Saudi Arabia’s index dropped 2.58 percent in November as the sharp drop in oil prices weighed on petrochemical shares in the Kingdom.

“Going forward, some clarity on OPEC strategy today after the meet can possibly act as a trigger. Saudi budget will also be closely watched. Further, we need some cooling off in geopolitics tension for market confidence to return,” Lakhotia said.

“We saw some decent QFI (qualified foreign investor) buying towards end of November, so possibly this is a sign that some of the foreign institutional investors have started repositioning into Saudi ahead of FTSE and MSCI inclusion,” Lakhotia added.

Index complier MSCI will include Riyadh in its benchmark emerging market index, which is expected to attract billions of dollars from foreign funds to the market – both passive and active funds. In June, MSCI said it would upgrade the kingdom to emerging market status in phases from mid-2019.

Kuwait’s premier market index was the best performer in the region, adding 1.6 percent in November.

FTSE had announced in September 2017 that it will add Kuwait’s stock market to emerging market index in two equal stages in September and December 2018.

MSCI announced that it will consider reclassifying Kuwait from Frontier Market to Emerging Market status at its annual market review in 2019.

“Monthly volume increased by a third to reach 1.9 Bn (Billion) shares during November-18 despite a decline in monthly value traded which dropped by 8.1% to reach KWD 284.8 Mn (Million) as compared to KWD 309.8 Mn during the previous month,” investment company KAMCO said in a monthly eqities market report.

“Small cap stocks dominated the monthly performance chart during the month, while prominent large-cap monthly gainers included Kuwait International Bankwith a gain of 10.5% followed by Human Soft and Viva Kuwait with monthly gains of 9.5% and 8.8%, respectively,” the report added.

The Qatari market was also among the gainers during the month, adding 0.62 percent.

Shares in 25 companies dropped, while 20 companies made gains. The real estate index was the best performer and a Thomson Reuters index of Qatari real estate shares showed that the index gained 12.21 percent in November.

In late November, Egypt’s cabinet gave preliminary approval to a proposed amendment to the way bank taxes are calculated. Shares in banks like Commercial International Banks dropped on concerns over the proposed law.

“The move is a positive from macro perspective as it will raise an additional EGP 10 billion in income for the government and will raise the treasury yields, thus making it more attractive for foreign investors. It will also force the banks to increase the lending to private institutions rather than parking it on government securities,” Valecha added.

However, Valecha noted that the move has rattled the banking stocks and Commercial International Bank “which accounts for almost one-third of total market capitalization of Egypt has fell by 6.76 percent in November alone”. He expects the fall to be short lived, however, adding that the law is positive for the overall economy.

A Thomson Reuters index of Egyptian banking shares shows that they dropped in value by 5.39 percent in November.

Bahrain’s index was among the best performers, adding 1.07 percent.

“AUB (Ahli United Bank) was the most actively traded stock in Nov-18 with BHD 16.6 Mn worth of its shares traded on the exchange. GFH and Batelco followed with BHD 1.7 Mn and BHD 1.1 Mn worth of shares traded,” the KAMCO report said.

“In terms of investor participation, local investors’ contribution declined as compared to the previous month and were mainly sellers in the market. Omanis accounted for 73.7% of total value of shares bought during the month (73.4% during October-18) and 90.0% of volumes (84.1% during the previous month),” according to the KAMCO report.