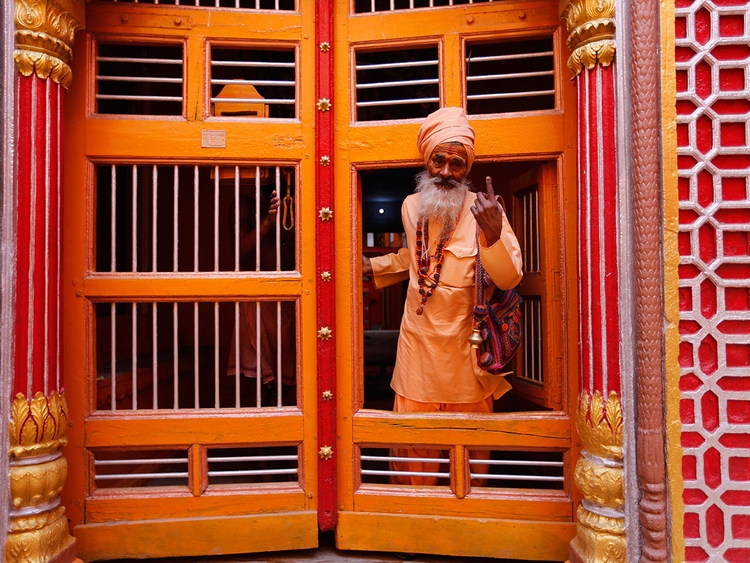 An Indian man displays the indelible ink mark on his finger after casting his vote in Varanasi, India, Sunday, May 19, 2019. Indians are voting in the seventh and final phase of national elections, wrapping up a 6-week-long long, grueling campaign season. Counting of votes is scheduled for May 23.Image Credit: AP

DUBAI: Indian stock markets may surge this week in the run-up to Thursday’s final results as the exit polls favoured the incumbent National Democratic Alliance led by Narendra Modi.

The Bombay Stock Exchange’s Sensex index has gained more than 5.16 percent in the year so far as foreigners have positioned themselves in the market with an inflow of $9 billion. On Sunday, poll of polls gave Modi’s BJP-led National Democratic Alliance (NDA) a comfortable majority with 300 seats and the Congress and its alliance was left far behind at 127 seats.

“We are expecting a volatile week if news channels don’t concur on exit polls otherwise it would be less volatile,” Vijay Valecha, chief investment officer at Century Financial told Gulf News in an interview.
On Friday, the Sensex index gained the most in two months. The Sensex ended 1.44 percent higher at 37,930.77. The Nifty index gained 1.33 per cent to end at 11,407.15. Valecha expects more upside if NDA, considered as market-friendly, comes to power.

“The sharp rally in Indian equity markets in last 2/3 weeks is indicating the fact that the market is now starting to price a higher probability of the incumbent party coming back into power. However despite the recent market rise, valuations look reasonable given earnings recovery in the fiscal year 2020,” Nitin Jain, principal fund manager at Kotak Mahindra (UK) said.

But currently, valuations stand on an expensive side. “We think consensus expectations on earnings growth of 26/18 percent for FY20/21 is optimistic and expect more cuts ahead. However, the normalization of earnings for financials will help earnings growth to reach double digits. In terms of sectors, we are overweight private banks, property, IT services, consumer discretionary and oil and gas,” Gautam Chhaochharia, UBS’ Head of India Research said.

Chhaochharia said recommend investors to avoid being overly aggressive, wait for a correction, and enter the market at better valuations.