Netflix vs Disney’s Share Price: Which Stock is a Better Quarantine Buy? 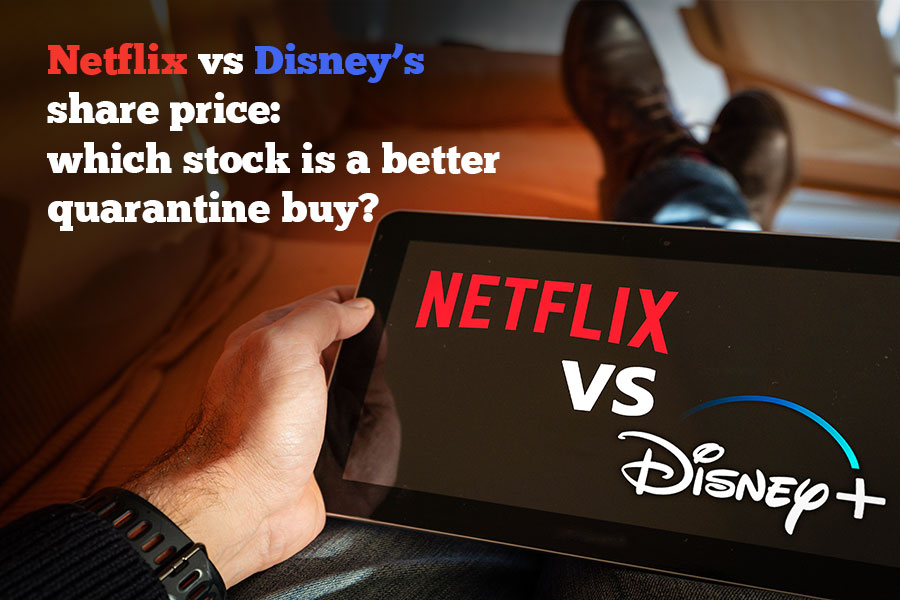 Streaming platforms are experiencing a boost as millions around the world are forced to stay indoors. Netflix’s [NFLX] share price has made gains in 2020 while Disney’s [DIS] share price has fallen, however, the winner is far from obvious.

A quick glance at the share price performances of Disney and Netflix in 2020, and it seems there is an obvious frontrunner. Netflix gained 13.5% from the start of the year to 2 April, while the Disney, along with hundreds of other top companies dragged down by the Coronavirus pandemic, has fallen by 33%.

However, as tempting as it can be to pit these two streaming rivals against each other on such simple terms, the bigger picture is much more complex.

Disney, unlike Netflix, is not just a streaming and production company, but an all-round experiential entertainment business that includes theme parks and multiplex experiences. While Disney’s streaming service Disney+ is thriving, the other segments of its business have been hit badly by the pandemic, leading its share price to flounder. 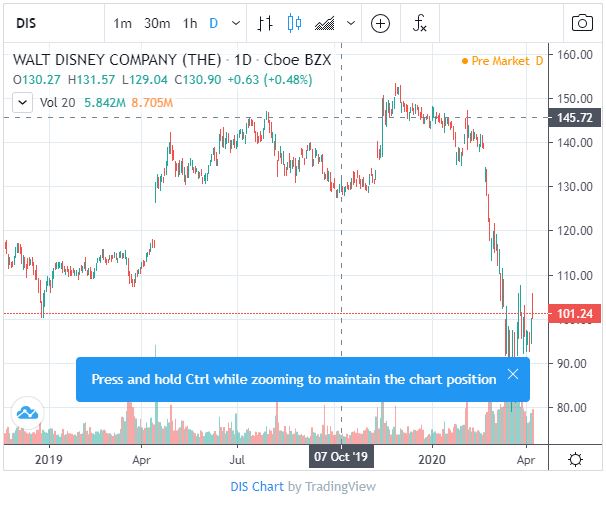 In fact, the company is now one of the few businesses that’s expected to stick to its guidance figures for the year after the coronavirus ravaged corporates around the world. Financial research firm Trefis expects that Netflix will not only deliver its guidance numbers, but it says the streamer — which has roughly 167 million users — is likely to surpass expectations when it comes to adding new subscribers this year.

It’s hard to see the downside for Netflix at the moment. 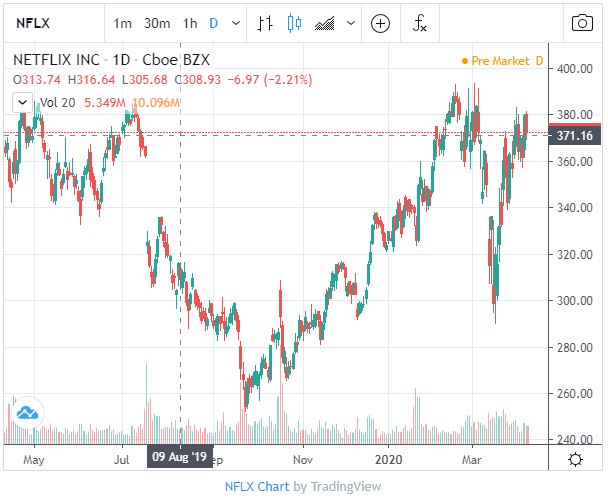 The key disruption is likely to come in the form of a slowdown in production activity — an area the company is aware of, having offered $100m to support cast and crew that have suddenly found themselves out of work as production schedules are cancelled. But even here, the company has stated that it has a pipeline of new content in place that is yet to be released that could stretch for months. The platform also has a wealth of still-popular shows in its library.

Some have gone as far as to predict that Netflix will see increased cash flow during the next few months. The streamer is likely to see not only more sign-ups than usual to the service, but also fewer cancellations, which may result in higher revenues overall, Andrew Tseng writes in the Motley Fool. With all production ceased due to the coronavirus pandemic and lockdown rules, it also means the company is investing less in original content for a few months, reducing its outflows.

The stock is currently approaching its multi-year range resistance, around the $380 to $385 zone, according to The Street. It’s a level the stock has not surpassed for several years, according to Bret Kenwell, apart from a brief period in 2018. If the shares can break out beyond this mark, Netflix has the potential to surge above as high as $400, he says.

Netflix’s underwhelming 2019 performance was largely to do with rising competition. While coronavirus has boosted the stock, the streamer has yet to face the launches of competing platforms Quibi, Peacock and HBO Max, which are likely to have an impact on it in the near future.

Disney is down, but not out

Disney’s streaming service Disney+ has had a spectacular few months since its US launch in November, amassing nearly 30 million subscribers in just three months.

The platform’s March launch in Europe (across the UK, Ireland, Germany, Italy, Spain, Austria and Switzerland) coincided with lockdown measures implemented by governments. Research from Nokia Deepfield recently showed that Disney+ currently accounts for 18% of all internet video traffic in some of these countries.

The platform’s focus on family-friendly content is likely serving it well, with so many children currently home from school. With its India launch coming soon as well, Disney+ could catch up to Netflix in terms of subscriber numbers pretty quickly.

If its streaming segment were the only consideration, there’s no doubt its share price performance would be higher today.

Sadly, other segments of Disney’s business have been hit hard by the pandemic. Some of its theme parks have been shut since January, its multiplex projectors have been closed down and its sports programming is struggling as major events are being cancelled.

With a recession on the horizon, fewer people are likely to participate in these experiences even after the dust of the pandemic has settled. Rick Munarriz, writing in the Motley Fool, believes it could take up to two years for Disney to get back on its feet.

The bright side? Disney is a responsible company acting fast to reduce damage to its business. The company raised a $6bn debt offering and its key executives have taken a pay cut — chairman Bob Iger has forgone his salary entirely. In addition, Disney is a valuable company with enduring brands, making it a good long-term play, especially at a discounted price. 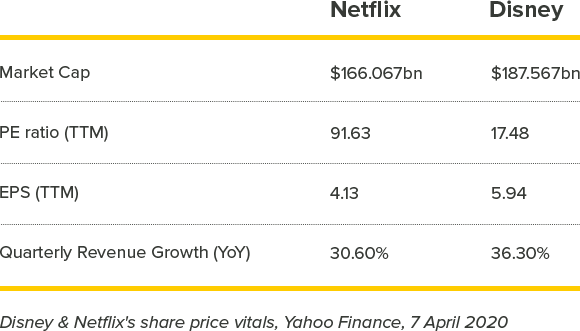 By the end of last year, Netflix reported $16.37bn in debt. This was dwarfed by Disney, which currently carries $51.93bn debt. However, a large part of this is a result of Disney’s recent acquisition of 20th Century Fox.

Morgan Stanley analyst Benjamin Swinburne reduced Disney’s share price target from $170 to $130 on 1 April but reaffirmed his overweight rating for the stock. On the same day, Bernstein analyst Todd Juenger upped his price target on Netflix from $423 to $487.