Traders use pips to measure price movements in forex trading. Determining the number of pips in a certain price movement is a straightforward process. Click to read more.

In trading, a 'pip' is a very small price movement. The term is short for ‘percentage in point’. A pip is essentially the smallest move that a currency could make in the forex market and it is an important unit of measurement in currency trading.

Traders use pips to measure price movements in currencies. Determining the number of pips in a certain price movement is a straight forward process, although it depends on the forex pair being traded.

What are 'pips' in forex trading?

You can trade on the forex market through financial instruments such as trading CFDs (contracts for difference). This involves opening positions based on the prediction that one currency will strengthen against another. For example, for every pip or point that a currency’s value varies, this will result in profits or losses for the trader, depending on the direction that the market heads.

To view an even tighter spread, currency pairs can be given in fractional pips, or ‘pipettes’, where the decimal place is at 5 places, or 3 places if dealing JPY. A pipette is therefore equal to one tenth of a pip. 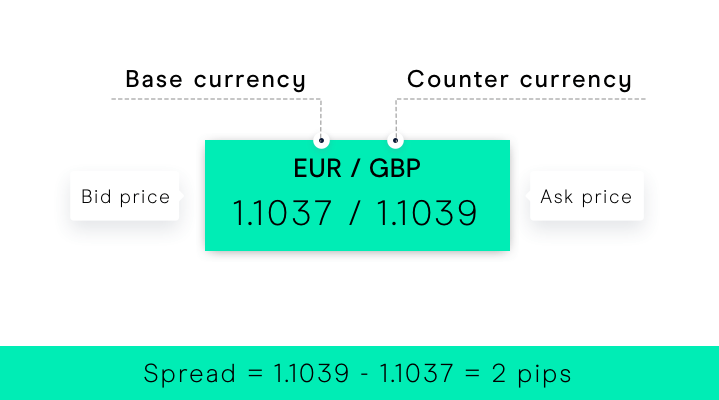 How to use pips in forex trading

If a trader enters a long position on GBP/USD at 1.5000 and it moves to 1.5040, the price has moved 40 pips in the trader’s favour, potentially leading to a profit if the trade is closed. On the other hand, if the trader goes long on GBP/USD at 1.5000 and the exchange rate falls to 1.4960, the price has moved 40 pips against the trader, potentially leading to a loss on the trade if it is closed.

As well as measuring price movements and profits and losses, pips are also useful for managing risk in forex trading and for calculating the appropriate amount of leverage to use. For example, a trader can use a stop-loss order to set the maximum amount he is willing to lose in terms of pips on a trade. Having a stop-loss in place will help to limit losses if the currency pair were to move in the wrong direction.

Pips can be used for the calculation of position size. If a trader’s combined position sizes are too large and they experience a number of losses, their capital could be wiped out. Therefore, trading with an appropriate position size is essential.

There are several steps involved in calculating position size:

How much profit or loss a pip of movement produces is dependent on the value of each pip. In order to learn how to work out pip value, we need to know the following three things: the currency pair being traded, the trade amount, and the spot price.

The formula to calculate the value of a pip for a four-decimal currency pair is:

How to calculate pips

What causes pip values to change?

The base value of a trader’s account will determine the pip value of many different currency pairs. For a USD-denominated account, which is common for the most traded currency pairs, if the currency pair has USD as the second (quote) currency, the pip value will always be $10 on a standard lot, $1 on a mini lot and $0.10 on a micro lot.

Pip values would only change if USD was either the first (base) currency in the currency pair, or not involved in the pair, and if the value of USD moved significantly by more than 10% in either direction.

In the forex market, traders use pips to measure price movements and profit and loss. Pips also play an important role in risk management. For example, a trader can identify a stop-loss for a trade in terms of pips, which can limit the potential losses on a losing trade. Pips can help forex traders to calculate the most appropriate position size in order to ensure that they are not taking excessive risks by opening positions that are too large with the potential for great losses.