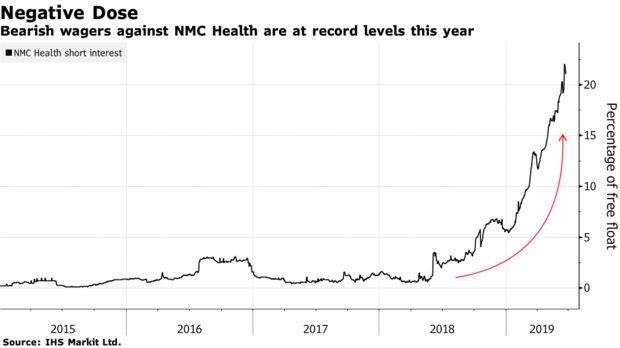 Bavaguthu Raghuram Shetty is having a bad year in the stock market.

Persian Gulf hospital operator NMC Health Plc, where he’s co-chairman and a major shareholder, has plunged as short sellers targeted the company amid concern its governance is lacking, it’s taken on too much debt for acquisitions and its accounting is too opaque. Shares of Finablr Plc, the payments processor he founded, are trading below their initial public offering price since the company listed in London last month.

The double whammy comes amid growing investor unease with indebted, acquisitive companies, in the case of NMC, and, for Finablr, mounting competition for financial services such as payments and currency exchange.

Bearish speculators had sold short a record 23% of NMC’s shares available for trading as of Monday, according to data compiled by IHS Markit Ltd. Abu Dhabi-based Shetty, along with former director Saeed Bin Butti and Vice Chairman Khalifa Bin Butti, collectively own more than half of NMC’s stock, according to the company’s annual report. The shares fell as much as 2.2% on Tuesday.

“What could be concerning investors is the company’s high leverage, government revenue exposure and potential performance of Saudi hospitals,” said Khaled Sadek, head of consumer and health-care research at CI Capital Holding. NMC’s management has addressed most of the issues on several occasions, and they’re already reflected in the share price, said the analyst, who has an overweight rating on the stock.

While Shetty keeps an eye on near-term movements in equity markets, the boards and management at both companies are focused on fundamentals to create long-term shareholder value, a spokesman for Shetty said in an emailed response to questions. Both NMC and Finablr are on a stronger footing than at any time in their history, he said.

Shetty, 76, a native of Karnataka state in southwest India, moved to Abu Dhabi in 1973 and founded NMC in 1975. It’s now the U.A.E’s biggest private health-care provider. Last year, he and his wife pledged to give the bulk of their wealth to philanthropic causes as part of the Giving Pledge initiative founded by Bill and Melinda Gates and Warren Buffett.

Shetty’s stakes in NMC and Finablr combined are worth about 1.6 billion pounds ($2 billion), according to regulatory disclosures.

NMC shares, which have advanced more than 1,000% since listing in 2012, have fallen 42% from the record close of 4,120 pence in August. Jefferies LLC analyst James Vane-Tempest downgraded his recommendation to underperform in November on increasing execution risks, rising receivables and corporate governance concerns such as insider ownership and management remuneration targets.

In a follow-up note last month, Vane-Tempest highlighted market concern about the possibility of margin calls if the share price declines further. Shetty has pledged 7 million NMC shares, equivalent to a 3.4% stake, as collateral against a loan, a May 2018 filing shows. Khalifa Bin Butti has also pledged NMC shares against loans, according to a December 2017 filing.

“Shetty feels that this is one of the biggest sources of misunderstanding, and hence misinformation, in the market today,” his spokesman said by email, adding that there haven’t been any margin calls to date and Shetty sees little risk of any occurring. “That being said, given the sharp focus investors have placed on pledging of shares by the Butti family, it would not be inconceivable to see at least a partial reduction in the near term in the number of shares pledged.”

The collar structure under which Shetty’s shares have been pledged doesn’t provide for any possibility of a margin call, the spokesman said.

As for rising receivables at NMC, It takes longer for invoices to be paid in the United Arab Emirates than in developed markets because NMC’s primary counterparties are insurance companies, often government backed, the spokesman said. The longer time to get paid is more than compensated for by higher margins, he said.

Vane-Tempest is the lone bear on the stock among analysts tracked by Bloomberg. Goldman Sachs Group Inc. analyst Harsh Mehta increased his price target on the stock this month, saying expanding capabilities and new markets will drive organic revenue growth of about 13% annually over the medium term.

The stock is an interesting play on the trend of increasing privatization of health care in the region, said Vijay Valecha, chief investment officer at Century Financial Consultancy LLC in Dubai, who has high-net-worth individuals from the gulf among his clients.

NMC has had average revenue growth of about 32% annually the past five years, more than triple the average for companies in the Stoxx 600 Health Care Index, yet the stock sells for 17.2 times estimated earnings, a discount to the multiple of 24.2 for the benchmark.

“The valuations of the company are typical of growth stocks and the company deserves a premium since there are not many companies in this region with this kind of growth,” Valecha said.

Meanwhile, Finablr shares are down 16% since they began trading in London on May 15. The company priced its IPO at 175 pence a share, compared with an original offer range of 210 pence to 260 pence. Shetty set up the firm last year to consolidate his financial services brands and the company handled more than 150 million transactions in 2018, according to its website.

Muted investor appetite can partly be attributed to its listing coming after two other payments companies, Nexi SpA and Network International Holdings Plc, which both went public in April.

Some good news for Shetty arrived Tuesday as Finablr shares rose as much as 6.1% in early trading after Goldman Sachs Group Inc. began coverage of the stock with a buy rating and JPMorgan Chase & Co. initiated with an overweight recommendation. Both firms were underwriters of the IPO.

“For investors to be interested in the stock, you need greater diversification of product and you need to see accelerating growth, and that’s difficult to see where that comes from at the moment,’’ said Neil Campling, an analyst at Mirabaud Securities Ltd. in London.

Finablr has “pretty slow growth” overall, especially compared to some other fintech companies, according to Campling. The company, which also owns currency exchange chain Travelex, is facing rising competition from firms such as London-based startup Revolut Ltd., he said.