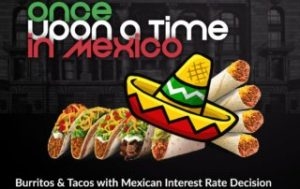 There might be nothing more attractive than Mexico in Latin America. It is the land where Antonio Banderas and Salma Hayek romanced in the iconic action movie ‘Desperado’. Well it is also famous or infamous for drugs (depending on your taste), Tequila, Burritos as well as Tacos. And it has a border where Trump wants to build the next ‘Great Wall of China’. Certainly not a place for the faint hearted.

Same is the case with investors and traders in the FX world. Mexican Peso, their currency, is for those people who get a high on seeing bullet ridden and blood spilling movies like “Kill Bill”. However this country cannot be ignored. It is the 15th largest economy of the world with a population of 127.5 million and a per-capita income of $8200. Certainly it is a key Latin American economic power.

A one off hike in petrol prices in January had propelled Inflation to a 16 year high in August, but since then Inflation has been trending down. A string of seven successive rate hikes from Bank of Mexico seems to have achieved its objective. A stronger Mexican Peso has helped to slow inflation to 6.53% in the first half of September.

Banxico (Bank of Mexico) forecasts also indicate that inflation might be finally easing. Their latest update showed a reduction in expected inflation to below 3% by 2018 year end. A consensus seems to be emerging in the Banxico board that inflation seems to have finally peaked and that it might come down from now onwards. Jump in fresh food prices might just be a temporary shock rather than a permanent feature.

Even though growth forecasts also have improved, other macro aspects are not that encouraging. Mexican consumer’s willingness or propensity to spend seems to have been hit by the lagging impact of seven rate hikes from Banxico. In other words, consumer spending seems to be losing steam. Wage pressure also seems to be minimal.

So what to expect?

The decline in inflation tells a story in itself. Bank of Mexico is going to stay still. Status Quo is the way forward and further rate hikes are clearly ruled out. Inflation above the target level of 3% means that there will not be rate cuts as well. So unlike the movie ‘Desperado’ no breath taking stunts are expected. Sometimes, even no action speaks a lot. Eventually this might lead to Peso weakening in the medium term against USD as the Fed seems to be on a rate hike path.