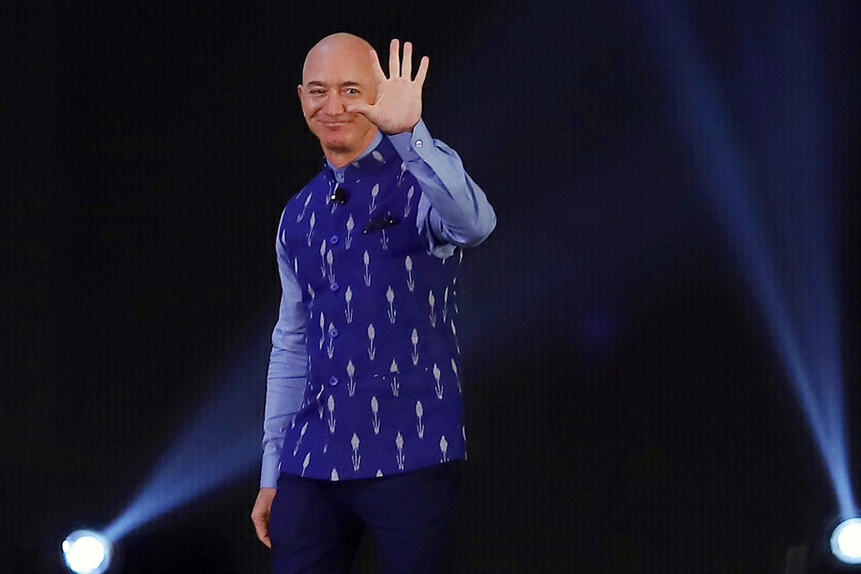 It hasn’t all been plain sailing, however. During the mid-March market sell-off, Amazon’s share price slid to $1,676, but it soon rallied as locked-down consumers ramped up online deliveries to keep them entertained at home.

Another area of the market that has seen a significant uptick in demand amid the coronavirus pandemic is food delivery. This means Amazon’s share price is likely to climb further, since the company was given the green light to buy a 16% stake in UK food delivery firm Deliveroo on 6 August.

Amazon’s share price rallied from $3,138.83 on 4 August to $3,225 on 6 August, after the UK’s competition watchdog the Competition and Markets Authority (CMA) finally gave the long-delayed investment its approval. 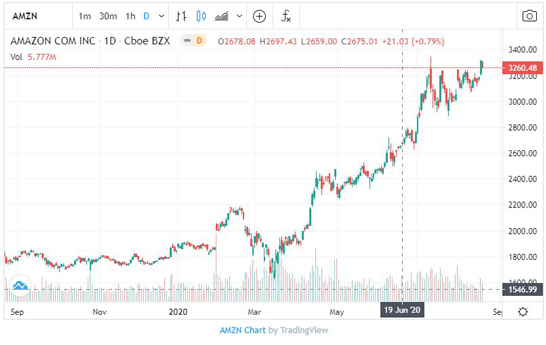 The deal was first announced in May 2019, when Deliveroo said the e-commerce giant was the lead investor in a $575m fundraising round.

This prompted the CMA to launch a formal probe into the deal towards the end of the year, concerned that it could prevent Amazon from re-entering the UK food delivery market under its own steam. There were also worries that the deal could lead to a hike in consumer prices.

“Amazon’s dominance of e-commerce and local delivery has never been greater, and vibrant competition in this market is more important than ever,” Alex Captain, founder and managing partner of Cat Rock Capital Management, said back in May this year. “We urge the CMA to fully consider the long-term implications of this transaction. UK consumers will lose if Amazon and Deliveroo do not independently compete.”

However, in its final decision, the CMA declared that the deal would not result in a substantial lessening of competition in either restaurant or convenience grocery delivery, saying: “We have not found this to be the case given the scale of Amazon’s current investment, but if it were to increase its shareholding in Deliveroo, that could trigger a further investigation.”

Russ Mould, investment director at AJ Bell, has said the approval will likely turn the stomachs of competitors such as Just Eat Takeaway [JET] and Uber [UBER]. “Typically, Amazon parking its tanks on the lawn in a market is bad news for the competition,” he said. “A key question to weigh is whether the impact of Covid-19 on the space will be short-lived or if it will be a lasting legacy of the pandemic.”

According to Market Screener, analysts have a consensus Buy rating for the stock and an average target of $3,668.59 for Amazon’s share price. Some go even further, including JMP Securities’ Ronald Josey, who has a price target of $4,075. Hitting this would see a healthy 23% upside on Amazon’s share price through 18 August’s close.

Brad Erickson, an analyst at Needham who has a $3,700 target, is hopeful Amazon will get the appetite for more deals. “Although not imminent, we think this increases the odds Amazon makes a similar investment in the U.S. at some point with DoorDash likely making the most sense,” he said.

Analysts believe the Deliveroo deal also fits nicely with the expansion of Amazon Fresh, which is now offering free online grocery deliveries to its Prime customers in London and the south-east, and eventually the rest of the UK.

Zacks analysts say that, along with continued global demand for Prime and Amazon Web Services, the strengthening of its smart home device Alexa's skills and growing efforts to tailor services for small and medium businesses is “likely to drive the company’s business in the near term”.

Daniel Sparks, writing in the Motley Fool, acknowledges that, with the e-commerce giant currently trading at around 120 times earnings, there will be inevitable questions around Amazon’s share price valuation. There may also be worries that its revenue growth is unlikely to increase as rapidly when people return to their normal lives.

However, he believes that the online retail giant has simply become too critical in the way people shop today for Amazon’s share price to notably suffer.

“COVID-19 likely accelerated the adoption of e-commerce by both third-party merchants and consumers, laying a foundation for continued strong growth in e-commerce for years to come,” he says. “There's still plenty of room for Amazon's sales to continue growing. After all, going into 2020, e-commerce penetration in the US was just 15%.”