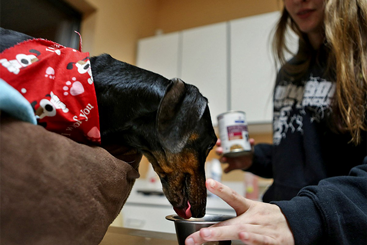 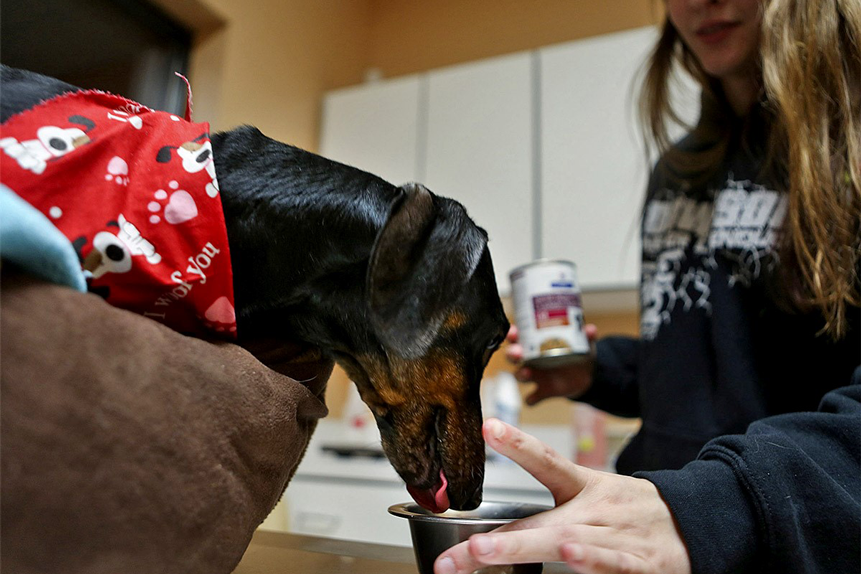 Chewy’s [CHWY] share price has gained an impressive 153% in the year-to-date (through 4 December’s close). With third-quarter earnings due to be announced on 8 December, investors will be hoping for market-beating results to maintain Chewy’s share price momentum into the festive season.

After opening at $29.00 in January, Chewy’s share price was initially clipped back by the March slump as the coronavirus pandemic set in. However, Chewy’s share price has rebounded since, rising from an intraday low of $20.62 on 12 March to values well above its previous all-time high of $41.34 set on 14 June 2019 – the day of its IPO – within weeks. 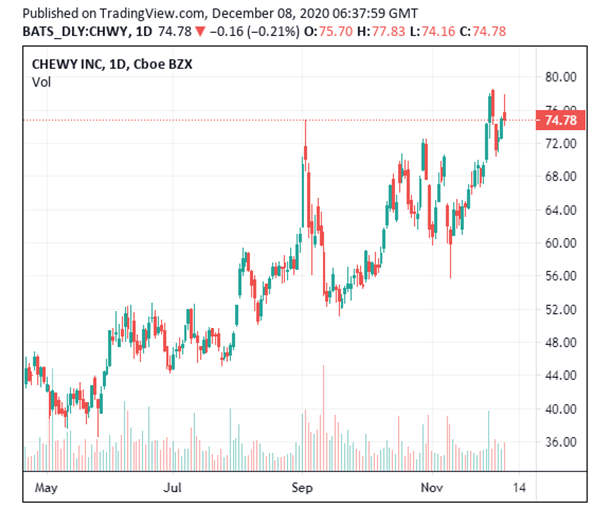 By mid-October, Chewy’s share price was trading comfortably above the $60 mark and by the Thanksgiving holiday, it leapt to a new all-time high of $74.47, closing at $74.25 on 27 November. This was in the run-up to the Black Friday weekend, which was set to deliver an online shopping bonanza, especially for pet suppliers.

Not just for Christmas

A report from Deloitte discovered that pet merchandise was set to be a top gift-giving category this year. A 4,000 person survey found that more than half plan to purchase pet food and other supplies at an average spend of $90, as gifts for their own or other people’s pets.

Chewy is also offering gift cards for the first time, in addition to personalised merchandise such as mugs, blankets and bandanas. In response to the news, Sumit Singh, Chewy CEO, said, “pet parents have more time”.

“When you have time and there are more people at home, pets are actually getting entertained and engaged more,” Singh continued.

Expectations for Chewy’s seasonal windfall were boosted further by a report from the National Retail Federation predicting holiday sales to increase between 3.6% and 5.2% this year thanks to reduced spending on things like travel as a result of the pandemic. While Black Friday activity won’t impact third-quarter revenue at all, it could add further momentum to Chewy’s share price rally if the holiday season is preceded by a strong set of financials.

Chewy’s strategy to date has been all about growth, with successive CEOs adopting a flywheel approach to growing the company’s market share at the expense of short-term profitability. According to analysts, this trend of ballooning sales without breaking even is set to continue for this quarter.

Zacks forecast $1.72bn revenue for the current quarter, an increase of 40.0% year-over-year and up 1.2% on last quarter’s reported $1.70bn. Chewy has a history of springing surprises, however, with the previous two quarters exceeding Zacks analysts’ expectations by 4.46% and 3.7%, so Zacks’ highest estimate of $1.74bn will be hoped for by some analysts. At the lower end, the $1.71bn estimate will still represent an increase over last quarter’s results.

Profitability, however, is set to remain elusive. Zacks forecast negative earnings of $0.15 per share for the quarter, a 25% increase year-over-year, but an 87.5% fall from last quarter’s loss of $0.08 per share. There is, however, significant variability in these figures. While the most pessimistic forecasters see Chewy losing $0.18 per share, the optimists put the figure at -$0.12, which would represent an improvement on the previous quarter.

According to Jeff Reeves of MarketWatch, Chewy’s growth strategy is working and the company currently holds circa 50% of the online pet product market. While some fear that positive vaccine trial data heralds the end of the pandemic that has driven Chewy’s share price rise, Reeves notes that Chewy’s online subscriber numbers were already up 41% year-over-year at the end of 2019. Thanks to its subscription format encouraging repeating supply orders, and the increase in pet ownership, Chewy’s increased revenue is likely to have considerable staying power.

The analyst community generally agrees that Chewy’s share price prospects look positive. A panel of 16 analysts polled by CNN Money yielded a Buy consensus, with 12 analysts offering that rating. The other four polled all rated the stock a Hold.