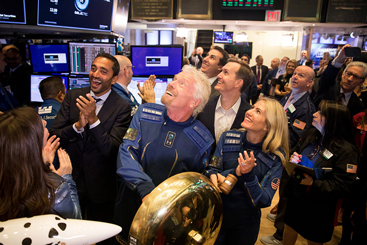 Has Virgin Galactic’s Share Price Got Space to Grow? 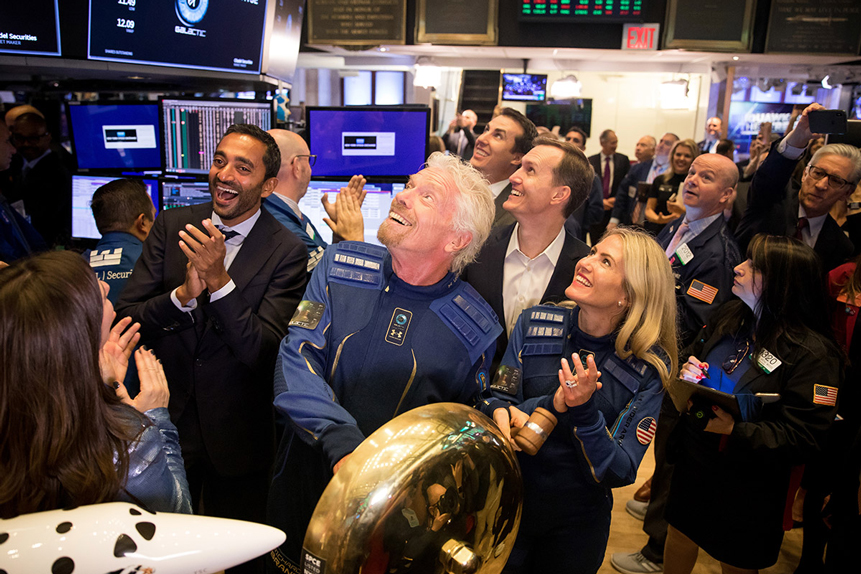 Virgin Galactic’s [SPCE] share price has gained 30.8% in the past 12 months to 23 February, boosted late in 2020 by its test flight programme returning to schedule and by NASA awarding the company a contract for flight and integration services.

Despite falling 8.2% on 12 February following a postponed test flight, Virgin Galactic’s share price has gained 86.1% through 2021 so far driven, in part, by activity from the Reddit users behind the GameStop [GME] short squeeze.

The company is due to announce fourth-quarter 2020 earnings after market close on 25 February. 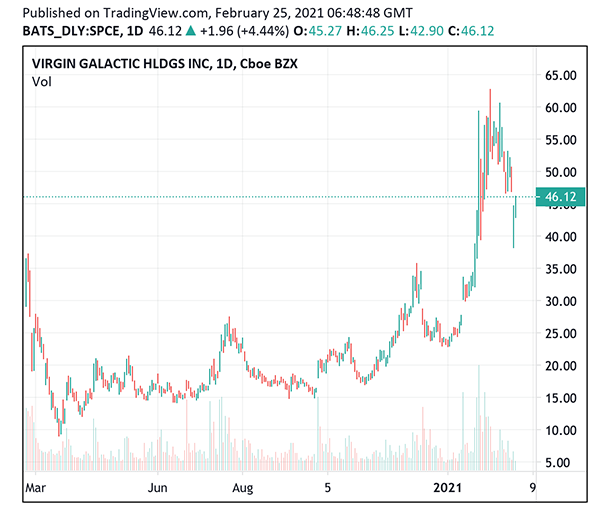 Morgan Stanley forecast that the space sector will generate more than $1trn by 2040 and, according to a recent Space Capital report, space companies received $25.6bn in investments during 2020.

While $8.9bn of this investment went to infrastructure companies, Virgin’s venture into space tourism is one of the most eye-catching names in the fledgeling industry and, consequentially, it is one of the most momentum-grabbing stocks in the space.

As commercial flights are yet to begin, Virgin Galactic will have nothing to report on the sales front. Investors will instead be looking for limited losses, especially since the last quarter’s earnings report announced losses of $0.34 per share, 25.9% more than analysts had estimated. The Zacks Equity Research consensus estimate for the current quarter is -$0.31 per share, an 8.8% improvement on the previous quarter and a 16.2% improvement on the equivalent figure from a year earlier.

At this stage, a disappointing earnings report won’t be disastrous for Virgin Galactic’s share price. Despite losses announced on 5 November coming in 25.9% greater than expected, Virgin Galactic’s share price fell only 0.7% on 6 November and closed the following Monday, 9 November, 6.7% above its 5 November close. If losses are less than forecast, the already stratospheric stock could reach new highs.

However, many investors will be wary of putting all their eggs in one basket, especially given the exploratory nature of the sector as a whole and space tourism’s relatively small position within the broader industry.

Virgin Galactic is not just light-years from generating profit, it has a long way to go before even generating revenue. Any future hiccups in its testing programme — such as its Unity spaceship’s rocket motor failing to ignite during a December test flight — could set the company’s share price back significantly.

Virgin Galactic can be found in the disruptive innovation section of Opto’s Global Thematic ETF Screener, forming 1.82% of the ARK Autonomous Technology and Robotics ETF [ARKQ] and 1.96% of the Direxion Moonshot Innovators ETF [MOON], but it is understandably more prominent in space-specific ETFs.

Virgin Galactic is the largest holding (as of 23 February) in the SPDR S&P Kensho Final Frontiers ETF [ROKT], weighing in at 5.93% of the fund’s value.

The fund tracks an index of companies “driving innovation behind the exploration of outer space and deep sea”, and has grown 5.2% in the last 12 months.

Virgin Galactic is also the fourth-largest holding of the Procure Space ETF [UFO], constituting 5.64% of the fund’s value (as of 24 February). This fund invests 80% of its resources in companies generating “at least 50% of their revenue or profits from one or more segments of the space industry”, and has climbed 8.4% in the past 12 months, and 16.1% since the start of 2021.

Despite five of nine analysts polled by CNN Money recommending to buy the stock, with the other four giving a hold rating, the median estimate among nine analysts offering 12-month price forecasts for Virgin Galactic is $32 (27.5% below its closing price on 23 February) — indicating that most analysts feel the stock is currently overvalued.

Earlier in February, UBS downgraded the stock to neutral. However, the favourable ratings compared to price forecasts are an indication that Virgin Galactic’s investors could expect returns further ahead, into 2022 and beyond — especially given how early the business is in its development.