How is AMD’s Stock Price Reacting to the Semiconductor Shortage? 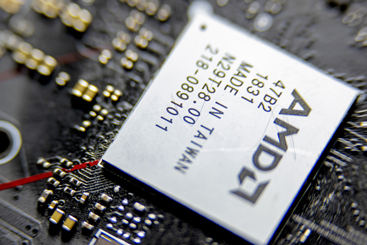 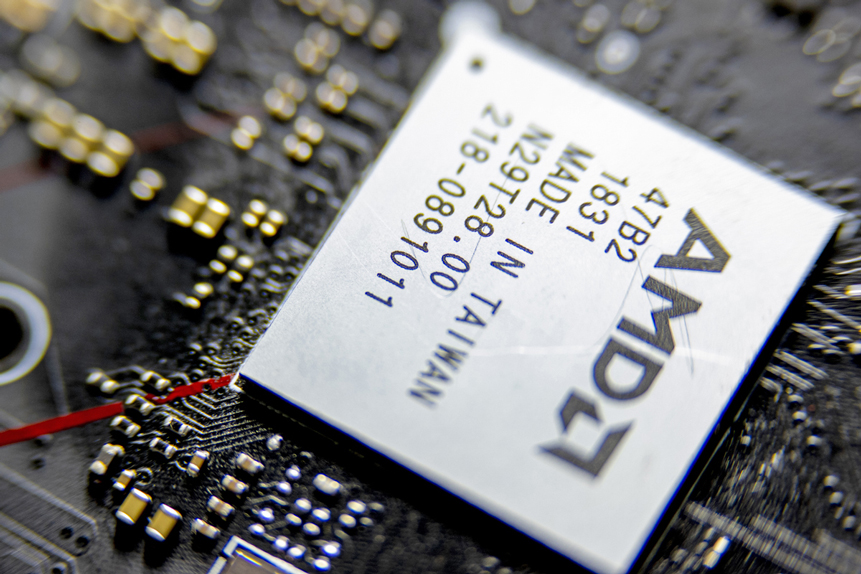 AMD’s [AMD] share price is trading just below its 52-week high of $99.23 hit on 11 January, closing 16 February at $92.01. After making a slow recovery from its March lows, the stock enjoyed a strong rally in June and July. Since then, it has been something of a volatile ride for AMD’s share price and the semiconductor theme more widely.

A shortage of semiconductors is also having a major effect on the companies and industries which rely on the chips. The pandemic has fuelled unprecedented sales of electronic products, resulting in extraordinarily high demand for chips, but there are other factors at play exacerbating the chip shortage. There is a distinct lack of factories actually producing the chips, plus restrictions on a key Chinese chip manufacturer, as a consequence of the US-China trade war. 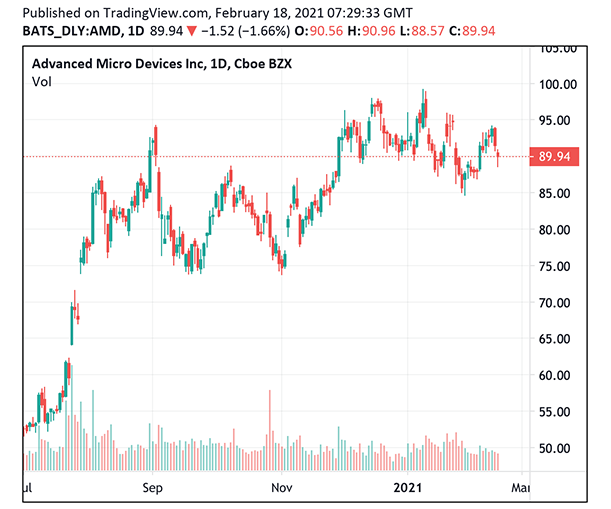 COVID-19 has clearly changed many facets of normal life, and one of these has been the huge numbers of people working and learning from home around the world. This has helped fuel overwhelming demand for chip-heavy products like PCs, monitors, TVs, games consoles, smartphones and tablets. The US Consumer Tech Association confirmed 2020 was its biggest-ever year of revenue, at $442bn, while it was also the highest annual growth in the PC market in 10 years, reported CNBC’s Kif Leswing.

The shortage of chips has been underscored by a structural change in the semiconductor industry – “many of the top semiconductor companies are now ‘fabless’, which means they only design the chips and the technology in them”, says Leswing. Other companies are then contracted to manufacture the chips (known as “foundries”), and those firms are currently at maximum capacity.

US restrictions on China’s biggest foundry, Semiconductor Manufacturing International [688981], is another issue affecting the production of semiconductor chips. The firm has been banned from access to advanced chip manufacturing equipment, and faces added complexity in selling to companies with US connections, report CNBC.

How is the semiconductor shortage affecting other sectors?

Cars now include myriad chips, used in a number of functions, such as power steering and infotainment systems. The chip shortage has led to a growing number of major automakers, including General Motors [GM], Ford [F], Honda [7267] and Fiat Chrysler, being forced to slow production, reports CNBC. Gartner semiconductor analyst, Gaurav Gupta, summed up the issue, saying “the problem is even if that 10-cent chip is missing, you can’t sell your $30,000 car.”

Outside of the auto sector, Sony [6758] has blamed the PlayStation 5 game console shotage on the lack of chips. The situation is unlikely to improve in the near term, with AMD CEO, Lisa Su, suggesting shortages could last into the second half of 2021. AMD makes the processor for Sony and Microsoft [MSFT] consoles.

Despite reporting a record quarter at the end of January, which topped $100bn in revenue for the first time, Apple [AAPL] said it didn’t have enough supply of its new iPhones to meet demand, with CEO Tim Cook confirming that “semiconductors are very tight.”

Despite the chip shortage having a significant effect across sectors, the sheer level of demand for products containing semiconductors is reflected in AMD’s recent stellar results, released on 26 January. The chipmaker unveiled its Q4 revenue jumped 53% year-on-year to $3.24bn, with full-year revenue at $9.76bn, up 45% on the prior year. EPS also proved a beat versus analysts’ estimates, coming in at $0.52 against expectations of $0.47.

AMD also announced “the world’s best processors for laptops”, in the shape of the AMD Ryzen 5000 Series Mobile Processors, bringing AMD’s super-efficient, powerful core architecture to the laptop market. With laptops now playing a bigger role in how we work and connect as a result of the pandemic, this development should provide an additional revenue boost.

The 29 analysts offering 12-month price forecasts for AMD’s share price have an average target of $102.03, with a high estimate of $135.00 and a low estimate of $17.00, according to CNNMonday and the Wall Street Journal. The average estimate represents a 10.89% increase from Tuesday's closing price of $92.01.

AMD currently has 17 buy ratings, with two overweight, 13 hold, one underweight and two sell ratings, for a consensus overweight rating.

AMD’s share price is outperforming despite the chip shortage so, once that issue is resolved, sales and revenue should benefit. With analysts’ generally bullish on the stock, AMD’s share price could test new highs sooner rather than later.