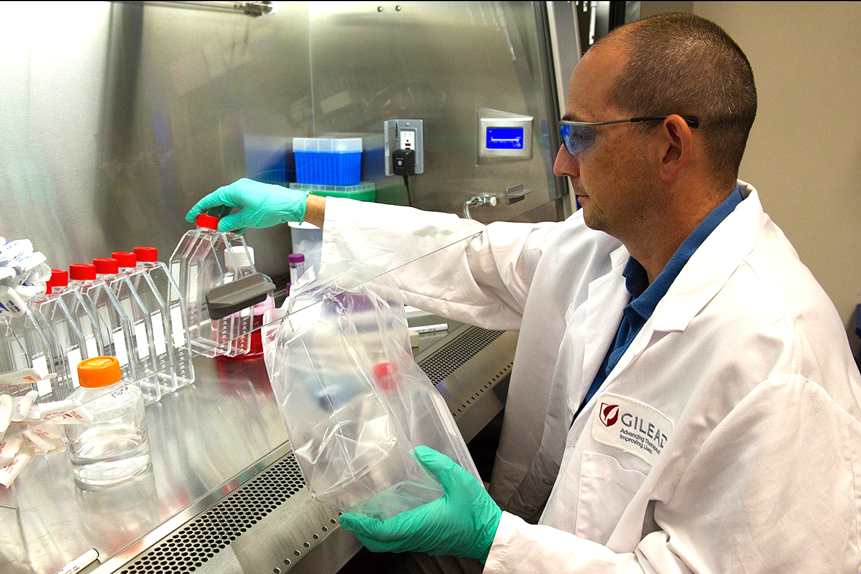 The performance behind Gilead Sciences’ [GILD] share price has mostly been driven by one thing over the last six months – its COVID-19 drug, Remdesivir.

Since reaching that intraday high, shares in the US drugmaker continued to climb – the stock closed at a high of $83.20 on 30 April. Gilead’s share price has since fallen 21% through 14 September, but it is still trading 8.95% above its 52-week low of $60.89, which it hit back in October last year.

As the first biotech company to have its experimental COVID-19 treatment granted emergency use authorisation by the Food and Drug Administration (FDA) in May, what kind of trajectory has that put Gilead’s share price on? 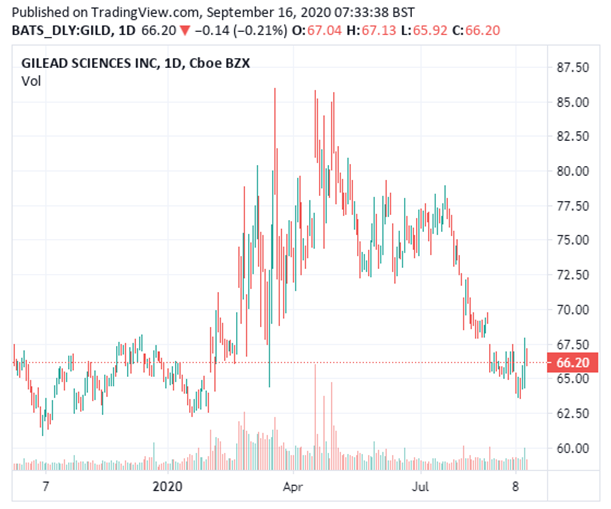 Tracking the ups and downs of Gilead’s Remdesivir

Early on in the coronavirus pandemic, there was a lot of fervour around Gilead’s Remdesivir drug and the potential for it to be used to treat patients who had contracted COVID-19.

When Gilead reported early positive data from preliminary results of its Remdesivir drug on 29 April, its stock jumped nearly 6% during intraday trading before closing the day up just 0.3%.

Given the trial-and-error nature of the pharmaceutical industry, it should come as no surprise that Gilead’s share price also fell 2% on 2 June following the announcement of slightly disappointing results from its phase 3 trial – the drug only showed a limited benefit in a large sample.

With early promises fading, Gilead’s share price has fallen 21% since the end of April and just over 11.73% since the beginning of June.

At the end of June, the Trump administration bought up most of the global supply of Remdesivir, but the stock hardly moved in reaction to the news.

This is most likely because the price of the drug will be unaffordable for many. A six-day course of the treatment will cost $2,340 per patient in all developed countries except the US, where hospitals will be charged roughly $3,120.

David Jagielski, writing in the Motley Fool, believes it’s hard to be optimistic about the drug's effectiveness without much in the way of positive results over the past few months. “And with uninspiring results thus far, it may be difficult to convince patients and health officials that the drug is worth its price tag.”

If there is a silver lining, it’s that Gilead’s Remdesivir was approved by the FDA for its use in moderate cases of the novel coronavirus on 28 August. Prior to the decision, Gilead had only been issued with temporary approval, which had limited the scope of its usage.

While this is no doubt good news, it might not be enough to drive growth in the near-term. This is partly because of the impact COVID-19 has had on the number of hospital visits and patients starting, continuing and accessing treatments.

It also hasn’t helped that another of Gilead’s applications to the FDA, for the use of Filgotinib in treating rheumatoid arthritis, was rejected on 18 August. The FDA has requested more data and the decision means it’s unlikely the company will be able refile until the middle of next year.

Geoff Meacham, Bank of America Securities analyst, wrote in a note to clients that Filgotinib may not be considered a key contributor to the company’s profit and losses, but it was still expected to fetch $470m in sales in 2022. This now looks very unlikely.

“But with US approval now delayed … and additional potential commercial headwinds, we continue to be cautious,” Meacham wrote, as reported by Benzinga.

Looking to the long term, though, Gilead’s share price will arguably be sheltered by its diverse portfolio. Its HIV drugs and treatment for HCV (hepatitis C) are proven successes.

For the three months to the end of June, the company saw revenue of $5.1bn, down nearly 10% on the $5.7bn posted in the second quarter of the previous fiscal year. HIV drug sales for the quarter were down just 1% year-over-year at $4bn, but they were up 6% for the first half of the fiscal year.

Total HCV revenue was $448m, a decrease of 47% year-over-year, while HCV sales were $1.2bn for the first half of the year, a fall of 28% year-over-year. Lower figures compared to the same quarter in 2019 were attributed to fewer doctor appointments and related screenings.

As pandemic-related delays to treatment and hospital visitations subside year-over-year sales in the quarters ahead, and Gilead’s share price by extension, should rise again. The continued cash generation by its HIV and HCV segments should boost investors’ confidence in the pharmaceutical firm.

MarketBeat data shows there are currently 27 Wall Street ratings for Gilead’s share price, with a majority rating it a Hold. Just two of them are a Sell, 16 a Hold and nine a Buy.