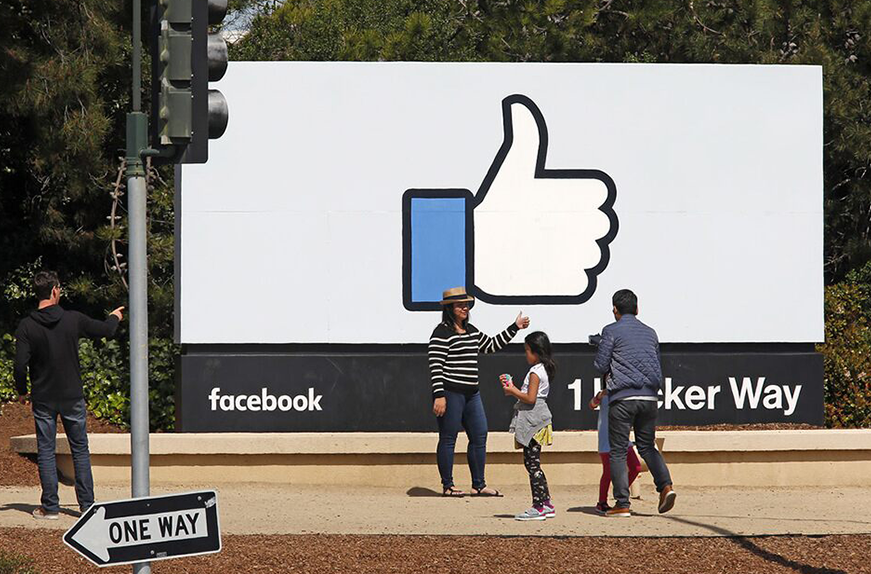 The social media sector has seen rapidly increasing popularity amongst investors recently, and this trend is encapsulated in our Thematic ETF Screener. The screener currently ranks the social media screener in third place for the month, with 14.39% growth (as of 10 February).

As an investment theme, social media is represented by the Global X Social Media Index ETF [SOCL], which consists of 38 individual social media stocks. The ETF has risen impressively since the 52-week low of $24.57 last March, climbing 201.3% to $74.03, just a whisker off its all-time high (as of 9 February’s close). 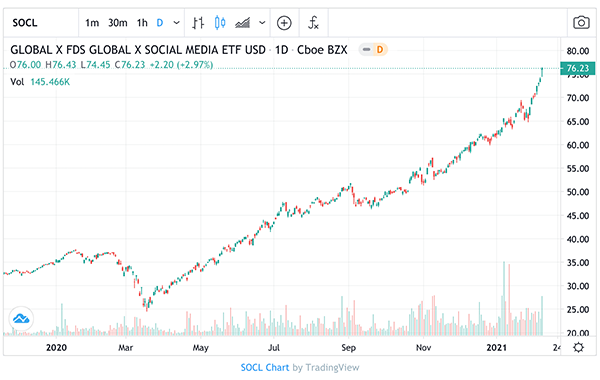 California-based Snap, best known for its Snapchat app, currently has the largest weighting in the Global X Social Media Index ETF at 10.68%. Snap’s share price has climbed steadily since its 52-week low of $7.89 on 18 March last year, soaring 716.73% to reaching an all-time high of $64.44 in intraday trading just last Friday, following the release of largely encouraging Q4 results a day before. Snap’s share price closed last week at $63.64, jumping 12.85% on Friday alone.

While yet to deliver a net profit, Snap’s numbers are moving in the right direction. Snap beat Q4 estimates on revenue ($911.3m vs $856.1m), EPS ($0.09 vs $0.07) and daily active users (265 million vs 257.9 million), boosted by advertisers who, Yahoo Finance’s Emily McCormick says, “stepped up spending after pulling back during the worst points of the pandemic last year”.

CEO Evan Spiegel offered a bullish outlook: “we delivered our first full year of adjusted EBITDA profitability and, as we look towards the future, we’re excited to build on our investments in augmented reality, mapping, and content to drive our ongoing growth.”

Despite an average price target of $59.33, which represents a 6.97% drop versus Monday’s close at $63.78, Snap currently has an overweight consensus among analysts covering the stock, with 24 buy, one overweight, nine hold and four sell ratings, according to the Wall Street Journal.

Tencent has a 9.14% weighting in the social media ETF, making the Chinese tech conglomerate the second largest constituent. Tencent's share price has continued to push higher, gaining 84.85% over the last year to HKD740.50 at Tuesday’s close.

The WeChat owner’s stock has recovered after a pullback from its all-time high of HKD767.50 achieved on 25 January, and now sits just 3.65% shy of that level (as of 9 February’s close).

The social media behemoth has the third-largest weighting in the Global X Social Media Index ETF at 7.00%, in what has been a relatively volatile year for Facebook’s share price. The shares have gained 26.5% over the last year, but slipped 13.07% since hitting an all-time high of $304.67 last August (as of 8 February’s close).

The social media giant revealed stellar numbers in its latest earnings announcement on 27 January, with EPS of $3.88 well ahead of the expected $3.54, on revenue of $28bn, which also comfortably beat estimates at $26.41bn. Ad revenue was up, along with better-than-expected increases in daily and monthly active users.

Looking to the future, there are high hopes for Facebook’s venture capital (VC) arm, launched last year under the guise of the social network’s new product experimentation team. Wedbush analyst Michael Pachter says a specialist VC area offers “a first look at a bunch of new cool technologies … Facebook can afford to put $1m into 1,000 different things and if five work, they are golden.”

Facebook’s average price target of $338.93 represents a 27.14% jump from Monday’s close, and is backed by 39 buy ratings, with four overweight, five hold and just two sell ratings from analysts covering the stock with The WSJ.

Contrary to that optimism, Facebook revealed it’s wary of an “evolving regulatory landscape”, and CMC Markets’ chief market analyst Michael Hewson offers a note of caution. Hewson suggests that the sector “is likely to be clouded in uncertainty until we get some clarity from the new US administration on what regulation might look like”, adding that “the next few months are likely to be crucial in the lifecycle of social media companies, and Facebook and Twitter in particular.”

While the recent performance in our tracked social media ETF has been impressive, and its biggest components continue to beat on expectations, it would be wise to watch the rhetoric coming from the White House in the months ahead.