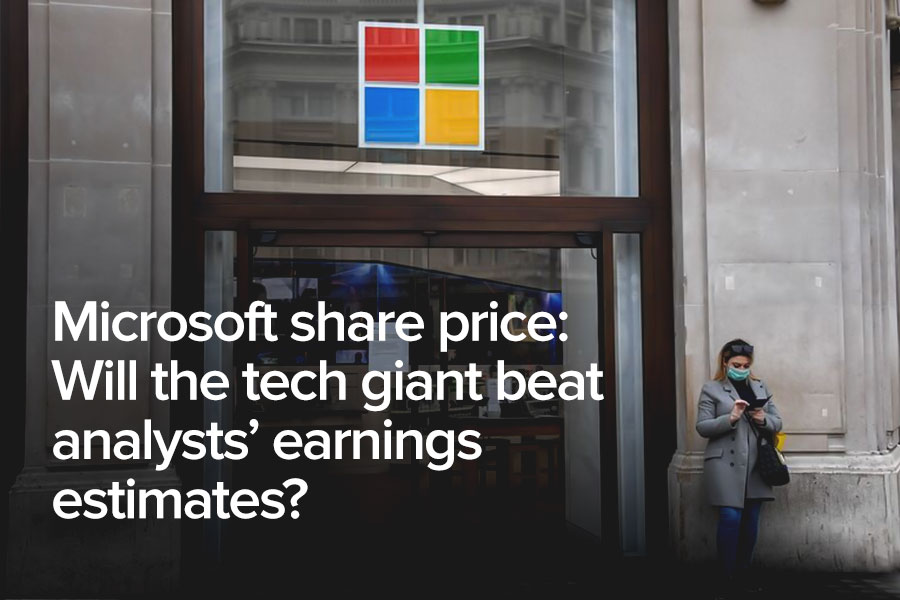 Microsoft’s share price, and its cloud services, have benefitted from the recent shift to working-from-home. Does this mean it’s set for an earnings beat?

Despite the uncertainties caused by the COVID-19 pandemic, Microsoft’s [MSFT] share price is buoyant, currently up 8.1% since the start of the year up to 27 April. While the S&P 500 has fallen by around 10.8% over that same period, Microsoft remains priced at the level it was at before the market sell-off began in mid-March, where its share price temporarily dropped to its lowest price since last August. 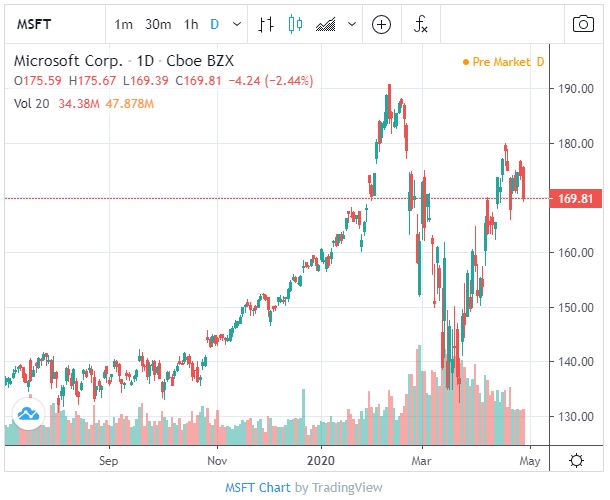 The fact the company’s share price has been performing better than the broader market is largely thanks to its software-as-a-service (SaaS) offerings and workforce collaboration tools such as Microsoft Teams. These have been in high demand as companies have been forced to pivot to working remotely. At the end of March, the company revealed that it had seen a 775% increase in Teams’ usage in a one-month period in Italy alone.

In a March note to clients, Daniel Ives, managing director of equity research at Wedbush Securities, said that cloud computing is one of the tech themes that investors should put money into to get to “the other side of the dark valley”. He identified Microsoft’s share price as one of the large cap-names to keep an eye on.

“This current remote work from home environment is further catalyzing more enterprises to make the strategic cloud shift, with Microsoft the main beneficiary,” he added.

Microsoft’s cloud business seems to be benefiting from this period of economic instability, but what does this mean for the upcoming earnings call for its fiscal year Q3, and the possibility of a post-earnings share price bounce?

Regarding earnings per share, analysts expect EPS to be $1.29 when Microsoft reports on 29 April, which would mark a 13% year-on-year increase on $1.14 EPS. In the previous quarter, EPS was $1.51, beating analysts’ estimate of $1.32 per share by 14%. The company is well placed to beat estimates again and, if it does so, it will be the 16th successive quarter that it has posted an EPS surprise.

As for total revenue, Microsoft is forecasting between $34.1bn and $34.96bn, which would be a year-over-year increase of between 11.54% and 14.36%. According to Yahoo Finance, this would put revenue towards the high end of analysts’ expectations, which range from $32.75bn to $34.76bn, with the average estimate being $33.9bn. A boon then for Microsoft’s share price investors?

It would seem so. Microsoft also expects healthy revenue for its productivity and business processes segment to be between $11.5bn and $11.7bn, while intelligent cloud revenue should be between $11.85bn and $12.05bn.

An area of concern, though, is Microsoft’s More Personal Computing segment. In an update on its guidance released in February, the company warned that it no longer expected to meet the target for its More Personal Computing segment, which includes Windows and Surface products, as well as revenue raised from selling commercial licenses. The company had expected to see revenue of between $10.75bn and $11.15bn.

“Although we see strong Windows demand in line with our expectations, the supply chain is returning to normal operations at a slower pace than anticipated at the time of our Q2 earnings call,” read a company statement.

“As a result, for the third quarter of fiscal year 2020, we do not expect to meet [the] segment guidance as Windows OEM and Surface are more negatively impacted than previously anticipated.”

More Personal Computing is arguably Microsoft’s most important and profitable segment. In the previous quarter, it generated $13.2bn in revenues, accounting for 36% of Microsoft’s total $36.9bn revenue. Productivity and business processes revenue was $11.8bn and intelligent cloud revenue was $11.9bn.

Despite the fact that it will miss its own guidance for the segment, there’s a sense of optimism among analysts. The general consensus is that Microsoft will beat estimates and a number of analysts have recently revised their recommendations upwards. The share price’s all-time high closing level was $188.70 on 10 February.

Of 33 analysts that have issued Microsoft’s share price a rating in the last 30 days, an overwhelming majority of 31 have assigned Microsoft a buy rating, according to MarketBeat. One analyst assigned it a hold rating, while the other assigned it a strong buy rating. The consensus price target is currently $183.60.