As Chris Rock once said, “You do not pay taxes, they take taxes.”

The growth trend of an economy largely depends upon the robustness of the formulation and implementation of its fiscal and monetary policies. Choices form decisions which lead to the creation of systems and plans. A right system can feed the millions, enlighten the dark and stimulate zeal for survival. However, a wrong one not only affects the present but the future of civilization.

Last week, Donald Trump’s administration signed up on a policy which will impose a tariff of 25% on imported steel and 10% on aluminum which comes across the US borders. As much the cited reason behind this presidential nonsense is to return America at its highest glory, this protectionist move has marked a question on global trade. A Tariff is nothing but another form of tax which is borne by the individual, not by the businesses. The blonde administration imposed these taxes with the aim of stopping the other countries to dump their extra metal on the US. Also, the current initiative pledges to reinforce the national security and American production against international competition.

Trump’s fellow Republicans are stunned, and so is the Department of Defense who recently reported that metals like steel and aluminum are not a threat to national security. America imports almost 90% of its Aluminium and one-third of its steel. However, it is still suspense to what category of steel the tariff will apply. Will it be on polished steel or semi-finished steel products used in heavy product machinery or concrete reinforcing bars? Canada is the most extensive exporter of steel, followed by Brazil and South Korea. Trump’s administration has spared Canada and Mexico at present, but their status dangles around stalled NAFTA (North American Free Trade Agreement) negotiations. 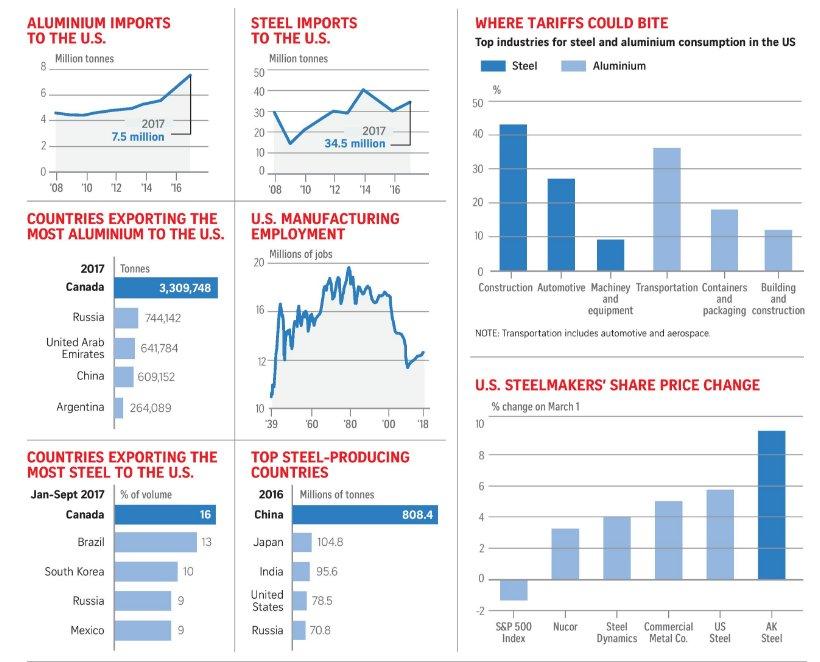 I am sure now that the White House is led by a blonde bully, whose lack of judgment will lead to the commencement of a trade war. The EU (European Union) already plans to retaliate by hitting back with tariffs on Harley Davidson, Levis and Kentucky Bourbon. These are the items from the regions where Republicans have significant political support. If Trump is using his tariff gambit as a bargaining chip to hindered NAFA negotiations, then he is playing a blind hand.

China is the fourth largest source of foreign Aluminium for America. As far as the steel imports are concerned, China accounted for only 2.5% last year. China has also warned to join the trade war, but there was no extreme reaction by them last Thursday when the tariffs were confirmed. The duties on Steel and Aluminium will not affect China much which is the reason why China is happy to let the other countries fight for them. So, the tariff trauma is doing much harm to the closest allies of America.

This whole agenda of “America First” is turning out to be deceit because the effect on domestic companies may not be as fruitful as planned. For instance, Alcoa, one of the largest producer of aluminum has smelters both in Canada and America, so it condemned the measures. To a greater extent, Trump’s administration has ditched him for this destructive move. All the adults from White House have walked out. The latest addition to the list was Gary Cohn, Chief Economic Advisor of White House.

Donald Trump is close to erasing profits which he aimed to generate when he introduced the massive $1.4 trillion tax cut plan in December 2017 (which also he did without any consultation whatsoever). His is losing allies and his administration in this Trade War. He might kiss his voters goodbye because these tariffs will produce an opposite effect to some of the most critical agendas which Trump promised during his Presidential campaign. Let us look what Trump administration promised and what they might deliver. 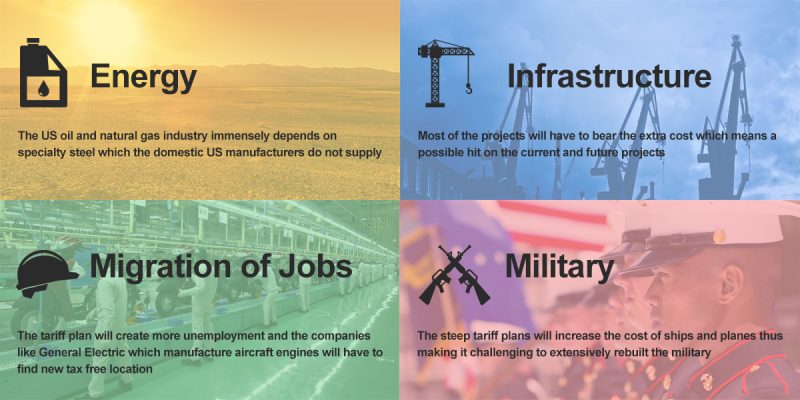 It is confounding that Americans have never understood the benefits of free trade in spite of the historical experiences. During the Great Depression in the USA between 1929-1932 when Congress dramatically increased tariffs on around 20,000 products, it did not only dug them further into depression but gave rise to monocratic economies in Germany and Japan which lead to the second World War. In 2002, George Bush tried to pull off the same stunt on and had to reverse its decision because EU and the other counties retaliated. In 2009, Barack Obama applied similar protectionist measures on Chinese tires and in return China retaliated by putting heavy penalties on US chicken parts which cost $1 Billion to US administration.

While the new trade policy can be a dawn of protectionist era for America, it is still unclear what the mad king wants. As of now, he is armoring for a war with his allies which when begins he will not be able to skedaddle.