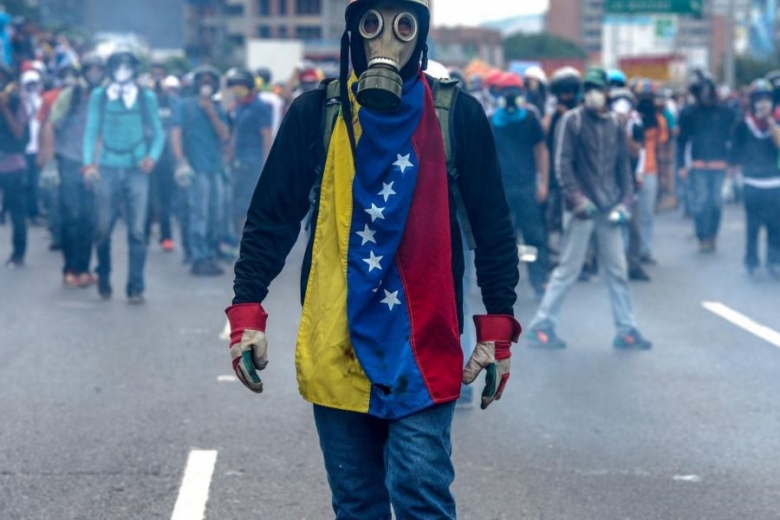 Before we enter into the next year like a charging bull, let us take a moment to talk about Venezuela- the South American country which was once, the richest nation in Latin America due to its vast availability of natural resources. The place which nobody speaks about, not sure if anyone cares about either.

Venezuela is an unfortunate child of bad decisions, poor leadership, and high corruption. In spite of having great weather, rich culture and abundance of mineral resources- 90% of people in Venezuela live in poverty. There is hyperinflation in the economy which has reached 1 Million percent and is projected to reach 10 million percent by 2019. This is the result of the failed economic policies by President Nicolas Maduro. And this is not the first time Venezuela has been sentenced to hell by its President. It was Hugo Chavez who manifested Maduro and continued the disastrous legacy.

Venezuela is into countless debt. Their sovereign bonds have defaulted since August, and Maduro’s government has missed two interest payments along with the principal. The overall value of pending interest and principal amounts to $65 billion. The creditors have started filing lawsuits over the Venezuelan government. A Florida firm has sued Venezuela for $34 million (26.85 million pounds) for defaulting on bonds. A group of five investment firms owns about $380 million worth of the sovereign debt that has been in default since January, according to S&P Global Ratings.
Apart from countless debt, the OPEC member is not digging its oil wells as much as they used to do. The total oil production has declined from 3.2 million bpd to 1.34 million bpd, declined by 75%. It is a big hit on a nation whose 98% export revenue comes from oil. Venezuela has never concentrated on any of its other mineral resources other than crude oil. That is why the higher oil prices kept 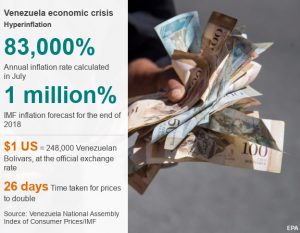 Venezuelan economy growing until corroded by corruption within the administration. Around 3 million people have already migrated to nearby countries like Brazil, Columbia, Trinidad and Tobago. 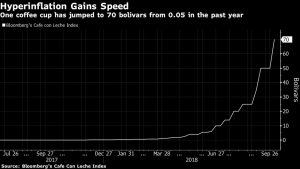 Trinidad has recently been facing the problem of illegal migration from Venezuelans, who enter legally as a tourist but stay more than their statutory duration. As a result, the authorities in Trinidad are now forced to adapt hard measures. They have ignored petitions of about 10,000 refugees and have been deporting Venezuelans who seek asylum status.

Venezuela has more oil reserves than Saudi Arabia or any other country, plenty of water reserves but no water to drink. Robberies are common, and the quality of life is worse than death. Due to the sanctions put by the US administration, the world has adjusted living with Venezuelan imports, and the market has adjusted the demand and supply. Any oil deals they do are cash-based and is used in payments of the loans. Venezuela is buried under a massive Russian debt mountain. Maduro did announce a $6 billion in Russian oil and gold mining investments, but we know what happens next. Are Russians being allowed to form the military base in Venezuela?

A country with such a rich culture is being sentenced to hell. Why? The answer is President Nicholas Maduro. The corrupted Chavismo era never ended with the death of former President Hugo Chavez. It only went worse when Maduro was elected. And as long he remains in power, there will be no investment from the international companies who are willing to come back to Venezuela. And since the need for Venezuelan resources to the world is literally minimal, the sole holder of the baton of justice- United States of America also continues to disavow any actions.
The people living in Venezuela and outside it still have hope for their country. They believe that there is a future beyond Maduro’s disastrous regime. They believe in the formation of the same Venezuela, which was once the jewel of Latin America. I wish Venezuela and the readers of the Brainy Bull a merry Christmas and hopefully a great year ahead.