Why Apple, Tesla and Zoom’s share prices could continue to lead in H2 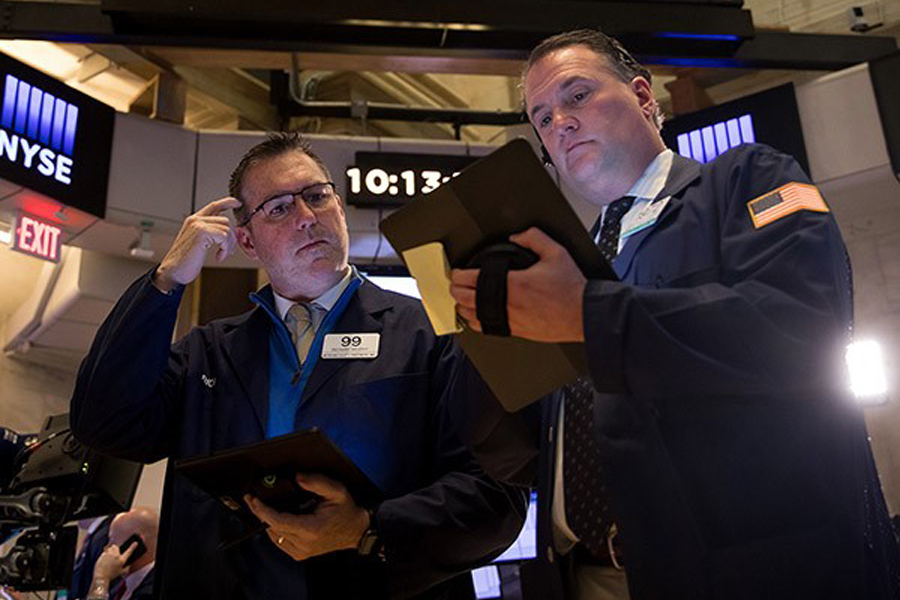 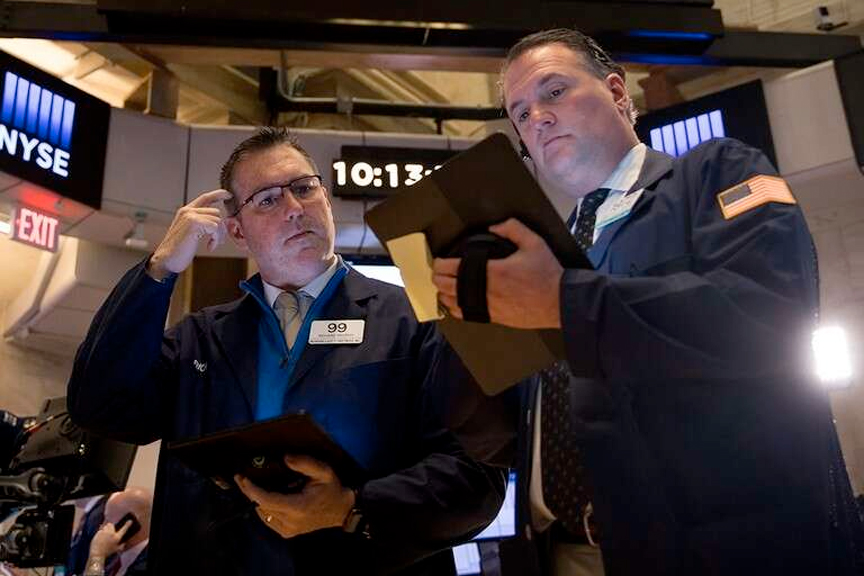 As the second quarter of 2020 came to a close, it was Apple [AAPL], Tesla [TSLA] and Zoom Video Communications’ [ZM] share prices that stood out as some of the best performers in US markets.

Tesla’s share price accelerated through the first half of 2020, rising 158% in the first six months of the year. Shares in the electric car company more than doubled in the second quarter, from $524 to $1,079, and this 106% increase made it the top-performing stock on the Nasdaq-100.

Zoom’s share price, meanwhile, was the best performing stock on the Nasdaq-100 for the first half of the year, climbing an incredible 272% to end the half at $253. It rose 73% in the second quarter which, while still impressive, represents a slowdown from the first quarter’s 114% rise.

Apple’s share price led the Dow Jones Industrial Average in the second quarter, gaining 43% to close at $346 on 30 June. This rise saw the stock largely recover from its 13% drop in the first quarter.

These three stocks posted growth in the first six months, but many others did not.

Only 135 of S&P 500 companies saw their share prices increase for the first half overall compared to the 451 stocks that rose in the second quarter, according to MarketWatch.

As society and the economy slowly find a new normal, the markets have begun to stabilise. Will the first half’s winners maintain their form for the rest of the year?

“With electric vehicle penetration shy of 1% in the US and roughly 2% globally, there's clearly more to go for,” he wrote in a recent article. 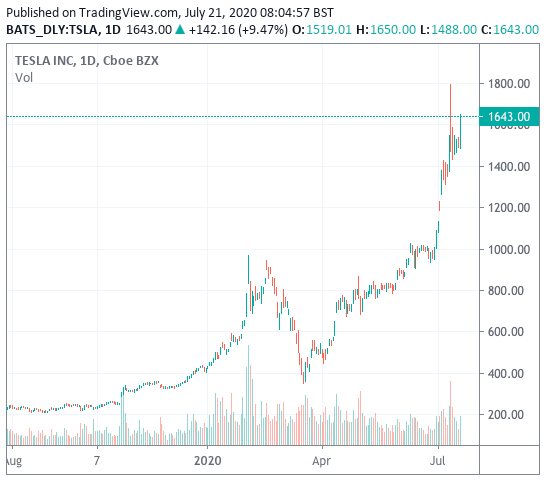 Dan Ives, analyst at Wedbush, also sees a “bull-case scenario” for Tesla’s stock according to MarketWatch.He has a price target of $1,250 but expects the stock to reach as high as $2,000.

That said, he warns that some long-term concerns remain, chiefly around profits in China, poor fundamentals for the auto industry, and the “inevitable” competition in electric and autonomous vehicles from Amazon [AMZN], Apple, and Alphabet [GOOGL].

Apple’s share price should also continue on an upward trend for the rest of the year according to Jeriel Ong, an analyst at Deutsche Bank.

The company has seen continued, strong demand for its tech with a “firming outlook” for its upcoming iPhone 12. Ong has lifted his price target to $400, while also raising his annual revenue estimates by 2%,MarketWatchreports. 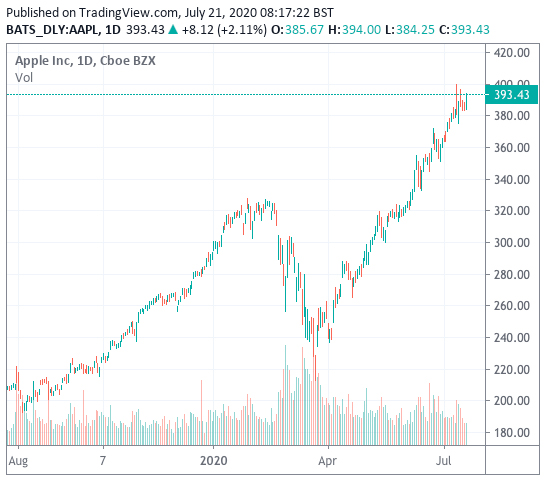 But Lee Wild, head of equity strategy at Interactive Investor, tells Opto he sees some grey clouds ahead for tech stocks.

“The COVID-19 pandemic has failed to take a bite out of the FAANG stocks. In fact, the enforced coronavirus lockdown has played to the hands of the biggest technology players. But an escalation of the US-China trade war could have a contagion effect on the likes of Apple who rely on parts made in China,” Wild says.

“But perhaps the biggest immediate threat, which is not just exclusive to the tech sector, is the deepest depression since at least the Second World War. Firms like Apple which sell expensive premium products could be hit by a longer than expected recession which could have serious implications for profits.”

Zoom’s share price could also be impacted as more people return to offices, but this is expected to be a slow process, with remote working still likely to dominate in the months ahead. 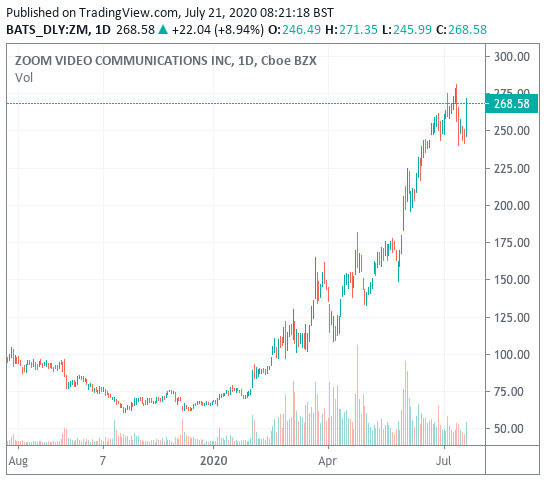 Demand for its software is likely to remain solid, and Zoom has also developed new hardware as a service model, allowing users to lease Zoom-branded desk phones and headsets.

This, some analysts believe, will allow it to battle rival offerings from Slack [WORK] or Microsoft [MSFT] Teams.

“Zoom is removing a friction point, thereby increasing the chances a company will choose its videoconferencing solution over that of a competitor,” Danny Vena writes in The Motley Fool. “None of these companies are resting on their laurels. The battle for virtual meeting supremacy has yet to be decided.”

Investors could face some difficult choices in the second half according to Russ Mould, Investment Director at AJ Bell.

“The number of variables are enormous, as they depend upon how the COVID-19 pandemic pans out and whether it withers or returns for a second or third wave and also the policy response of governments and central banks,” Mould tells Opto.

“A repeat of the last decade or so — low growth and low inflation — will cement the popularity of companies that are seen as capable of offering secular growth, such as tech stocks, biotech stocks, providers of subscriptions to premium content and plays on concepts such as electric vehicles, automation, 5G mobile telecoms, and renewable energy.”

However, another market downturn could dampen risk appetite and even lead to forced selling in these popular stocks.

“Remember that they were all caught up in the initial sell-off as investors scrambled for liquidity and simply sold anything that they could sell,” Mould explains. “Such a scenario would favour cash, bonds and perhaps select equities in defensive areas like pharmaceuticals and consumer staples like food and beverage and food retail.”