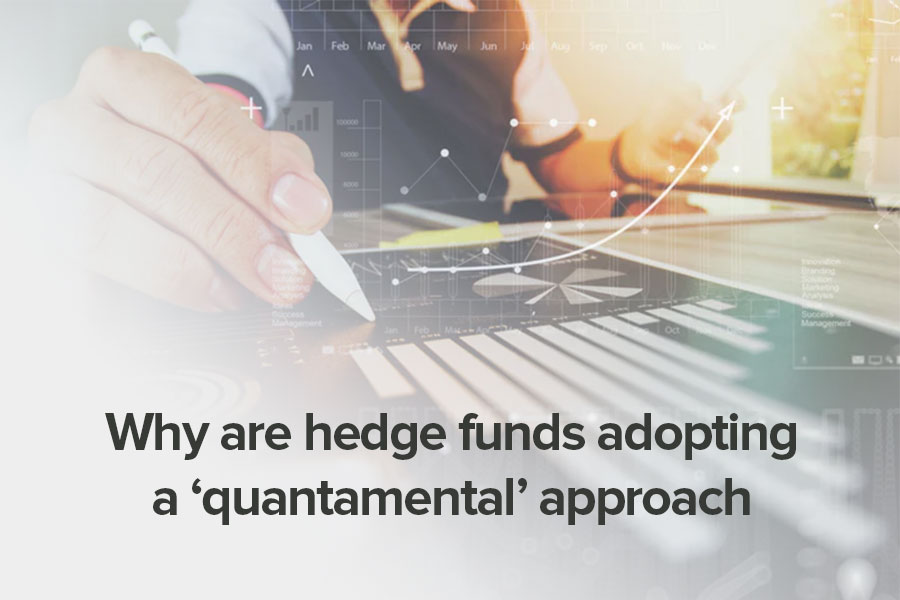 Why are hedge funds adopting a ‘quantamental’ approach?

Big data isn’t just the darling of quant funds, as hedge fund stock pickers dive deep into the numbers to give themselves an edge during unprecedented market upheaval.

Hedge funds and big data are a match made in heaven: numbers, patterns, mountains of historical data, artificial intelligence, machine learning – and not an ounce of human sentiment to throw it off course. So why, then, are the world’s best-known computer-powered hedge funds struggling to handle the current crisis?

Bridgewater Associates, the world’s largest hedge fund, saw its $160bn fund plunge 20% in February and March. Renaissance's Institutional Equities hedge fund — whose founder Jim Simons’ exclusively computer-driven “pure system without humans interfering” had returned on average 15.78% in the six years to 2018 — is down 24% over the past 12 months, including an 18% drop in the first three weeks of March. Finally, the Two Sigma Compass fund, whose computer scientist hedge fund founder David Siegel - a proponent of machine learning-based investment strategies -, has also consistently trounced the market for the past 15 years, but is down 13% in 2020.

“We’re disappointed because we should have made, rather than lost money,” Bridgewater’s founder, Ray Dalio said, while also admitting: “We did not know how to navigate the virus.”

Dalio is one of the hedge fund industry’s most high-profile proponents of the use of artificial intelligence and machine learning in trading decisions. In 2016, he announced plans for an AI system at his Connecticut HQ that would see computers make 75% of all the company’s decisions, including even potentially hiring, firing and resolving disputes between employees, within five years.

The aim is to remove all unnecessary personal emotion that might otherwise cloud the judgement of his hedge fund managers. One Bridgewater employee enthusiastically told the Wall Street Journal the aim was to “make Ray’s brain into a computer”.

The recent fallibility of Dalio, Simons and others provides a glimmer of hope for stock pickers, who have watched helplessly in the past 12 months as some $30bn has flooded away from traditional hedge funds and mutual groups into passive funds and quants — the highest outflow for three years.

Those same stock pickers are now themselves maximising technology to get back their edge. One such was is by embracing big data. However, these funds have gone a step further, combining it with their own magic ingredient the quants deliberately leave out — their own individual human experience, judgement and market instinct.

“Data is the basis of our investment model, but the research and portfolio construction processes still require human judgement,” says Takashi Suwabe, head of equity research and quantitative investment strategies at Goldman Sachs.

“We do not have a computer in the corner simply shooting out trades with no human interaction. Portfolio managers exercise their judgment … to ensure all portfolio positions make sense — that they are economically intuitive. Research success for us is not finding a new stock to invest in, but rather finding a new investment factor that can help improve the way we select stocks.”

Big data offers vast — even infinite — potential. Algorithms tracking market patterns is one thing, but the infinite cumulative power of big data is quite another. Put simplistically, where quants revolve around (largely historical) “factors”, a combination of big data, AI and machine learning can extrapolate rules from a much wider range and scope of information.

This could include social media posts, which produce emotional data, or user-generated content, which registers consumer habits — the vital, previously intangible human element that influences our relationships with businesses and directly impacts the market.

Artificial intelligence can detect and draw conclusions from the tone of a CEO’s voice, natural language processing (NLP) will garner positive or negative sentiment in written text. And in the world of big data, every scrap of information is up for grabs — as evidenced by the GPS system, whose tracking of an Occidental Petroleum [OXY] jet to Nebraska last year revealed to hedge fund managers the company’s “secret” meeting with Warren Buffett.

It wasn’t just the acquisition of the flight path data that was crucial here, it was how it was immediately noted, assessed, its implications understood and then disseminated to hedge fund managers to give them trading opportunities.

The approach has gathered momentum in recent years — Schroders, Fidelity Investments, Capital Group, Invesco and Neuberger Berman are among several traditional fund managers to develop “alternative data” teams since 2017. Indeed, hedge funds’ spend on the tech has soared sevenfold from $232m four years ago to a projected $1.7billion in 2020.

And whereas the purer quants have been around for a few years, it’s this combination of data processing and human decision-making that has developed what’s become known as the “quantamental” approach.

Marko Kolanovic, head of quant and derivatives strategy at JPMorgan Chase & Co, recently predicted that after the next recession “investors and managers will aim to re-introduce more human oversight and discretionary decision-making”. Igor Tulchinsky, founder of WorldQuant, believes the most successful firms of the future “will position their creative human talent to utilise machine capabilities in ways that find more diverse insights. Increasing collaboration will be a critical component.”

The jury’s still out. It would take a brave man — or machine? — to argue against, say, Renaissance’s spectacular 30-year 40% average annual return on its Medallion fund.

But it’s the combination with human experience that may still ultimately prove to have an edge. Data has always been with us, but over centuries it’s traders’ nuanced understanding of it that has been key.

How, for instance, can computers be trusted to react appropriately to the resignation of every president, prime minister or central bank governor when each one’s personality is different, with the power to affect every single investor’s emotions in a slightly different way? How can exclusively machine-formed strategies that use only previous patterns possibly play out in the face of a completely unprecedented global crisis, such as — to pick a random example — a raging virus? The recent travails of Bridgewater, Renaissance, Sigma and the rest perhaps provide the answer to that.